A recent report in The Register suggests that we might be currently overestimating the degree to which the world will warm with increasing carbon dioxide.

Climate sensitivity is, crudely, the slope of the relationship between CO2 levels and average world temperature. It is usually expressed as the number of degrees Celsius that will result from a doubling of CO2 concentration. If everything else were equal and the only effect was driven by the properties of CO2 then the sensitivity would be about 1°C. But many other factors also change in the real atmosphere, for example the concentration of water vapour, also a powerful greenhouse gas. So scientists have to find ways to estimate those other effects based on models or observations of the real, very complicated, atmosphere. The current consensus seems to centre around 3°C.

The science reported by The Register reports a recent estimate much lower than the consensus:

When [the] researchers instead calculate a probability interval of what will occur, including observations and data up to 2010, they determine with 90% probability that global warming from a doubling of CO2 concentration would lie between 1.2°C and 2.9°C.

This maximum of 2.9°C global warming is substantially lower than many previous calculations have estimated. Thus, when the researchers factor in the observations of temperature trends from 2000 to 2010, they significantly reduce the probability of our experiencing the most dramatic climate change forecast up to now.

Berntsen and his colleagues' results derive in large part from taking account of the way that global temperatures have remained flat for the last fourteen years or thereabouts, instead of climbing as they ought to have done with increased carbon levels.

“The Earth’s mean temperature rose sharply during the 1990s. This may have caused us to overestimate climate sensitivity," explains the prof.

Two interrelated questions arise: is this new estimate plausible? and is the lack of recent warming enough to force a reassessment of climate models?

Could sensitivity it be lower than 3°C for a doubling of CO2e?

Yes, it could, as the IPCC have said in their assessment reports, and as the science has said for decades. This single new study suggests a range of 1-2.9°C, which has huge overlap with the IPCC range. It is therefore consistent with IPCC estimates, and while it adds new data and new analysis to the existing large body of studies, it does not overturn them.

Is their method sound?

The result declared in the press release should give a scientific sceptic some cause for concern as to their method:

When the researchers at CICERO and the Norwegian Computing Center applied their model and statistics to analyse temperature readings from the air and ocean for the period ending in 2000, they found that climate sensitivity to a doubling of atmospheric CO2 concentration will most likely be 3.7°C, which is somewhat higher than the IPCC prognosis. But the researchers were surprised when they entered temperatures and other data from the decade 2000-2010 into the model; climate sensitivity was greatly reduced to a “mere” 1.9°C.

If 10 years of data causes that much of a change to the result obtained from 250 years of data, it's quite possible that their method is over-weighting the most recent data. It's giving too much weight to a small number of recent years. Because the number of years is small, weather noise will dominate climate trends. It's worth noting at this point that some of the Cicero work behind this press release was unpublished at the time of the press release, and none of it has yet been confirmed by other studies.

No, because even in that incredibly optimistic scenario which is not supported by the vast majority of empirical data and studies, we're on course to raise CO2e from pre-industrial levels of ~280ppm to ~1000ppm, which would lead to a raising of temperature of 3-4°C, which puts us into very dangerous territory.

Is it a safe bet to assume that sensitivity is much less?

No, it's an insane gamble. And that's because the stakes are so high - this is an asymmetric bet. Let's take an extremely optimistic case, one that is so optimistic that it defies the known science, that there's only a 5% chance that forcing is 3°C, and a 95% chance that forcing is 1°C. The cost of decarbonising the economy is uncertain - it may be a net positive, or around 1% of GDP, and almost certainly below 5.5% of GDP. So, even in this extreme case where the vast bulk of climate science is wrong, the bet offered is at 95%:5%; the stake is human civilisation, and the potential value of a win is -1% to 5.5% of global GDP. That's not a sane one-off bet, it's an insane gamble. If we were going to average it out over tens of thousands of cases, then statistics would be on our side. But this is a one-shot gamble, the odds are for a high forcing, and the stakes are way way in favour of decarbonisation.

Has there been a lack of warming over the last 14 years?

No, not unless the laws of physics have changed. And we've got no reason to believe they have. We know the sun has continued to irradiate the Earth, at the levels it has for many years. And we know that the Earth's insulation, from greenhouse gases, has increased - we know that from huge amounts of empirical observation. So we know that the global heat content has continued to rise - that much is basic thermodynamics. A lot of heat gets stored in oceans; that means that it doesn't show up in surface temperatures, until we get one of those periodic releases of heat from oceans, which then boost global surface temperatures thereafter.

The FUD meme that has confused some non-scientists, that there has been a lack of warming over the last 14 years, has come about because there is no clear trend in surface temperatures over the last 14 years. Now, no clear trend is not the same as a flat horizontal trend, any more than it's the same as a rising trend or a falling trend. It's no clear trend. No clear trend doesn't mean you get to pick and choose the trend that suits your fancy; it means that there's insufficient evidence for what the trend is, in that particular dataset. That shouldn't be surprising: the surface temperatures of a small number of years are more likely to indicate the noise of weather, rather than trends in climate. Trends in climate tend to show up at the scale of 30 years or so, and over that timescale, the warming trend is unambiguous: 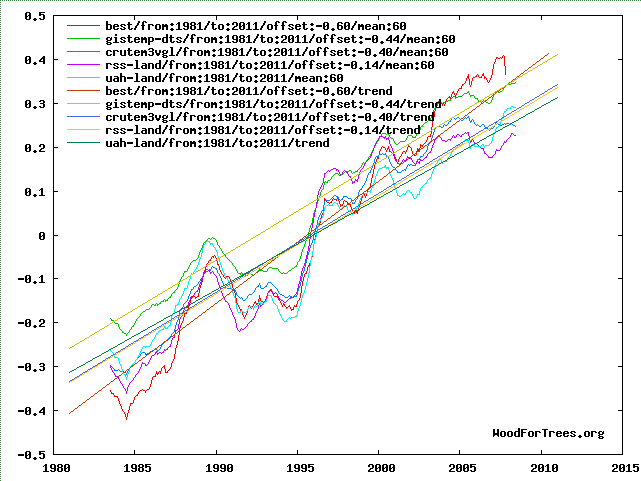 9
Did the IPCC obfuscate the evidence in a way that obscures the discrepancy between previous climate models and recent observations?
5
Does physics give a climate sensitivity to carbon dioxide of about 3°C?
4
Does each doubling of CO2 cause a 2-4°C increase?

5
Does physics give a climate sensitivity to carbon dioxide of about 3°C?
11
Can some simple, old models of the effect of CO₂ predict temperature better than complex modern climate simulations?
31
Does this graph show climate-change predictions don't meet observations?
9
Did the IPCC obfuscate the evidence in a way that obscures the discrepancy between previous climate models and recent observations?
15
Is climate change currently good for the world economy?
39
Is Matt Ridley's assertion that the most extreme of the IPCC climate projections is based on very implausible assumptions correct?
48
Does the logarithmic nature of global warming invalidate climate change claims?
4
Does each doubling of CO2 cause a 2-4°C increase?
8
Publication Bias in Climate Sensitivity Estimates