There are some claims on anti-death penalty sites that death penalty (in USA) costs are significantly more then costs of long-time imprisonment.

The death penalty is much more expensive than life without parole because the Constitution requires a long and complex judicial process for capital cases. This process is needed in order to ensure that innocent men and woman are not executed for crimes they did not commit, and even with these protections the risk of executing an innocent person can not be completely eliminated.

If the death penalty was replaced with a sentence of Life Without the Possibility of Parole*, which costs millions less and also ensures that the public is protected while eliminating the risk of an irreversible mistake, the money saved could be spent on programs that actually improve the communities in which we live.

Is this calculation accurate? Or does life-long imprisonment include almost all same costs? e.g. appeals, careful investigations, higher costs to house, etc.

The source that you provided does a very good job in citing its credible sources and should suffice alone. But it touches only California, and it's not the only source out there and there are many others (although some cite the same sources). There are news reports about the high costs of execution in different US states:

In Illinois (In an article about Iowa):

The cost of prosecuting death penalty cases makes them difficult for governments, said Andrea Lyon, an Illinois death penalty defense lawyer. She noted that one reason Illinois abolished capital punishment two years ago was because it cost the state so much to prosecute.

“The cost to try, convict and imprison someone for life is a quarter of what it costs to give them the death penalty,” she said.

In North Carolina, Sen. Floyd McKissick, D-Durham, recently told the House Ways and Means Committee, "We might want to, at some point, revisit whether the death penalty ought to be imposed, or whether we ought to impose a life sentence without parole, because it's a strong, persuasive and convincing argument when you talk about the astronomical expense of capital cases."

Since 1978 Tax payers have spent more than 4B dollars on capital punishment in California alone, or about 308M dollars for each of the 13 executions carried out since then.

The Death Penalty Information Center also has a page with the costs of execution in different states, and while they are an organisation that apposes the death penalty they cite credible sources for their information.

The counter argument to the cost is that the capital punishment is a moral choice that the American/each state's public wants and they are willing to pay the appropriate price, as cited in this article about the failure of prop 34 in California:

"The people of California sent a clear message that the death penalty should still be implemented for those who commit the most heinous and unthinkable crimes," said McGregor Scott, the former U.S. attorney for Sacramento who served as the opposition's co-chairman.

HOWEVER, it should be noted that it's not the process of the execution itself that costs all that money (The process costs only around 500$), but the process of lengthy litigation, multiple appeals and the fact that a prisoner sits on Death Row for a long time, in 2010 the average was 178 months, which is almost 15 years (according to the Bureau of Justice) contribute to the high costs of the capital panishment: 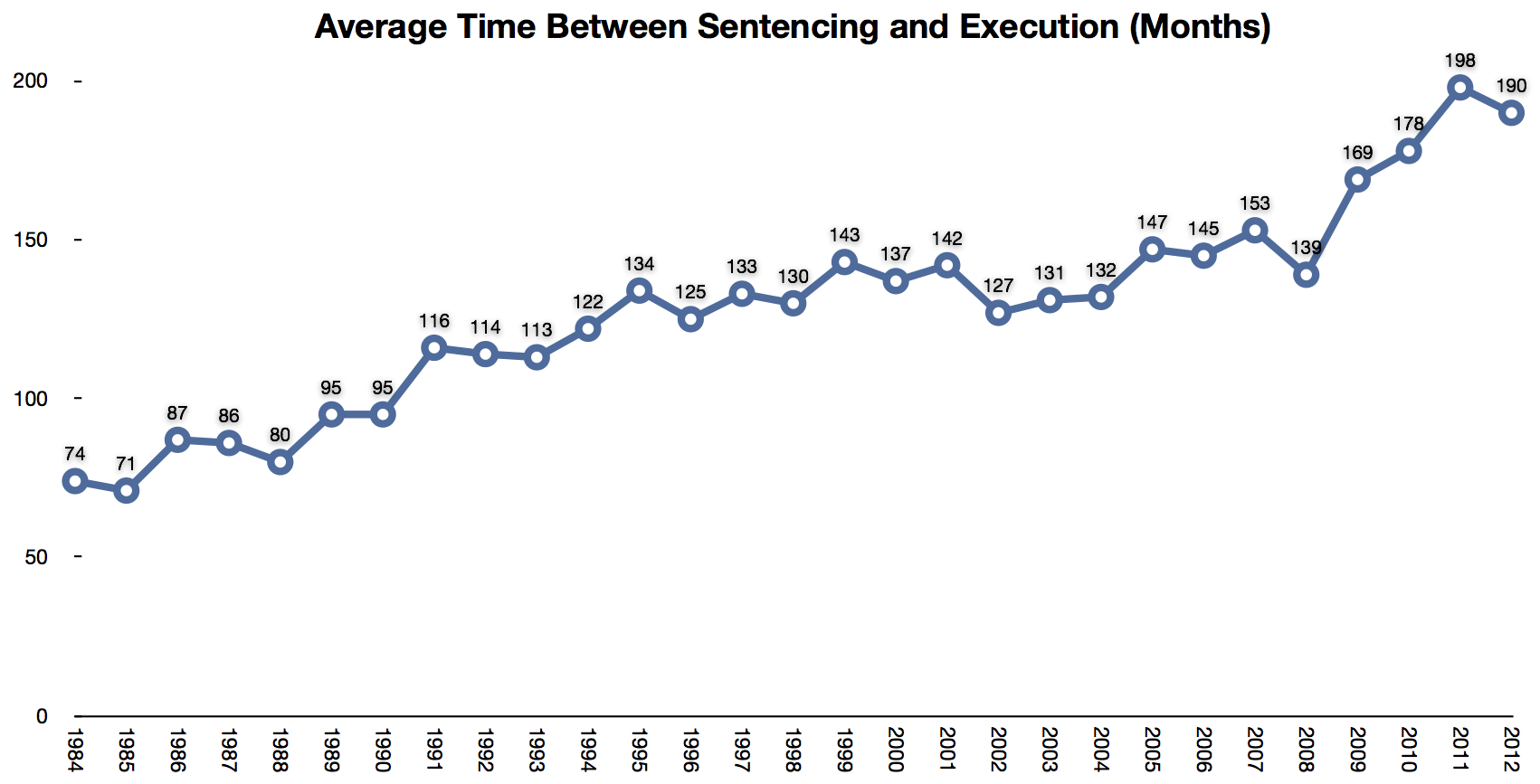 And (at least in California) inmates on the death row prefer to stay on death row rather than get Life without Parole:

That is so counter-intuitive to what most people believe about capital punishment that its worth repeating. People on death row, not just folks in an abstract all night dorm room discussion about whether death or LWOP is worst, but folks actually condemned to die, prefer to continue with their death sentence.

Many prisoners hold out the hope that their conviction will be overturned and they will be able to go home. Ending their right to court appointed lawyer on habeas would close that door forever to most if not all of them (a handful might find lawyers to voluntarily continue their appeal).

Voters who support the death penalty should think carefully this November before they vote “No.” If you defeat Proposition 34, you will be continuing to give people convicted of capital murder exactly what they most desperately want — a lawyer that will help them get out of prison.

This lengthy process is in place to minimize the number of innocent people that will get executed as well as making sure that the defendant/inmate has exhausted all possible legal options to prove their innocence. In China, Saudi Arabia, and Iraq (3 of the other 4 world "leaders" in executions in the year 2011, together with the US), it's easier, quicker and cheaper to execute a person:

All trials in China are fundamentally flawed – with courts routinely relying on evidence extracted through torture or other ill-treatment, and defendants frequently denied the right to choose their own lawyers.

Many of those executed over the past years were foreign nationals, mostly migrant workers from developing countries in Africa and Asia. They are disproportionately affected by the secretive and summary nature of the criminal justice process.

The accused were often condemned to death after trials lasting just a few minutes.

Not the answer you're looking for? Browse other questions tagged united-states law .

33
Does the death penalty in California cost more than $300m per execution?

62
Is the death penalty an effective deterrent?
16
Are guns in the USA used 80 times more often to protect life than to take it?
33
Does the death penalty in California cost more than $300m per execution?
6
Do Virgina and Connecticut have the death penalty for those who work on Sunday?
31
Is the total cost of treating the uninsured in emergency rooms more expensive than government-subsidized urgent care would be in the US?
23
In California, does it cost more to send someone to prison than to send them to Stanford?
16
Is the penalty for a woman having an abortion more severe than the penalty for rape?
13
Do the Republican tax cuts cost more than forgiving student debt?
69
Does a COVID-19 test in USA cost consumers more than $US3000?
79
Has the US COVID-19 lockdown resulted in more years of life lost than COVID-19 itself?