Is a lack of breakfast the #1 brain damaging habit?

I came across the following list. "Top 10 biggest brain damaging habits". Although they're all interesting "food" for skepticism, I will focus on #1, because I find this a peculiar claim. Some other claims are already on this site, e.g. about working your brain during illness (unanswered though!). 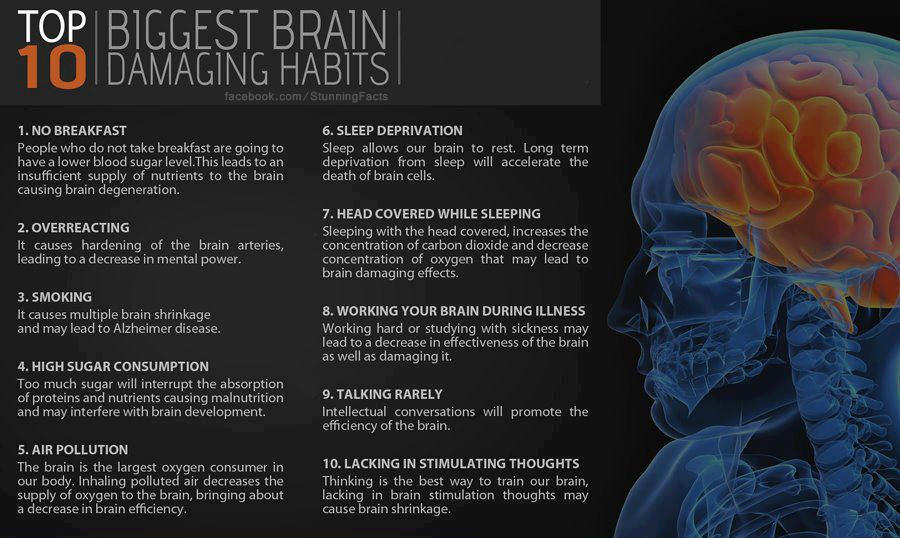 This question is also about breakfast, but does not specifically address the issue of the brain.

This question is hard to answer because it includes the wrong assumption that dietary calorie restriction damages the brain. This assumption forms the basis for the assertion that "lack of breakfast" is "brain damaging".

So I would answer it in two steps.

Much to the contrary, there is ample evidence suggesting that calorie restriction (CR) increases general health, and lengthens life.

I quote the paper below on studies with humans:

This evidence consists of the finding that risk factors for atherosclerosis and diabetes are markedly reduced in humans on CR. Humans on CR also show some of the same adaptations that are thought to be involved in slowing primary aging in rats and mice. These include a very low level of inflammation as evidenced by low circulatory levels of c-reactive protein and TNFα, serum triiodothyronine levels at the low end of the normal range, and a more elastic “younger” left ventricle (LV), as evaluated by echo-doppler measures of LV stiffness.

From the same paper, some anedoctal evidence:

Okinawans, because of poverty, were so severely calorie restricted that their growth was stunted. However, public health measures and quality of the diet on Okinawa were sufficiently good to prevent the high prevalence of nutritional deficiencies and infectious diseases present among the poor in many third world countries. It is interesting, relative to the possible effects of CR on human longevity, that there are more centenarians per 100,000 people in Okinawa than in other parts of the world including the USA and Western Europe (Chan et al., 1997).

And from the one on brain effects of CR:

These beneficial effects also extend to the maintenance of brain cognitive functions at later age and to the prevention, at least in rodents, of brain senescence and associated neurodegenerative disorders.

Yes, but not because calorie restriction is generally bad. Some studies (see below) suggest that skipping breakfast might lead people to overeat later in the day, which in turn would cause obesity.

On whether this is bad for the brain,

The evidence indicates that breakfast consumption is more beneficial than skipping breakfast, but this effect is more apparent in children whose nutritional status is compromised.

Based on this evidence, I believe there is no direct causal relationship between skipping breakfast, low blood sugar and brain degeneration (as the original statements implied).

Not the answer you're looking for? Browse other questions tagged nutrition neurology .

47
Is breakfast the most important meal of the day?
18
Is a Full English Breakfast good for you?
7
Can skipping breakfast increase risk of heart disease?
11
Is studying while sick bad for your brain?

53
Do the Left Brain and Right Brain have different functions?
17
How much do we know about the brain?
12
Do we need “hot” breakfast food?
18
Is a Full English Breakfast good for you?
8
Is brain piercing real?
8
Death of brain cells
5
Is it a healthy habit to walk after having food?
0
Does the right eye feed information to the left brain hemisphere while the left eye feeds information to the right brain hemisphere?