Does Monsanto have a bee patent?

In 2011, Monsanto acquired a company specialised in bees. Claims are circulating on the internet about an alleged Monsanto bee patent. In its most radical form, the claim is: 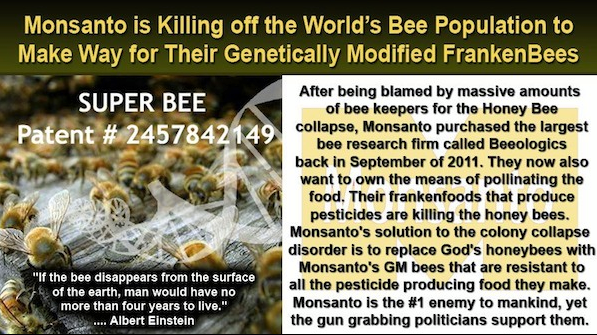 After being blamed by massive amounts of bee keepers for the Honey Bee collapse, Monsanto purchased the largest bee research firm called Beeologics back in September of 2011. They now also want to own the means of pollinating the food. Their frankenfoods that produce pesticides are killing the honey bees. Monsanto's solution to the colony collapse disorder is to replace God's honeybees with Monsanto's GM bees that are resistant to all the pesticide producing food they make. Monsanto is the #1 enemy to mankind, yet the gun grabbing politicians support them.

Now this contains a number of allegations and claims, some quite wild, but it contains some truths if other sources are to be trusted. To quote a source that appears more reliable, although not objective, investigative journalist Maryam Henein writes:

Considering that the honey bee genome has been sequenced, how long before we bear witness to a genetically modified bee? If seeds are any indication, Apis melifera may also soon belong to Monsanto. Kill the bees with GMO plants and pesticides, offer a band-aid solution by creating a bee that is resistant to all the crap peddled on the market and then “persuade” beekeepers to buy Monsanto bees or else. It’s wicked genius.

But I am sure Monsanto and many others would call all of this paranoid phooey. Take one well known scientist and beekeeper’s opinion on the subject: “Honeybees aren’t an organism that anyone who understands anything about their molecular biology would advise as a subject for genetic modification,” he recently told colleagues on the online Bee List. “Do you really think that Monsanto envisions that there would be any substantive return on investment on a patented bee?”

Personally, I certainly don't trust information coming straight from Monsanto. However, information from GMO-critical activists has also been mixing facts with semi-truths and disinformation. Googling for patent 2457842149 is not very helpful.

Is there a "bee patent"? If yes, what does this mean? If no, is there any truth is the story by Maryam Henein?

(I'm not convinced this is a complete answer, but I am not sure what else to add.)

Nitzan Paldi is a (random) researcher at Monsanto, who was formerly part of Beeologics.

Paldi is one of the inventors on a US Patent 8,097,712, which is assigned to "Beelogics". (Note the misspelling on the name, which is why I took the detour to show it is the same company, not a similar sounding one.)

The abstract of the patent is:

The patent appears to be proposing a form of innoculating existing bees against virus by feeding them innocuous strands of RNA. It isn't replacing the bees with GM versions, but trying to prevent their hive collapse by being infected by viruses.

As will all discussions about patents, it is important to understand that there is a big difference between applying for a patent and having firm plans to produce a product. It does not even prove that an implementation has been made - patents can be speculative.

The origin of this claim is a 25 January 2012 Tumblr article The Buzz Behind the Monsanto/Beelogic Acquisition by journalist and film-maker Maryam Henein.

In the original article it is clear that the number "2457842149" is just a joking/hypothetical patent number, associated with the author's prediction that eventually a genetically modified bee will be produced.

Considering that the honey bee has been sequenced, how long before we bear witness to a genetically modified bee? I’ve been saying this since 2008 for the record!

A genuine example of a patent application for a genetically modified bee assigned to the Bayer Corportion is:

Not the answer you're looking for? Browse other questions tagged gmo bees .

7
When fed to rats, does GM Soy cause smaller babies?
5
Has European Patent Office granted Monsanto a patent on natural broccoli seeds and florets?
11
Are GMO crops to blame for farmer suicides in India?
21
Does Roundup harm mammals?
6
Do Monsanto GM foods cause gluten-related illnesses?
11
Do honeybees disrupt native pollinators in North America?
3
Does Propolis in toothpaste protect the gums and the mouth area?