When fed to rats, does GM Soy cause smaller babies? 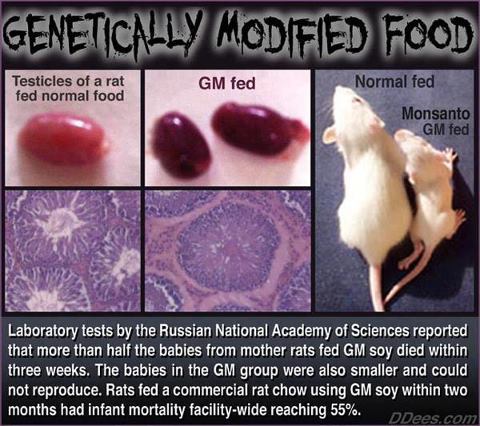 Laboratoy tests by the Russian National Academy of Sciences reported more than half the babies from mother rats fed GM soy died within three weeks. The babies in the GM group were also smaller and could not reproduce. Rats fed a commercial rat chow using GM soy within two months had infant mortality facility-wide reaching 55%.

I note that most of the claims have no controls: did the babies of non-GM soy-fed mothers have mortality > 55%? Could any of the babies reproduce?

However, the "smaller" claim involves a control, and hence is the one I am interested in.

So, was this a legitimate study? If so, were these the conclusions? (Double points if the result was reproduced.)

In a correspondence on that article in Nature Biotechnology the following criticism of the study are listed:

Although Ermakova states that she received "soy clearly labeled as GM and non-GM soy," she still has not established the identity of the material tested, which is of paramount importance to an animal feeding study.

The Archer Daniels Midland (ADM) catalog states and B.C. contacted ADM on October 20 and November 5, 2007, to verify that they do not sell—and have never sold—a 100% GM-soy product containing the RR-40-3-2 line to which Ermakova refers.

The identity of the soy was not tested in the study, it was not verified if the GM and the non-GM soy were actually comparable. The company that the GM soy was allegedly procured from even states that they never sold such a pure GM-soy.

The authors are also state that the weight and number of pups are indicative of diet or environmental problems. They also criticize that the cause of death was not determined in the study.

The authors also cite three studies that contradict the results obtained by Ermakova and found no negative effect of the transgenic soy on rats:

We conclude then, that Ermakova's research relied on experimental designs that fall short of internationally accepted norms, with animals handled in such a way that even control lines were negatively affected. The feeding studies used materials that were characterized inadequately, incorrectly or not at all. Thus, no scientific conclusions can be drawn from the work.

Not the answer you're looking for? Browse other questions tagged gmo .