Were more than a half of all Silicon Valley tech companies founded by immigrants between 1995 and 2005?

A new book caught my eye this week. It’s called The Immigrant Exodus by Vivek Wadhwa, a former tech entrepreneur who now studies and lectures on immigration. He has some fascinating findings. Wadhwa says between 1995 and 2005, more than a half of all Silicon Valley tech companies were founded by immigrants.

Were more than a half of all Silicon Valley tech companies founded by immigrants between 1995 and 2005?

"Were more than a half of all Silicon Valley tech companies founded by immigrants between 1995 and 2005?" Yes, it seems so.

This is, however, much higher than the average in the U.S:

The notes below probably explains the peak in Silicon Valley:

Almost 80% of immigrant-founded companies in the US were within just two industry fields: software and innovation/manufacturing-related services. (p.4)

!Chart 6: Breakdown of Engineering and Technology Companies Founded by Immigrants from 1995 to 2005 by Industry

It is noteworthy that immigrants from China and India both constitute much less than 1% of the total U.S. population. (p.6)

... Indians account for more than 25% of engineering and technology immigrant founders. 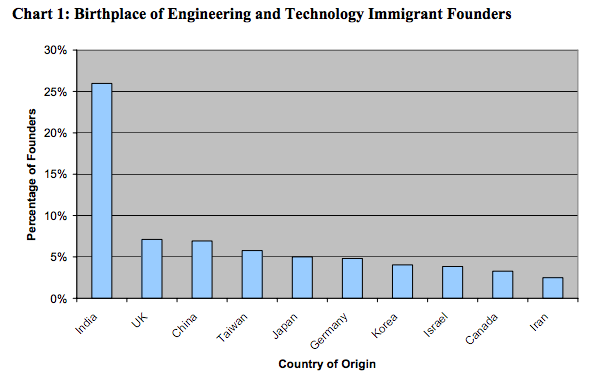 They also seem to have their fair share in PCT applications:

6
Are two thirds of CEOs in Silicon Valley from South Asia or Asia?

10
Does pumping gas when the tank is half full and on the low flow setting provide an economic benefit?
6
Has the Catholic Church lifted more people out of poverty than any other civic institution?
4
Were nearly all founders of large companies existing in mid 20th century uneducated “rude mechanicals”?
7
Almost all the US jobs created between 2005-2015 “are temporary” (alt-work)