Did the moon's tidal effect sink the Titanic?

I came across an absurd title on MailOnline, "Did the MOON sink the Titanic? Freak tides caused icebergs to fill shipping lanes 100 years ago," where a claim is made:

The 'once-in-many-lifetimes' event brought together the Moon's closest approach to the Earth for 1,400 years, a near encounter between the Earth and the Sun, and a spring tide. All these factors contributed to abnormally high sea levels which helped dislodge grounded icebergs and send them into the shipping lanes of the North Atlantic, [...] .

Did the moon's tidal effect sick the Titanic?

moon oceanography titanic
share|improve this question
edited May 19 '16 at 17:39

Not directly, but there was an unusual tidal event in the preceding months that may have contributed to the unusual number of icebergs in the shipping lanes in Spring 1912.

“Of course, the ultimate cause of the accident was that the ship struck an iceberg. The Titanic failed to slow down, even after having received several wireless messages warning of ice ahead,” Olson said. “They went full speed into a region with icebergs—that’s really what sank the ship, but the lunar connection may explain how an unusually large number of icebergs got into the path of the Titanic.”

Olson and others wrote an article detailing this theory that was published as the lead feature in the April 2012 issue of Sky & Telescope, a non-peer-reviewed but well-respected magazine.

Essentially the article makes the case that an unusual combination of forces would have led to particularly high tides and that these incrementally higher tides may have floated some icebergs that otherwise have stayed grounded and perhaps, but for this, Leo and Kate would have lived happily ever after.

I imagine that the only way one could prove this theory would be to examine the iceberg in question and see if it had signs of having been shallowly grounded.

I have the article in question and could answer specific questions. I believe that Sky & Telescope makes their back-issues available for purchase on iOS devices.

This illustration, taken from the article, shows the tidal forces: a combination of spring tides (when the Moon, Earth, and Sun are aligned), perigean ides (when the Moon is nearest Earth in its elliptical orbit), and perihelion (when the Earth is closest to the Sun). 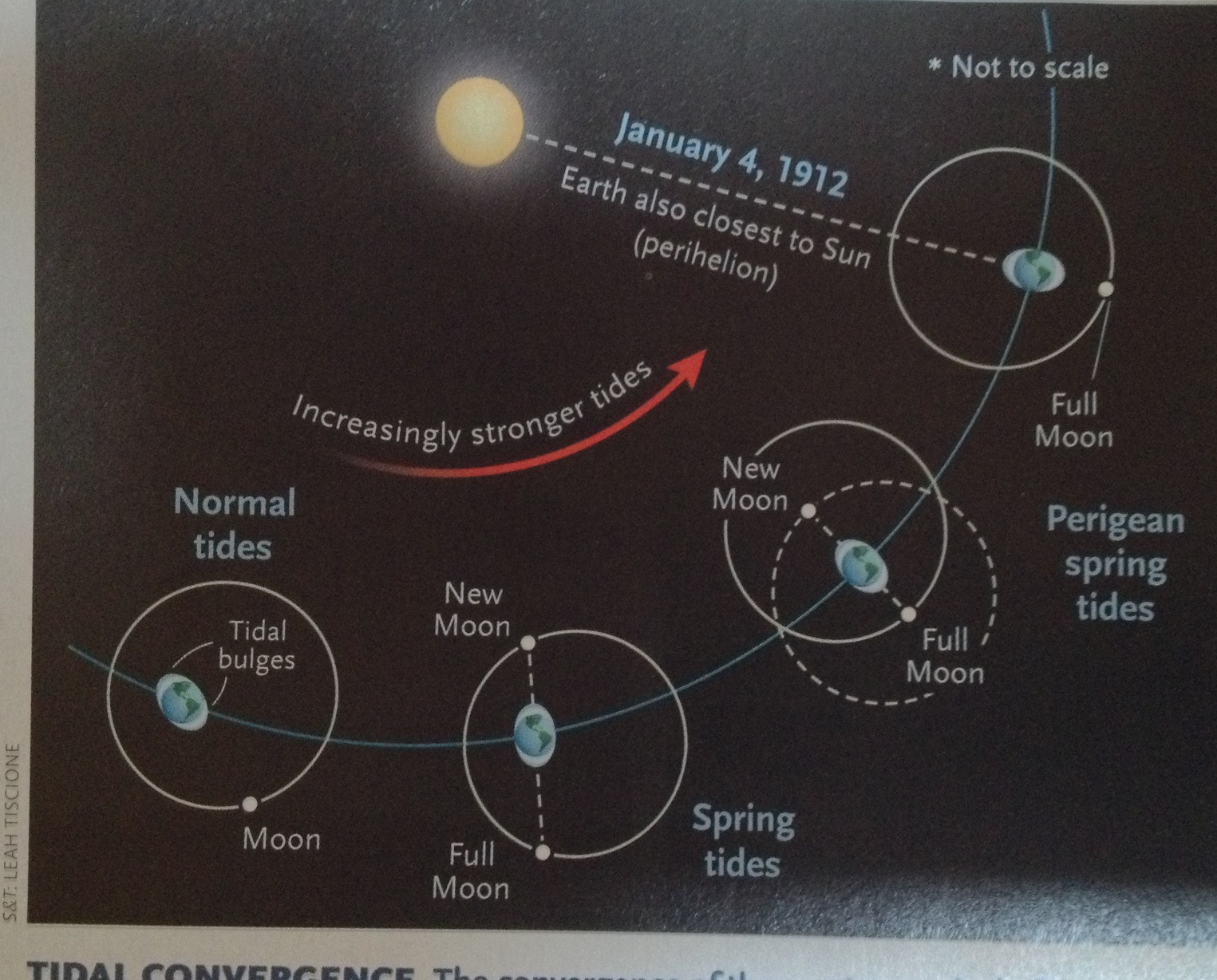 Not the answer you're looking for? Browse other questions tagged moon oceanography titanic .

6
Was a mirage involved in the Titanic's sinking?

3
Do people with mental illnesses feel the effect more during the full moon?
48
Was the Titanic ever publicised as “Unsinkable”?
13
Is the ninth wave the largest?
11
Does the 'super-moon' have a measurable effect on probability and magnitude of earthquakes?
11
Did passengers of the Titanic predict/foreshadow its sinking?
120
Did US flags on the moon turn white?
13
Is there a 2.5 mile diameter object crawling along the Pacific floor?