Did George W. Bush spend 32% of his presidency vacationing, versus Barack Obama's 5.2%? 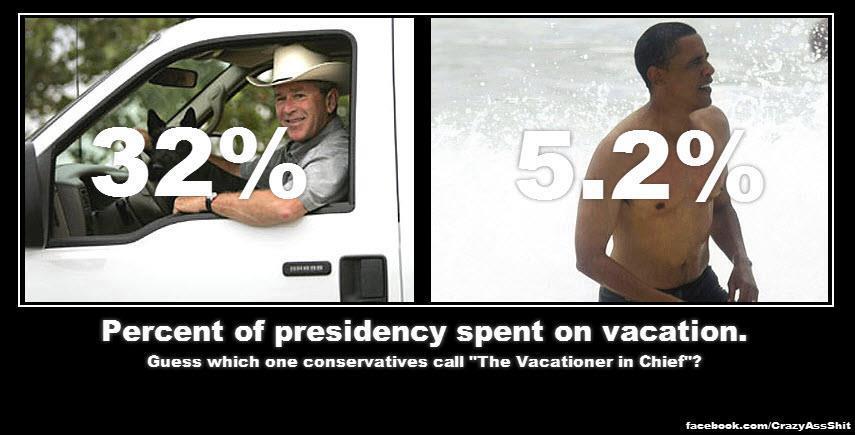 [Picture of George W. Bush] 32% [Picture of Barack Obama] 5.2%
Percentage of presidency spent on vacation.
Guess which one conservatives call "The Vacationer in Chief"?
facebook.com/CrazyAssShit

While I do recall hearing about the large number of so called vacation days George Bush took on Meet the Press, I am slightly skeptical that President Obama's vacation days were counted in the same manner.

Are these figures accurate?

What method was used to arrive at these figures?

There is abundant evidence that Obama takes less vacation than past presidents. George W Bush was notorious for taking a lot of time away from the Whitehouse, most of it at his ranch. Here are some articles and quotes:

There is no date on when the claim was for or when it was made, so it is impossible to know if the Obama percentage is correct at whatever time its author made them.

But based on the entire two terms of both presidents and according to Cleveland.com:

This is around the same amount as claimed for Bush, but more than twice the number claimed for Obama. However, the central point of Obama's vacation length being less holds true.

But a President is never really on "vacation." The job and responsibilities go with him wherever he is.

Unlike legislators, the President must be available 24/7 for security or or other urgent matters. Since "work on the road" is essentially a job requirement, it's hard to say what part of the President's time are spend working vs vacationing.

Second, as Politifact points out, the "vacation" patterns of Bush and Obama were very different since Bush owned a secondary residence in Texas which accounted for a large part of his "vacation" days.

Obama doesn’t own a vacation home, unlike Bush, who owned his ranch. So while Bush essentially used the ranch as as a working White House, Obama has traveled to a variety of destinations

EDIT: There is a additional suggestion by the image that conservatives call Obama "vacationer in chief". That was done by at least the Washington Examiner.

1
Did George Bush take over a year of leave as President?