Can increased doses of morphine speed up dying?

Today I heard a doctor state, about the treatment of a dying person:

We will increase the morphine to ease the level of pain the patient experiences. But please note that even though many people think so, this morphine will not speed up dying.

He claims (if I grasped the English terms correctly) that morphine is only for "palliative care". He hints at a claim held by others to the opposite: that morphine doses can be subtly increased to function as a form of assisted suicide, a.k.a. euthanasia.

Is either of these claims true?

As noted in the comments, "a doctor said" is not quite a notable/sourced claim. However, there are quite a few links to be found on the subject, here are a few:

He hints at a claim held by others to the opposite: that morphine doses can be subtly increased to function as a form of assisted suicide, a.k.a. euthanasia.

Canadian law makes a distinction based on the doctor' intent: they're allowed to give morphine in order to manage pain, even if that shortens life.

The policy of the Ontario coroner is illustrative of the practice in this regard. Palliative care that results in death is not considered to be criminal, so long as four conditions are satisfied: (1) the care must be intended solely to relieve suffering; (2) it must be administered in response to suffering or signs of suffering; (3) it must commensurate with that suffering; and (4) it cannot be a deliberate infliction of death. Documentation is required, and the doses must increase progressively.

There is no precedent in this area. There have never been any legal convictions for providing such treatment and although there are no decided cases on point, a reference was made to the practice of providing potentially life-shortening treatment with the purpose of alleviating suffering in the Rodriguez case. The real issue in that case concerned assisted suicide under section 241 of the Criminal Code. Mr. Justice Sopinka, writing for the majority of the Supreme Court of Canada, however, drew a legal distinction, based on intention, between the administration of drugs that are likely to hasten death on the one hand and assistance in suicide on the other. Without deciding the issue, by implication he seems to have suggested that if the intention is to alleviate suffering, it is legally permissible to provide treatment notwithstanding that this may hasten death.

The above says, "potentially life-shortening" and "likely to hasten".

Some of the paragraphs after that imply that the expert witnesses disagreed about whether it will in fact shorten life, for example:

Professor Schafer, testified: If we think about it, what the palliative care physician frequently does in giving an adequate dose of painkilling medication is hasten the death of the patient, entirely justifiably in my judgment, and entirely justifiably in the judgment of every one of my philosophical and legal colleagues whose briefs I have read.

Dr. Macdonald stated: Another area of confusion is whether or not we are killing the patient with these drugs. That was a subject of correspondence I had with the committee. People think, for example, if we increase the dose of opioids so that a person is stuporous, we may kill the patient if we give them a little more. In my experience, that is highly unlikely to happen. Patients rapidly become tolerant to the respiratory effects of opioids, morphine and like drugs. If we give them a large dosage of a drug, we may sedate the patient but it is unlikely that the patient would die of our drug. They may die of pneumonia or an associated problem which sedation might make more likely to come about, but to die directly of a drug effect is unusual.

The last two sentences above implies that it shouldn't cause death directly, but may indirectly.

Morphine is a pain killer. It thus have a palliative function, in that it makes a patient feel better. For example it is used for cancer patients:

Summary
An expert working group of the European Association for Palliative Care has revised and updated its guidelines on the use of morphine in the management of cancer pain. The revised recommendations presented here give guidance on the use of morphine and the alternative strong opioid analgesics which have been introduced in many parts of the world in recent years. Practical strategies for dealing with difficult situations are described presenting a consensus view where supporting evidence is lacking. The strength of the evidence on which each recommendation is based is indicated.

—Morphine and alternative opioids in cancer pain: the EAPC recommendations

On the other hand, it is also deadly at high dosages: 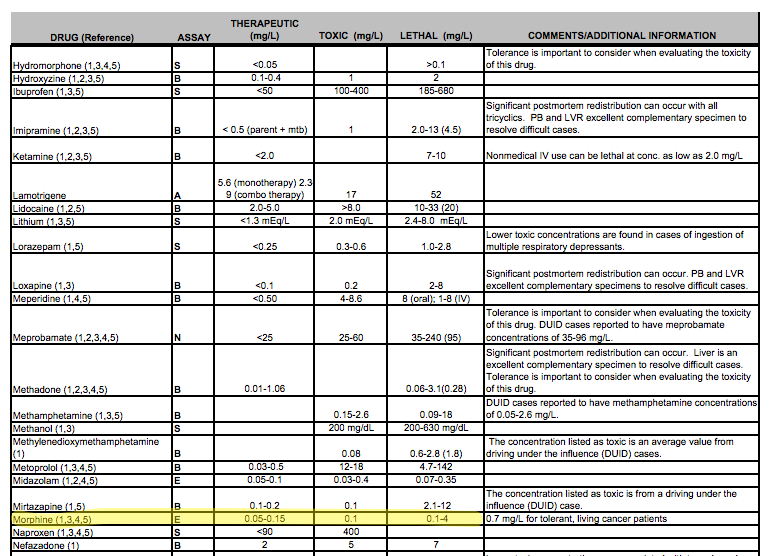