Is the judicial system biased against men?

We often hear the claim that men are treated unfairly in relation to women by the Judicial System.

One example of the claim can be found here.

The article claims that:

Women shoplifters were less likely than comparable males to receive a prison sentence. They were also more likely to be sentenced to a community penalty or to be discharged....

Men and women stood an equal chance of going to prison for a first violent offence. However among repeat offenders women were less likely to receive a custodial sentence.

Women first offenders were significantly less likely than equivalent men to receive a prison sentence for a drug offence, but recidivists were equally likely to go to prison.

In addition, the data of the UK Criminal Justice System, which is detailed and broken down in several different categories, seems to also imply prejudice. Specifically, women are arrested in 18% of the cases, but convicted only in 6% of the cases, or men are 3 times more likely to be get convicted, in relation to their arrests.

So my question is: Are men actually treated unequally wrt women by the judicial system. Is there prejudice against men?

If there are any other sources that could confirm/contradict the claim, they are welcome.

The United States criminal justice system does treat men more harshly than women, at least as far as sentencing decisions are concerned.

Source - The Independent and Joint Effects of Race/Ethnicity, Gender, and Age on Sentencing Outcomes in U.S. Federal Courts

Using data compiled by the United States Sentencing Commission, we examine the independent and joint effects of race/ethnicity, gender, and age on sentencing decisions in U.S. federal courts. We find that Hispanics and blacks, males, and younger defendants receive harsher sentences than whites, females, and older defendants after controlling for important legal and contextual factors.

The following table shows that women are around 42% less likely than men to be sent to jail and that women receive sentences that are approximately 25% shorter than men. 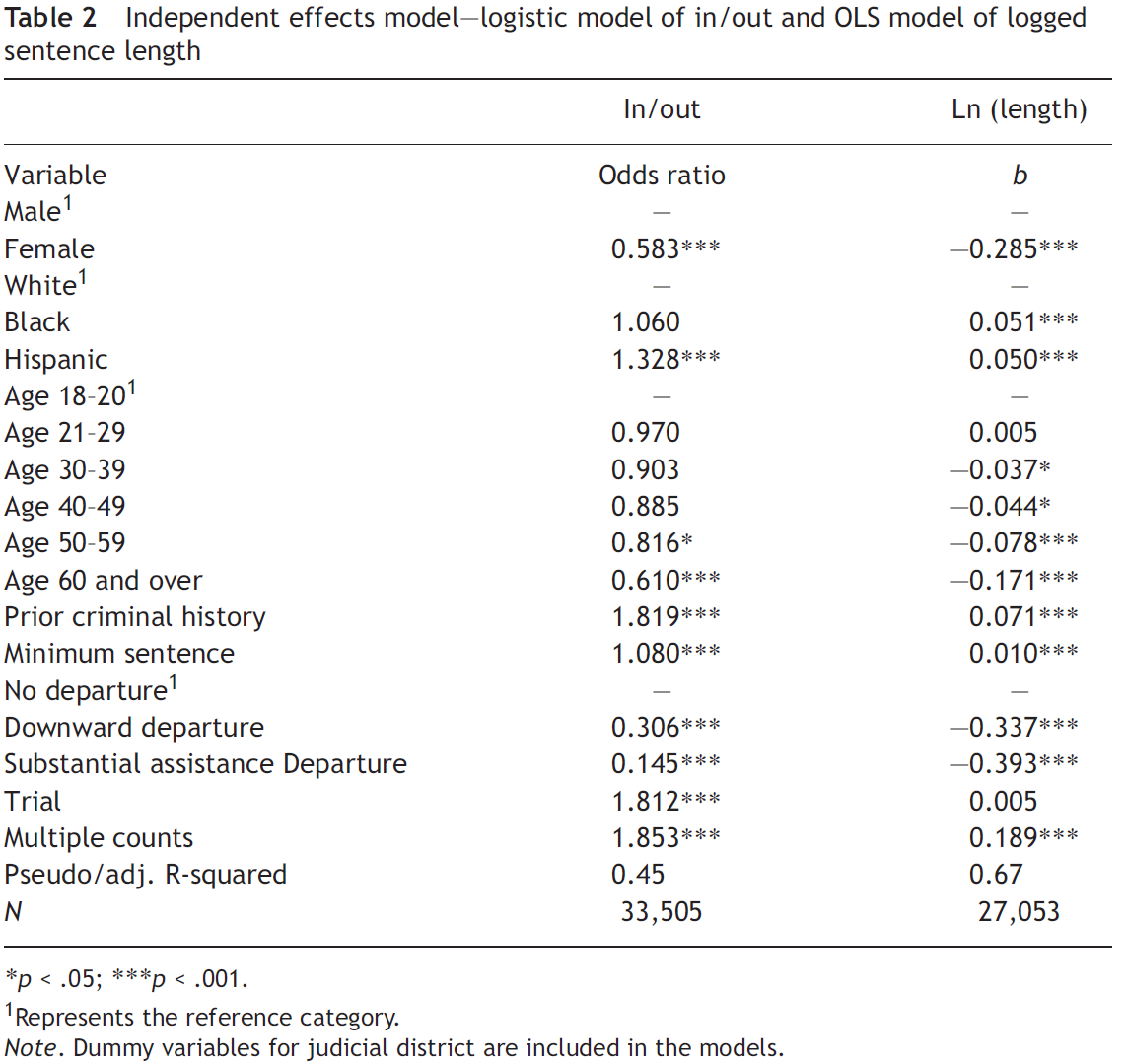 While men are treated more harshly than women by criminal courts, this is not necessarily proof of bias. The authors state:

we may be lacking relevant information that, if included in our models, would explain the racial/ ethnic, gender, and age disparities in our models. For example, women may be sentenced more leniently than men because they are, on average, more remorseful than men. If we have not adequately controlled for these gender differences in remorse in our models, then any apparent gender disparity may not be “real.”

Yes, the evidence is overwhelming that the criminal justice system is biased against men. The best study is by Sonja Starr, "Estimating Gender Disparities in Federal Criminal Cases," published in 2014 in the American Law and Economics Review. The site acrosswalls.org has a more general review of sex bias against men in criminal sentencing. These studies don't go into the deeper issue of bias against men in the definition of what's a crime.

Not the answer you're looking for? Browse other questions tagged gender law-enforcement .

26
Do women talk more than men?
35
Do women statistically have better multitasking ability than men?
16
Do women do more housework than men?
23
Do women prefer taller men?
45
Are men smarter than women?
5
Has it only been about two hundred years since women gained access to literacy?
12
Do women take more sick days than men?
40
Is it against the law to mispronounce Arkansas?
16
Are Asian women better at maths when they think they're competing against European men?