Does listening to complaints damage your neurons?

I read this old news today as it's gone viral in Italy:

That pain you feel listening to complainers? It's real enough to peel away neurons from your brain and render it pretty much useless, reports Inc. "The brain works more like a muscle than we thought," says Trevor Blake, an entrepreneur who wrote Three Simple Steps: A Map to Success in Business and Life. "So if you're pinned in a corner for too long listening to someone being negative, you're more likely to behave that way as well."

Research shows that exposure to 30 minutes or more of negativity--including viewing such material on TV--actually peels away neurons in the brain's hippocampus. "That's the part of your brain you need for problem solving," he says. "Basically, it turns your brain to mush."

Is this just a guy trying to sell his book or is there hard science behind his claims?

The book cited makes a similar, but not as-strong, claim based on a scientific article which does not support it

Both articles cite a book by Trevor Blake, Three Simple Steps: A Map to Success in Business and Life. I've looked up the chapter in question and here is what it says: 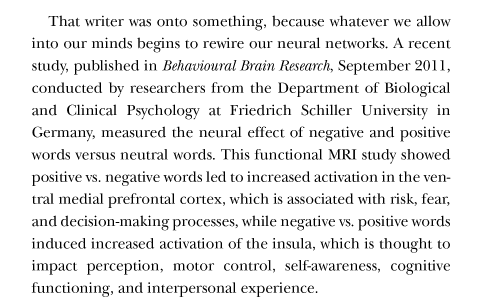 I've tracked down (I believe) the original article. It does not support the claims of the author! The article is about the discovery that the meaning of words influences which parts of the brain are activated. It says nothing about negative words being detrimental, let alone peeling away neurons.

This is the part of the book about stressors and brain damage:

The effects of fear are important to understand if you want to get out of the quicksand. As soon as you feel fear, the amygdala (a small almond-shaped organ in the center of your brain) sends signals to your autonomic nervous system, which then has a wide range of effects. Your heart rate increases, your blood pressure goes up, your breathing gets quicker, and stress hormones such as adrenaline and cortisol are released.

Robert Sapolsky, a Professor of neuroendocrinology at Stanford University, has focused his research on issues of stress and neural degeneration. He has won many honors for his papers that show links between long-term stressful life experiences, long-term exposure to hormones such as cortisol produced during stress, and shrinking of the hippocampus area of the brain.

The hippocampus is a mass of neurons each with multiple branch-like extensions (dendrites and axons), which make connections (synapses) with other neurons all across the brain. The hippocampus is also one of the few regions of the brain known to be able to produce new neurons, a process called neurogenesis.

Professor Sapolsky has shown that enduring a high stressor for more than 30 minutes negatively impacts the hippocampus in various ways. To begin, sustained exposure to higher than normal levels of cortisol results in the pruning back of the number of branches and synaptic connections of hippocampal neurons. By a variety of mechanisms, these conditions also increase the rate of cell death in this region of the brain.

As if this wasn’t bad enough, recent research is also demonstrating that sustained increases in glucocorticoid levels also has negative effects, impairing the hippocampus’s ability to create new neurons. Over a period of time, all of this results in the shrinking in size of the hippocampus with associated declines in cognitive function, including the ability to retain new information and adapt to new situations, which is exactly what you don’t want when you are attempting to reinvent your life.

The challenge we face with regard to the news media is that the brain does not distinguish between that which is real and that which is imagined. Watching a scene of carnage in a warzone causes some of the same detrimental effects as if we were actually there ourselves. The fear response we have in front of the TV is the same we would have in the real situation. Of course, it is diluted somewhat by the safety net of our home, but people addicted to the news are subjecting themselves to chronic stress every time they tune in. Day after day they take their dose of news and induce a cascade of destruction in their neurons.

Fortunately, according to Sapolsky, the negative effects of excessive stress can not only be stopped but also reversed “once the source, psychological or physical, is removed or sufficiently reduced.” Simple! Change a little, change a lot.

--Three Simple Steps: A Map to Success in Business and Life

Not the answer you're looking for? Browse other questions tagged neurology cognitive-science .

10
Can your thoughts be read through monitoring brain waves?
15
Can headbanging cause brain damage?
7
Did Akakhievitch open up the patient's brain and, one by one, ablate several thousand neurons, each of which related to the concept of his mother?
25
Does Lumosity increase your intelligence?
5
Do antidepressants cause brain damage?
7
Does listening to classical music "Improve Cognitive Function"?
3
Does looking at screens damage your brain?