Is the "Reader voices strong opinion on atheists" letter a hoax?

I've seen on Facebook the following image being shared: 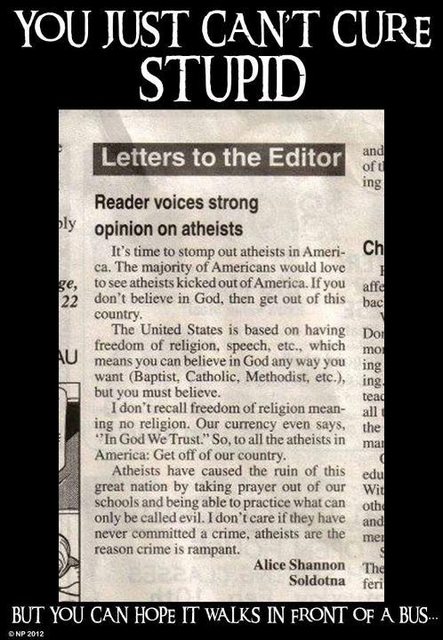 Letters to the Editor

It's time to stomp out atheists in America. The majority of Americans would love to see atheists kicked out of America. If you don't believe in God, then get out of this country.

The United States is based on having freedom of religion, speech, etc., which means you can believe in God any way you want (Baptist, Catholic, Methodist, etc.), but you must believe.

I don't recall freedom of religion meaning no religion. Our currency even says, "In God We Trust." So, to all the atheists in America: Get off of our country.

Atheists have caused the ruin of this great nation by taking prayer out of our schools and being able to practice what can only be called evil. I don't care if they have never committed a crime, atheists are the reason crime is rampant

Snopes has investigated this exact issue.

They conclude it was printed January 29, 2007 in an Alaskan newspaper, Peninsula Clarion.

However, the editors were contacted by the putative author who claimed it was a hoax.

“While I’ve been thoroughly entertained by the overwhelming number of passionate responses to my January 29th letter, it should probably be noted that, as at least one writer speculated, it was a complete joke. I think it has run its course and at this time space in the Letters to the Editor section should be reserved for more important issues.”

The newspaper published their side of the story in an editorial on March 9, 2007.

Another reader claims the letter was lifted from a South Carolinan blog, but the editors did not provide a link.

36
Do atheists have a better knowledge of religion than theists in the United States?
24
Is atheism the fastest growing "religion" in the history of the United States?
156
Did Donald Trump say that "global warming was a hoax invented by the Chinese"?
21
Are these reports alleging the existence of blackmail material by the Russian intelligence on Donald Trump a hoax perpetuated by 4chan?
1
Did Emma Willard send a letter to the French government appealing for women’s suffrage in 1848?