Did Newton discover that white light consists of various rays of coloured light?

Before Isaac Newton, it was believed that white light was colorless, and that the prism itself produced the color. Newton's experiments demonstrated that all the colors already existed in the light in a heterogeneous fashion

Whereas in an article titled "Muslim scientists and their inventions - An untold history of science", by Syed Samsul Alam, the following story was cited.

In 1000 CE, Al-Haytham discovered that white light consists of various rays of coloured light. In the late 13 th and early 14 th centuries, Qutb al-Din al-Shirazi (1236-1311 CE) and his student Kamal al-Din al-Farisi (1260- 1320 CE) continued the work of Ibn al- Haytham, and they were the first to give the correct explanations for the phenomenon of rainbow. Al-Farisi published his findings in his Kitab Tanqih al-Manazir [The Revision of (Ibn al-Haytham’s ) Optics]. Newton did make original discoveries, but this was not one of them.

So far as we know from their writings, both knew that coloured light could be produced from white light. Both wrote books which discussed, for example rainbows.

Al-Haythem certainly lived earlier (965-1030) than Newton (1642-1727) so Al-Haytham understood and wrote about many principles of optics before Newton was born.

However it seems that Al-Haytham didn't have a complete explanation, consistent with our current understanding of how the colours of a rainbow are produced.

In The Rainbow Bridge Rainbows in Art, Myth, and Science Raymond L. Lee, Jr writes of the considerable achievements of Alhazen (Al-Haytham) but suggests some aspects that he was unable to complete. 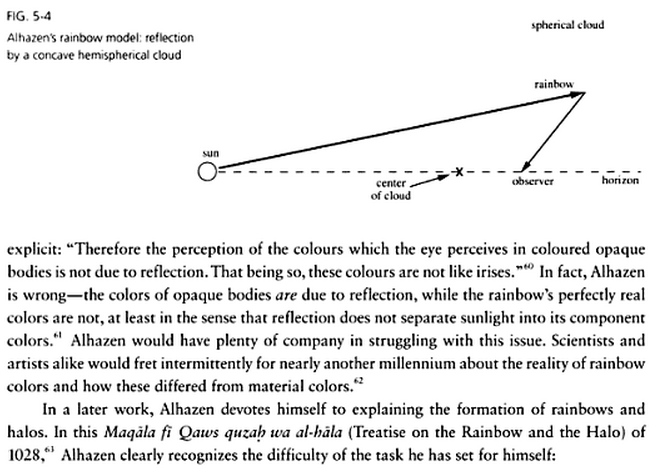 Known in europe as alhazen, this eminent mathematician, astronomer and physicist, who came to the fore with a new optics arrived at by systematic experiments, developed his own meteorological−optical explanation for the phenomenon of the rainbow in his treatises on the circular burning glasses and on the rainbow and the halo. although with his explanation of the origin of the rainbow through reflection on a concave spherical cloud, Ibn al−Haitam did not understand the true state of affairs, nevertheless, he laid a solid foundation for further experiments which, after about 20 years, led to a revolutionary breakthrough. It was Kamaladdin Abu l−Hasan Muhammad b. al−Hasan al−Farisi (d. 718/1318), a versatile natural scientist, who declared the explanation of the preceding scholars about the origin of the rainbow through simple reflection of light on drops of water to be incorrect.

A step that Newton took, which (so far as I know) Al-Haytham did not was

Newton set up a prism near his window, and projected a beautiful spectrum 22 feet onto the far wall. Further, to prove that the prism was not coloring the light, he refracted the light back together.

Newton and the Color Spectrum

[Newton] gave a detailed explanation of his discoveries in public lectures between 1669 and 1671 (published in 1728 as Lectiones Opticae) and in a paper to the Royal Society in 1672. In 1675, he presented another paper which described further experiments on the colour of thin films and plates, and which put forward a corpuscular theory of light which was surprisingly similar to the modern theory of light quanta. Newton’s Opticks, first published in 1704, went through many editions and was the most influential work on experimental science for almost all of the century. Amongst other things, it explained how raindrops refract sunlight to form rainbows. This was the first chromatic explanation of a phenomenon that had fascinated scientific writers, including Aristotle, Alhazen, Vitello and Antonio de Dominis, since the account of Noah’s Ark was first written down.

Newton and the Colour of Light

From the works he published and from the references to him by later scholars and scientists it is evident that Al-Haytham was a fine scholar and scientist. There is no need to attribute to him discoveries that he did not make.

Newton famously said "If I have seen further it is by standing on the shoulders of giants."

4
Did James Lovelock deny that CFCs destroyed ozone?
1
Did such a medical device ever exist that blew air into the anus?
22
Did the Center for Naval Analysis recommend that the damaged areas be reinforced on all bombers, creating a famous case of survivorship bias?
12
Did Isaac Newton give lectures to empty rooms while he was a professor at Cambridge?
11
Did William T. Thompson design a flag with explicit white supremacist symbolism, which was adopted by the US Confederacy?
9
Did Thomas Jefferson predict that slavery would split the US?
20
Were there no “white” people in Virginia between 1619 and 1679?