The Green Vision blog made the claim that fluoride doesn't prevent cavities. Here is a quote from the article:

The topical application of fluoride is a proven method for protecting teeth from cavities and decay. But there is no scientific evidence that adding industrial grade fluoride to public water supplies is effective, In fact, the opposite may be true.

I am interested in whether there is scientific evidence that supports the idea that fluoride when drunk rather than when used as tooth paste, helps to prevent cavities.

This answer originally consisted of one study based in the USA. This was revealed to be insufficient by a significant edit to @Skeptic's answer, which contained eight similar studies from different regions, drawing different results.

In such situations, where there are conflicting studies, there is a risk of cherry-picking. (In my case, the study was found by working backwards from the WHO report on fluoridation.) It becomes important to look not at individual studies or even who can produce the most studies, but at a systematic review of all of the studies, based on their quality and statistical power. Below, I repeat the original study I quoted, for completeness. Then, I look at a more powerful meta-analysis of the data.

This study looked at the results of two large epidemiological surveys:

DMFS (Decayed/Missing/Filled Surface) is a measure of tooth-decay used in dentistry. They found that children who grew up in fluoridated areas had 18% lower DMFS scores than those who never lived in fluoridated areas. If you removed the impact of other sources of fluoride, this jumped to 25%.

The decline in dental caries in US schoolchildren, first observed nationwide in 1979-1980, was confirmed further by a second national epidemiological survey completed in 1987. Mean DMFS scores in persons aged 5-17 years had decreased about 36% during the interval, and, in 1987, approximately 50% of children were caries-free in the permanent dentition. Children who had always been exposed to community water fluoridation had mean DMFS scores about 18% lower than those who had never lived in fluoridated communities. When some of the "background" effect of topical fluoride was controlled, this difference increased to 25%. The results suggest that water fluoridation has played a dominant role in the decline in caries and must continue to be a major prevention methodology.

Again the above study should be treated with care, as there are conflicting studies. Instead, we should look at the preponderance of evidence with a meta-analysis:

In this systematic review, a total of 214 studies were incorporated.

Each of the studies was considered "low to moderate" quality, so the existence of conflicting results is not too surprising.

Of those 214, 26 were related to the key question here - water fluoridation and dental caries.

They found that fluoride helps with caries:

Water fluoridation was associated with an increased proportion of children without caries and a reduction in the number of teeth affected by caries. The range (median) of mean differences in the proportion of children without caries was -5.0% to 64% (14.6%). The range (median) of mean change in decayed, missing, and filled primary/permanent teeth was 0.5 to 4.4 (2.25) teeth.

One of the figures gives a visual representation of the variance in the results: 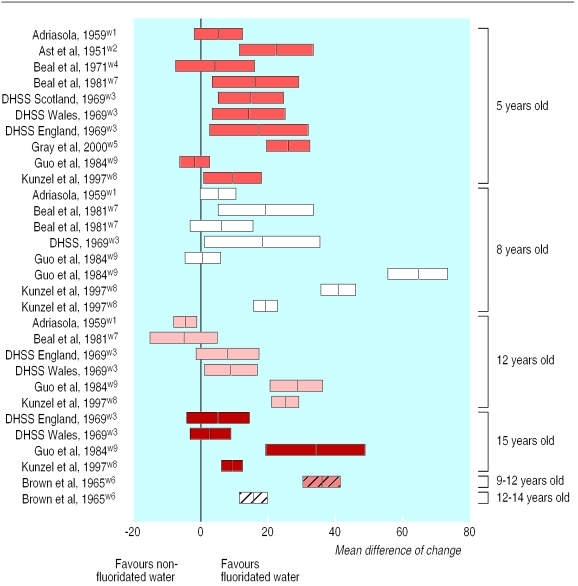 They also found there were the expected minor side-effects - fluorosis:

A dose-dependent increase in dental fluorosis was found. At a fluoride level of 1 ppm an estimated 12.5% (95% confidence interval 7.0% to 21.5%) of exposed people would have fluorosis that they would find aesthetically concerning.

I have included three more studies which are of related interest:

The existing body of evidence strongly suggests that water fluoridation is beneficial at reducing dental caries. After adjustment for potential confounding variables, McDonagh et al (2000a) showed in their systematic review that the introduction of water fluoridation into an area significantly increased the proportion of caries-free children, and decreased mean dmft/DMFT scores compared with areas which were non-fluoridated over the same time period. The findings of McDonagh et al (2000a) also suggest that cessation of fluoridation resulting in a narrowing of the difference in caries prevalence between the fluoridated and non-fluoridated populations. Only one additional relevant original study was identified in the current review and this did not change the conclusion of the existing systematic review.

(This also addresses an earlier discussion point that I didn't know what dose of fluoride I had swallowed today, by showing the model used to calculate it when determining the appropriate fluoridation levels in my country.)

The following studies from different regions suggest that fluoridation does not reduce dental caries:

There was no increase in caries when water fluoridation ended in Kupio, Finland during the following three years.

The city of Kuopio in central Finland had fluoridated piped water for 33 years, beginning in 1959. Due to strong opposition by various civic groups, water fluoridation was stopped at the end of 1992. Changes in the mean dmfs values between 1992 and 1995 in Kuopio were compared to those in Jyväskylä, a low-fluoride community that has repeatedly been used as the reference area for Kuopio. In all age groups both in 1992 and 1995, the point estimates for mean dmfs values were lower in the non-fluoridated town. In both towns, the observed mean dmfs values were smaller in 1995 than in 1992. Despite discontinuation of water fluoridation, no increase of caries frequency in primary teeth was observed in Kuopio within a three-year period.

In the past, caries has usually increased after cessation of water fluoridation. More recently an opposite trend could be observed: following the cessation of drinking water fluoridation, in contrast to an expected rise in caries prevalence, DMFT and DMFS values remained at a low level for 6-9-year-olds and to decrease for 10/11-year-olds. In the 12/13-year-olds, there was a significant decrease.

In contrast to the anticipated increase in dental caries following the cessation of water fluoridation in the cities Chemnitz and Plauen, a significant fall in caries prevalence was observed. This corresponded to the national caries decline and appears to be a new population-wide phenomenon. There is still no explanation for the pattern.

There was no statistically significant difference between DMFT in municipalities of the same size, regardless of the presence or absence of fluoride in the water supply... Prevalence of caries in the region was 'high', with a DMFT of 4.82, thus failing to reach the goals set for the year 2000.

955 students aged 15-19 years randomly selected from eleven secondary schools in Ibadan metropolis were examined for dental caries. The fluoride level of the different water sources was between 0.02 and 0.03 ppm. [only] Forty-four (4.6%) of the children had dental caries. In conclusion, both the fluoride level and caries prevalence were low.

It was concluded that while the break had little effect on caries, dental fluorosis is sensitive to even small changes in fluoride exposure from drinking water, and this sensitivity is greater at 1 to 3 years of age than at 4 or 5 years."

The following paper also conclude from existing data that there is negligible evidence for fluoride helping with dental caries.

A review of recent scientific literature reveals a consistent pattern of evidence-- hip fractures, skeletal fluorosis, the effect of fluoride on bone structure, fluoride levels in bones and osteosarcomas-- pointing to the existence of causal mechanisms by which fluoride damages bones. In addition, there is evidence, accepted by some eminent dental researchers... that there is negligible benefit from ingesting fluoride...

The following papers explain that some caries are due to high lead levels and fluoride doesn't help in these cases.

"Enamel biopsies taken from school children in a community where exposure to lead was a health hazard were analyzed for lead and fluoride. The children with high enamel lead had significantly higher caries scores than the children with low enamel lead, in spite of the fact that the high lead group also was higher in enamel fluoride. There was no increase in enamel lead with age. The lead in saliva was only a fraction of that in blood. Infants with lead poisoning showed higher saliva lead than a normal infant."

The fluoride in their teeth did not prevent the caries.

Lead is passed on from mother to child. The child doesn't necessarily have to ingest the lead. It can be transferred by the mother to her offspring, just like fluoride.

This study suggests that the fluoridation of water can lead to higher lead levels:

Chronic, low-level dosage of silicofluoride (SiF) has never been adequately tested for health effects in humans. We report here on a statistical study of 151,225 venous blood lead (VBL) tests taken from children ages 0-6 inclusive, living in 105 communities of populations from 15,000 to 75,000. For every age/race group, there was a consistently significant association of SiF treated community water and elevated blood lead. The highest likelihood of children having VBL> 10 microg/dL occurs when they are exposed to SiF treated water and subject to another risk factor known to be associated with high blood lead (e.g., old housing).

Not the answer you're looking for? Browse other questions tagged dentistry fluoride .

3
Does fluoridated water increase the risk of fractures amongst osteoporosis patients?

9
Does vitamin D prevent cavities better than fluoride?
16
Does consuming fluoridated water reduce IQ?
29
Did the Nazis maliciously fluoridate drinking water?
27
Can teeth cavities be cured through diet?
11
Has cessation of water fluoridation lead to a 90-200% increase in cavities in children?
13
Does using a fluoride-based toothpaste or fluoride-supplemented tap water lead to higher fluoride concentration in the pineal gland?
16
Is coconut oil effective as a toothpaste or in promoting oral health?
11
Does Xylitol Need be Ingested to Reduce Tooth Decay?