Is poker more a game of skill than chance?

I just read a NY Times article which claims that a US Judge ruled that poker is a game of skill and not one of chance.

In a ruling that goes to the heart of what it means to play poker, Judge Jack B. Weinstein tossed out the conviction and vacated the indictment of the man who ran that gambling business. The judge’s reason: poker is more a game of skill than a game of chance, so game operators should not be prosecuted under the federal law the prohibits running an illegal gambling business.

Is there any evidence to support that poker is a game of skill and not luck?

In tournament play, which is not a particularly long trial, there seems to be evidence that skill plays an important role:

Examining the performance in the 2010 World Series of Poker group of poker players identified as being highly skilled prior to the start of the events. Those players identified a priori as being highly skilled achieved an average return on investment of over 30 percent, compared to a -15 percent for all other players. This large gap in returns is strong evidence in support of the idea that poker is a game of skill.

The Role of Skill versus Luck in Poker: Evidence from the World Series of Poker, Levitt & Miles, 2011.

I don't know that it's valid to claim that the influence of skill is more than that of chance but it's interesting to note that the ROI magnitude for "highly skilled" players (30%) is greater than the magnitude (15%) of others.

In table play, I cannot find a reference to something I recall, which is that skill only begins to statistically dominate after several thousand hands (~2000-3000 IIRC). I believe that is only relevant to "correct" play based on pot odds and ignores psychological aspects, betting and bluffing strategies, etc.

There is no doubt there is an element of chance involved in Poker. (Extreme example: If you are dealt a Royal Flush, you cannot lose.)

I am taking the question to mean "Is there ANY skill involved in Poker?".

I have to admit I find the answer to be blindingly obvious.

To give an extreme example, if a player had a sub-optimal strategy of betting 80% of their bank on every hand, no matter what its strength, would be quickly defeated by a moderately skilled competitor who merely folded when their cards were below the median strength.

Nonetheless, it has been studied:

They looked at a somewhat tighter question - could simple instruction improve the expected outcome of some non-expert players?

The unequivocal finding is that poker is a game of skill. In both studies, participants who were instructed outperformed those who were not instructed. Given that poker is a complex skill, it is somewhat surprising that even elementary instructions and limited practice had an effect.

The reason that poker appears to be a game of luck is that the reliability of any short session is low. In a casino game of poker, about 25 hands are dealt per hour. In Study 2, participants played 720 hands equivalent to about 30 hours of casino play. Study 2 met the psychometric qualification for moderate reliability of a psychometric task. What this suggests is that obtaining accurate estimates of poker ability may not be easy. Luck (random factors) disguises the fact that poker is a game of skill. However, as these studies show, skill is the determining factor in long-term outcome.

I think the "more" part of the (title) question is difficult to answer. You need a metric for "more".

Several papers have used the metric proposed in "On a relative measure of skill for games with chance elements": a scale of 0 to 1 for the skill element, calculated as

For a single-player game, this comes down to:

where the G's are the expected net gains of three players

Unfortunately, this metric is difficult to calculate for more interesting games, like any full-fledged poker variant. Several papers have calculated this skill value for simplified versions of poker.

The papers emphasise however that the exact skill value depends on the definition/assumption of beginners’ behavior.

Another way to tackle this problem is experimentally as in the accepted answer, but do note that the NBER paper discussed there is using a proxies for skill past winning and measures derived from that (like rankings), so it is measuring more of an autocorrelation (past winnings predicting present ones). What's more important (see figure 1 in that paper) is that the cash structure of the tournament is highly convex, so won 30% more money doesn't really mean would win 30% more games.

So, a slightly older paper has results I think are worth mentioning.

"Quantifying Skill in Games—Theory and Empirical Evidence for Poker" analyzed two on-line Poker sites' data and came up with this summary:

The median winrate in that table is an absolute value and expressed in BBs (big blinds) adjusted for rake, so that the numbers are comparable across different-BB (stake) groups. The sigma is the standard deviation of that winrate with the odd twist that they say the could not compute it except for the last group, so that's why the entire column has the same value. The two CRFs are calculated simply as 4sigma/winrate^2 and respectively 9sigma/winrate^2. The theoretical interpretation of the CRF is the number of games it would take for a player to reach his 50%/50% chance-vs-skill cut-off point, illustrated below 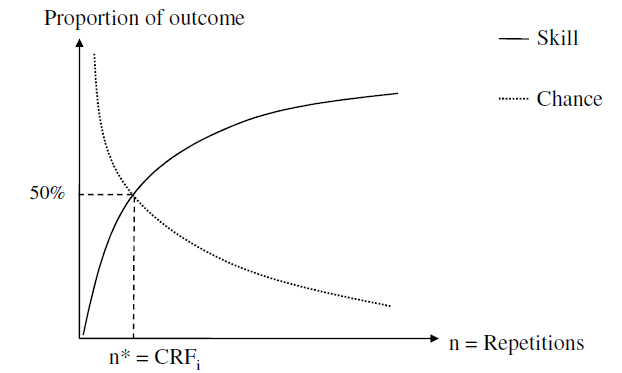 From the table, it's obvious that whom one is playing against makes a big difference in winrate and thus CRF. Absolute winrate goes down pretty fast (and CRF goes up) with the experience group because the big losers go away quickly. So rather than having a theoretical discussion as to the beginner's behavior, now one has to decide how clueless of a player one allows into the sample. The authors note that playing 1,000 hands may seem like a big number, but can be reached in 13 hours of online play (and about 33 hours in a brick-and-mortar casino).

The supreme court of Sweden decided that poker (texas holdem) is a game of both skill and chance.

The court decided that while the game is a game mostly of chance in a tournament form it is a game of skill.

More than most card games, poker is a game of psychology and reading other people.

There is an element of chance to each individual hand, but the game isn't just one hand, it's a whole series. The winner isn't the person who won the most hands, but the one who wins the most money.

The best players learn to read cues from their opponents, to gauge just how strongly that person feels about their hand. Maybe how they hold their cards, their posture, nervous gestures, maybe just their eyes... do they have a strong hand, or are they bluffing? How strongly do you raise when you have a good hand? Enough to up the ante, but not so much you scare off the other players. You want to win the hand after they've matched your raises, not after they folded. And, how do they meet your raises? Hesitantly, or confidently and topping your raise? And... are they bluffing with that confident response, or are they holding aces over kings, and just luring you in? It will cost you the next raise, to find out.

There is definitely skill, and possibly even a bit of innate ability involved in being a top poker player. The best ones know when to meet a challenge, and when to fold, by reading their opponents.

Not the answer you're looking for? Browse other questions tagged mathematics gambling .

11
Are there more 40-moves chess games than atoms in the universe?
21
Are people who win the lottery more likely to go bankrupt?
7
Is Internet gambling more harmful than regular gambling?
26
Are the chances of dying on the way to get lottery tickets larger than the chance of winning?
14
Did this US judge rule that poker is a game of skill and not chance?
16
Was Shakuntala Devi able to perform complex computations far faster than the best living human calculators?
26
Did A&W customers think 1/3 pound burger patties weigh less than 1/4 pound ones?
41
Are you more likely to be struck by lightning than to win the lottery?
104
Can you predict a number that is “randomly” chosen by a person better than chance?
3
Does Heads Up Texas Hold'em have more possible hands than atoms in the universe?