Are carrots orange because the Dutch loved orange?

On the web, I find several unsourced claims that carrots are orange because the Dutch loved the colour. For example:

Allegedly they are orange for entirely political reasons: in the 17th century, Dutch growers are thought to have cultivated orange carrots as a tribute to William of Orange – who led the the struggle for Dutch independence – and the color stuck. A thousand years of yellow, white and purple carrot history, was wiped out in a generation.

On the other hand, the carrot museum writes that it's probably apocryphical, but doesn't provide any sources either:

The modern orange carrot was developed and stabilised by Dutch growers in the 16-17th century, evidenced from variety names and contemporary art works. (Art pages start here). A tale, probably apocryphal, has it that the orange carrot was bred in the Netherlands in the seventeenth century to honour William of Orange. Though the orange carrot does date from the Netherlands in the sixteenth century, it is unlikely that honouring William of Orange had anything to do with it! Some astute historian managed to install the myth that the arboriculturists work on an unexpected mutation was developed especially to give thanks to King William I as a tribute to him leading the Dutch revolt against the Spanish to gain independence from Spain. There is no documentary evidence for this story!

Wikipedia only mentions that Orange-coloured carrots appeared in the Netherlands in the 17th century, but does not provide any reason. And this Washington Post blog post doesn't seem to have more research than me either, because it links the same two websites among the google top-5 that I'm doing above. 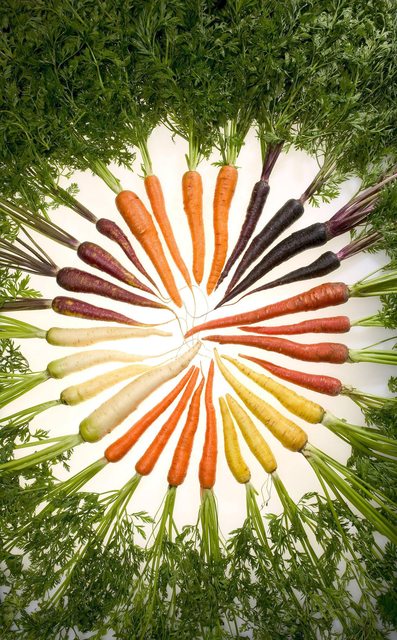 Are carrots orange for political reasons?

I am not sure if the Dutch preferred orange carrots, but carrots in different colours, including orange, were obviously common much longer ago than the 16th or 17th century. This drawing from the "Vienna Dioscurides" dates back to appr. 515 CE and shows an orange carrot (source. Wikipedia): 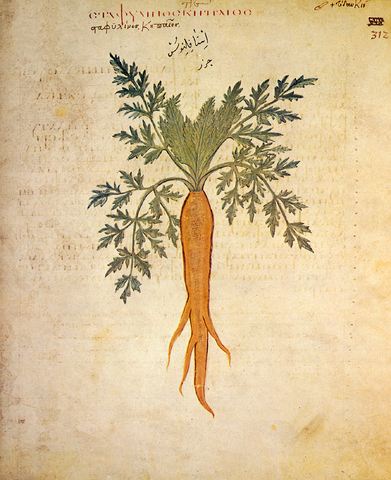 Not the answer you're looking for? Browse other questions tagged nutrition politics .

18
Is poisoning possible from preservative on orange zest?
39
Does eating carrots improve your eyesight?
12
Does drinking milk and orange juice together cause digestion problems?
24
Are people dying of starvation because we cannot produce enough food?
11
Should we prefer organic lemon and orange peels?
0
Did Jerry Rubin eat so many carrots he turned orange?
4
Does non alcoholic beer have roughly the same alcohol as orange juice or a ripe banana contain at .5% alcohol?
21
Did the myth of carrots improving eye sight begin as WWII propaganda?