Did Japanese people misspell "We pray for MacArthur's election"?

The Internet is full of references to the same story:

It was probably in 1946, when Gen. Douglas MacArthur was temporarily put in charge of running Japan, which was in tough shape after surrendering. He was such a decent overseer that many Japanese hoped that he could be voted into a position of power, possibly President of the USA. In one of Japan’s larger cities, they put up a banner across a principal street that said, something like “WE PRAY FOR MACARTHUR’S ERECTION”.

here, here, here and here, and there are many more on the Internet.

Did Japanese people write a sign saying "We pray [or play] for MacArthur's erection"?

I know that native speakers of Japanese mix up "r" and "l" even when writing or typing, but when I google about this quote, I get a lot of user-generated content, rather than reliable sources, which makes me suspect that it's apocryphal.

2018 update: Please see the other two answers for evidence that the photo attached below is of the sign being repainted. Newspaper sources don't directly attest to this, but there was widespread censorship at the time.

Although it has been spread far and wide that this occurred, and some even date it to Ginza in 1948, this is the actual sign that appeared in Ginza that year: 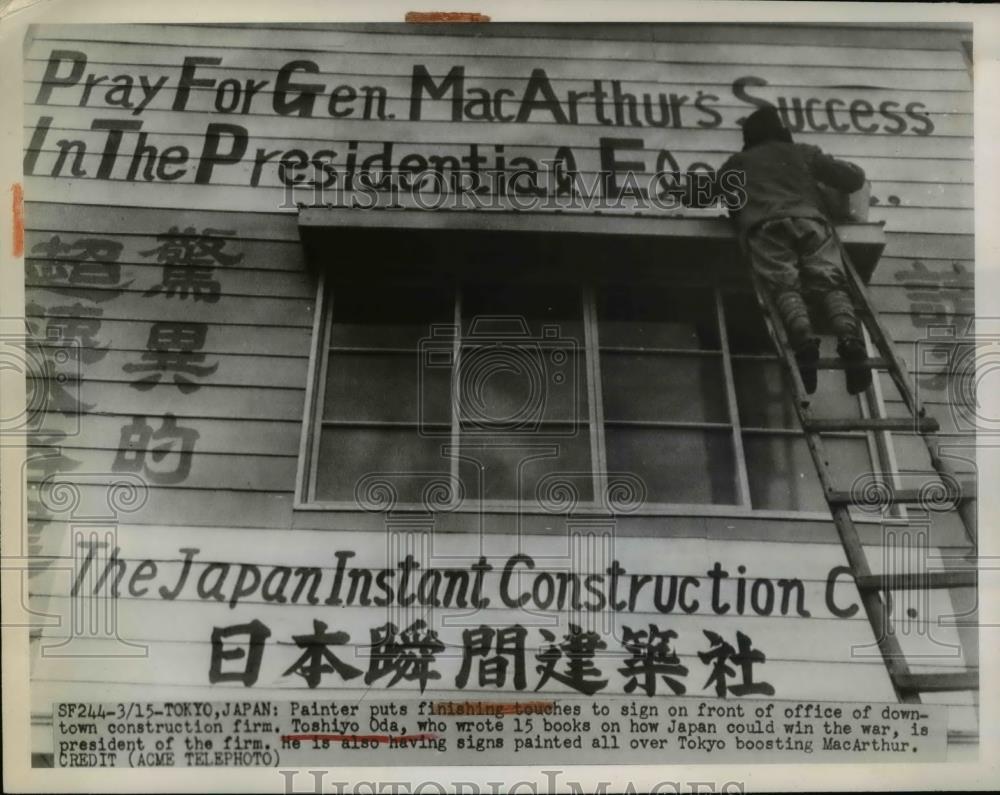 As you can see, there are no issues with the spelling, although print and cursive have been mixed. Perhaps someone saw the second cursive "L" and misread the message at first, then passed the chuckle along to their friends.

I Googled this to see if anyone had written about it in Japanese, and found the following: "When I saw the words 'Japan Instant Construction Company' written in Japanese I couldn't help laughing. On the left is written 'Marvelously Superfast Construction From Scratch'. Everyone likes to say that their company gets the job done fast, but 'instant construction' is a real accomplishment. Like instant ramen!"

While the accepted answer shows that one poster did not misspell election, there were other such posters. Even the caption refers to "signs painted all over Tokyo boosting MacArthur". There was even a different sign on another side of the same building.

According to Jack Seward's 1971 book: The Often Misunderstood, Sometimes Surprising, and Always Fascinating Culture and Lifestyles of Japan

A group of ardent Japanese supporters of the already aging general arranged to have a gigantic banner hoisted high over the busy Hibiya intersection in downtown Tokyo, just where MacArthur could see it when he emerged from his office in the Dai Ichi Building. Bearing in mind that the Japanese tend to confuse the "r" and the "l" in English, try to visualize these six-foot high letters emblazed on the banner: "WE PRAY FOR MACARTHUR'S ERECTION!"

So if the story isn't true it is at least traceable to Jack Sewards 1971 book.

For more on Jack Seward, see his obituary in the Tokyo Weekender

Jack Seward, a legendary authority on Japan and a U.S. military veteran, passed away on November 10, 2010 at the age of 86 in Houston, Texas from post-stroke complications. A man of great intelligence, Jack leaves behind a legacy of international accomplishment and service.

Born John Neil Seward Jr. in Houston on October 11, 1924, ‘Jack’ grew up in Dallas and upon graduating from Woodrow Wilson High School in 1941, started attending the University of Oklahoma. During this period, an act of chance introduced him to his life-long connection to Japan — while spending several summers with his father John Seward Sr. working on the Frank Phillips ranch in Bartlesville, Oklahoma, two Japanese co-workers started to teach him some Japanese language. At the age of 18, he volunteered for active duty in the U.S. Army, and upon discovering his knowledge of Japanese, the Army enrolled him in a special military intelligence training unit on Japan at the University of Michigan Ann Arbor where he graduated two years later second in his class.

Jack served under General Douglas MacArthur’s staff command during the occupation of Japan. This was the beginning of his 25 years spent living in Japan. After his tenure in the Army, he served in the U.S. Central Intelligence Agency as part of their Asian operations ...

In 1963, Jack married Aiko “Jean” Morimoto of Shikoku, and together had two sons. Over the course of these years, he built his reputation as a leading Japan expert and linguist, obtained a doctorate’s degree following post-graduate studies at the University of Hawaii, and also commenced pursuing his interest in writing books...

So Jack Steward was in the position to have personal knowledge of the misspelling event, and repeated this account in an 17 December 1982 article and multiple books, including an illustration in Strange But True Stories from Japan showing the misspelling on a banner streched across a street, which is inconsistent with the sign painted on the building.

Toshiyo Odo was the leader of the 1948 campaign in Japan for MacArthur, and as you can seen below his spelling skills where not the best: "PERSOUNELS", "lipps", "alied", "personuels", "personels", "humouraus", "personnels". If he could misspelll personnel four different ways in one sign, it is possible he could have misspelled "election" in another sign as Jack Seward has stated. 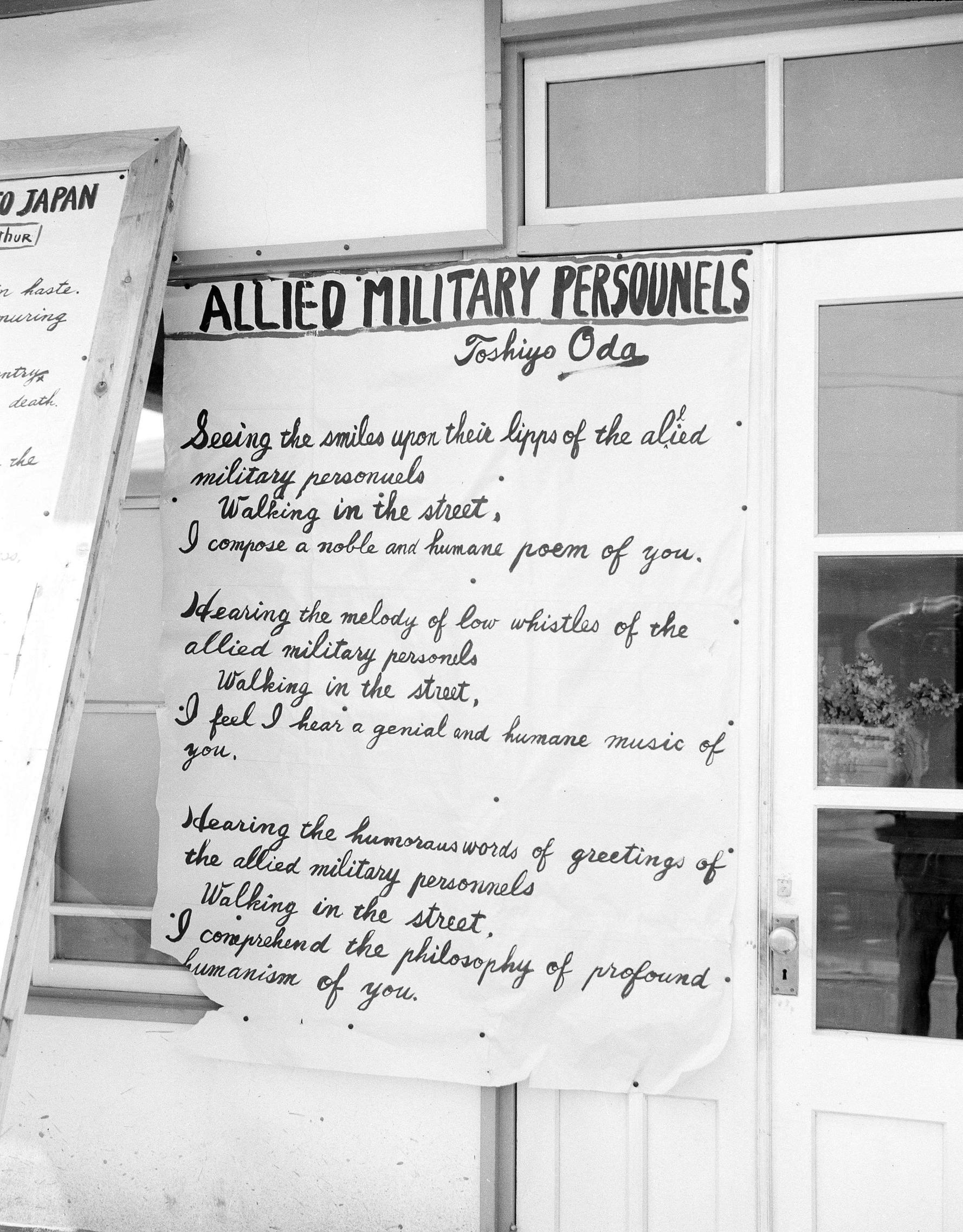 My uncle Bernard Frew joined MacArthur in Australia; he served as his secretary, landed holding the arm of the Philippian President, stood in the group behind the General on the Missouri, then changed to the State Department. He continued to serve as secretary for MacArthur and Chief of Protocol to the Emperor in the Administration after the war.

Bernard respected his oath not to speak about many of the inner office workings; only when my late wife questioned him would he speak of non-important happenings; He had a very sharp memory. I wrote a chapter on "Bernard Frew KCSG" in my memoir "A Pilot's Life."

This is a sub-chapter on the question at hand.

General MacArthur did not take over the military government in Tokyo as a conquering military man imposing his will on the people. He was very fair in his administration, helping the Japanese people recover, so they came to really love him. This love was demonstrated in one of what I think is Bernard's most humorous stories of Japan.

One morning, as Bernard describes it, General MacArthur came into the office roaring mad, angry at what he had seen on his way in. His comment was, or his order was, "I want you to send somebody out there and tear down that damn sign." Of course, everybody in the office had already heard about the sign so they knew exactly what he was talking about. This was at the time when there was some thought that General MacArthur planned to return to the United States to run for president. One, or some, Japanese had expressed their support for General MacArthur in a sign that they had displayed on a building or a structure. Bernard said that they couldn't tear down the sign because it was private property. MacArthur said, "I don't give a damn, I want that sign ripped down." The sign supporting MacArthur for president said: "The Japanese people hope and pray for General MacArthur's erection."

The next morning, one of the people in the office asked Bernard if he had sent somebody out to tear the sign down. Bernard answered him "Oh no, we couldn't do that because it was private property, we repainted it." Actually, I did see a picture of that sign with the repainted text while I was watching a documentary on MacArthur.*

I attach a picture of Bernard, (Near the car), following MacArthur and his group into his Administration Building. 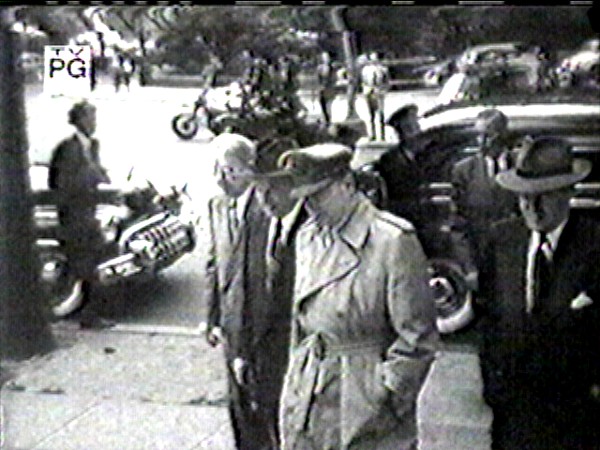 Not the answer you're looking for? Browse other questions tagged united-states quotes language japan .