Is the coldest part of the day an hour after the sun comes up?

Is there something more complex going on that causes the Earth to take longer to heat up, or is this claim false?

The theory is surprisingly simple.

The air and the ground get colder when no sun shines on them and hotter when the sun does. What we measure when we say it's colder is actually the air temperature. The sun's radiation has no effect on thermometers.

As you can see in the graph, minimum temperature occurs about 30 minutes to 1 hour after sunrise (hard to be exact with the ticks used).

For all dates, minimum temperature occurs at sunrise. Temperature drops throughout the night because of two processes. First, the Earth's radiation balance at the surface becomes negative after sunset. Thus, the surface of the Earth stops heating up as solar radiation is not being absorbed. Secondly, conduction and convection transport heat energy up into the atmosphere and the warm air that was at the surface is replaced by cooler air from above because of atmospheric mixing. Temperature begins rising as soon as the net radiation budget of the surface becomes positive. Temperature continues to rise from sunrise until sometime after solar noon. After this time, mixing of the Earth's surface by convection causes the surface to cool despite the positive addition of radiation and heat energy.
--source 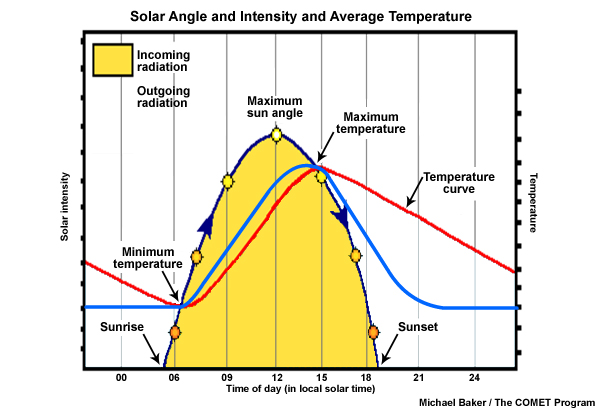 The above is a schematic of the typical diurnal cycle of surface temperature (red) and the net energy rate due to incoming solar (black) and outgoing longwave radiation (blue).

Why Does Cold Air Fall and Warm Air Rise? My weather station says yes, remember cold air falls and without the ground being warmed there is nothing to push the cold air away.

As I understand it, the suddenness you refer to is likely a combination of the steady decrease in air temperature until the ground has warmed enough to start heating the air instead of cooling it, as explained above, with wind chill associated with the air pushing eastward along the ground to replace air which has already been warmed, and is therefore lighter and rising.

Not the answer you're looking for? Browse other questions tagged weather meteorology .