Firstly, I think this is a stupid unbelievable question. However, for the sake of getting on S.SE, is there any evidence to for the Nazis using fluoride maliciously for example, to make prisoners more docile?"

Here is one graphic claiming, "Hitler used it to sterilize inmates nad make them more docile." 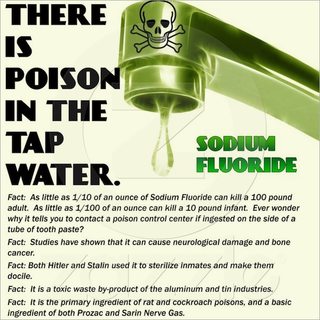 Infowars claims it in graphics too, "Sodium Fluoride, used by Nazis, lowers your IQ." 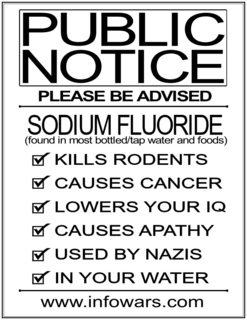 And, the InfoWars site says..

“the Nazi concentration camps used fluoridated water to suppress the will and vigor of inmates. This appears to have been during the 1930s and was the first known example of fluoridated water supplies for a specific population.”

Interestingly the site sources Richard Shames, M.D. graduated Harvard and University of Pennsylvania, however it doesn't say how he came to the conclusion. He also seems kind of sketchy as he offers "consultations by telephone." But, he does have a book that is well reviewed on Amazon.

Lastly, here is a article entitled, Nazi's used Sodium Fluoride with all kinds of claims. Most bold is probably,

"The first occurrence of fluoridated drinking water on Earth was found in Germany's Nazi prison camps. The Gestapo had little concern about fluoride's supposed effect on children's teeth; their alleged reason for mass-medicating water with sodium fluoride was to sterilize humans and force the people into their concentration camps into calm submission. (Ref. book: "The Crime and Punishment of I.G. Farben" by Joseph Borkin.)"

But the article continues, "The German chemists worked out a very ingenious and far-reaching plan of mass-control which was submitted to and adopted by the German General Staff. This plan as to control the population in any given area through mass medication of drinking water supplies. By this method they could control the population in whole areas, reduce population by water medication that would produce sterility in women, and so on. In this scheme of mass-control, sodium fluoride occupied a prominent place." Presumably the above excerpt continues, "repeated doses of infinitesimal amounts of fluoride will in time reduce an individual's power to resist domination by slowly poisoning and narcotizing a certain area of the brain, thus making him submissive to the will of those who wish to govern him." 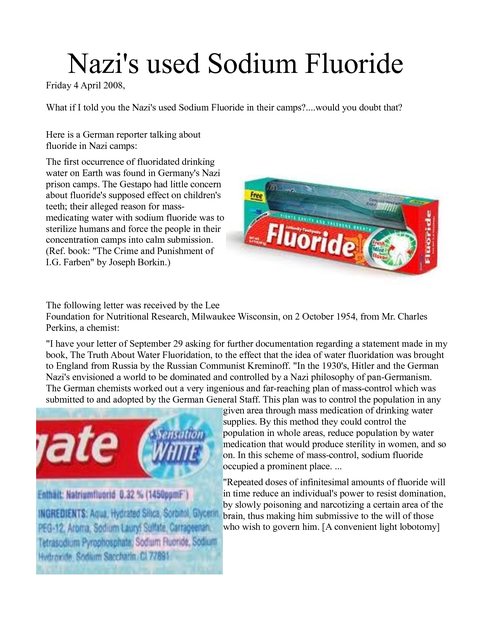 Politifact gave this old story about the Nazis and fluoride a "Pants On Fire" rating:

...We tracked down roots of these claims on the Web, reached out to Holocaust historians, contacted well-known critics of water fluoridation, and read book excerpts and magazine articles and news stories. And we can tell you: There's no teeth to this claim.

As a side note, here is a link to an Institute for Science in Medicine white paper on the movement that spreads propaganda like this Nazi myth:

Not the answer you're looking for? Browse other questions tagged water fluoride .

32
Is fluoride an ingredient in Prozac and rat poison?