Do Christmas celebrations have these diverse non-Christian origins?

This image from Truth Saves is a little tongue-in-cheek but it makes claims to the real origins of several modern Christmas related traditions such as the tree and carols. 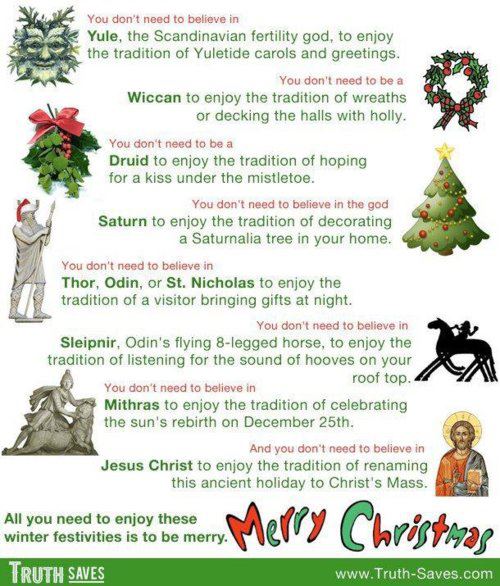 All you need to enjoy these winter festivities is to be merry.

Anyone have the skills to find out if they are all indeed the inarguable origins?

While some of these are false, the fact remains that people do not like to let go of old habits and traditions just because they have converted to a new religion or when abandoning religion all together. Most of the traditions we associated today with Christmas have some sort of origin in pre-Christian folk customs or religious traditions.

Not the answer you're looking for? Browse other questions tagged history religion jesus-christ christmas .

18
Which of these deities were believed to be born on Christmas?

18
Which of these deities were believed to be born on Christmas?
67
Have Islamic prayers been introduced into Ontario public schools while Christian ones have been removed?