Does Barack Obama have an aunt who was a homeless illegal alien that used government housing for 10 years?

Just found this one on Facebook. The people making the claim have 11k page likes (26th November 2012). 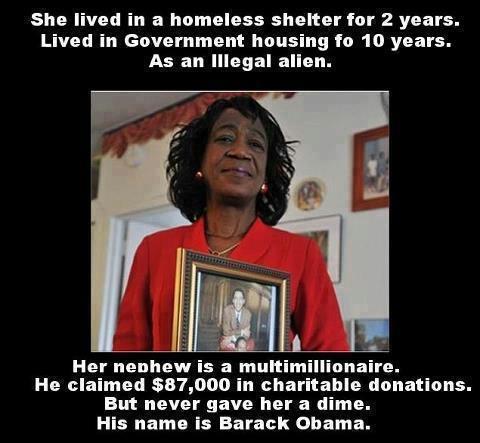 She lived in a homeless shelter for 2 years.
Lived in Government housing for 10 years.
As an illegal alien.
Her nephew is a multimillionaire.
He claimed $87,000 in charitable donations.
But never gave her a dime.
His name is Barack Obama.

19
Have six of the ten 9/11 commission members said that the US government was covering up something about the 9/11 attacks?
30
Does Barack Obama have an active quora profile?
86
Was President Trump's inauguration "the first time ... that floor coverings have been used to protect the grass on the Mall"?