The claim that sex cures headaches is commonly quoted. For example, from 10 Reasons Sex is Good For You:

10. Sex Can Cure Headaches
A South Illinois School Of Medicine study on 52 migraine sufferers reported that 16 experienced considerable relief after an orgasm and another eight had their headaches completely gone. No reason now to say, "Not tonight honey, I'm having a headache."

Sex = endorphins = pain killers.
Does sex just act as pain killer and cure headache's symptoms: pain, or there is some other substance released that cures the causes?

It's reported, but not conclusively demonstrated by experiment. Also, in some cases sex is known to cause migraine. I found absolutely no evidence for it being more than a temporary analgesic, let alone a cure. 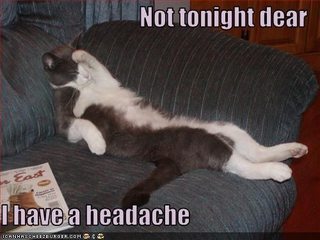 This is a well known ailment which affects about 1% of the population. There are three main kinds:

The best study I could find — and the most cited article in recent popular press — was published this March 2013 in the journal “Cephalalgia”: "The impact of sexual activity on idiopathic headaches: An observational study"

Our data suggest, however, that sexual activity can lead to partial or complete relief of headache in some migraine and a few cluster headache patients.

Honestly, I think this is a big stretch on their side as the study is simply a scientific survey. It does not control for double blind, for example, and does not distinguish between real physiological effects and placebo.

Totally aside, but funny, here's a much less suspicious conclusion from the same study:

The majority of patients with migraine or cluster headache do not have sexual activity during headache attacks.

Not the answer you're looking for? Browse other questions tagged neurology sexuality .