Was polo the first sport to be played on earth?

I was reading about Qutub Minar and came across the fact that its builder Qutb-ud-din Aibak died while playing polo. Upon reading more about polo itself, I realized it was around since 5th century BC or even earlier.

The game first played in Persia at dates given from the 5th century BC. or much earlier.

When I tried to cross reference whether it was indeed the oldest sport, answers from other community-oriented question & answer sites provide contradictory answers. Yahoo Answers mentions about wresting being the oldest sport with the source link currently unaccessible. Whereas Wiki Answers states boxing was the oldest sport. Neither of the answers seem convincing enough with valid substantiations.

A Wikipedia article about History of Sport loosely mentions about archery, javelin, swimming and wrestling happening earlier than 5th century BC but it is not clear whether these activities were to be considered as a sport.

So, was polo the first recognizable sport to be played on earth? Or are there any other sport which is older than the polo?

For the scope of the question, I am defining sport as "competitive physical activity" if I may borrow from the Wikipedia. Suffix to say, it has to be essentially between human beings. So, sprinting among humans count as sport while pie-chucking among chimpanzees don't.

Whether or not the sport was played under well defined rules and regulations does not matter either as long as the sport is considered competitive and physical but I guess we all would agree that there needs to be some guidelines on how a sport has to be played.

No. There are several sports that predate Polo, the most notable being various forms of wrestling.

As the Wikipedia article states Polo was first played around 5th century BC. The source, which I haven't been able to verify states

Its birth place was Asia and authorities credit Persia with having devised it about 2000 BC..

While Polo is a very old sport, it certainly isn't the first.

From Ancient Egypt and Sumer we have written and illustrated depictions of archery, boxing, wrestling, longjump and fishing all of which meet the modern definition of sport.

The Epic of Gilgamesh written in 2600 BC contains a scene where Gilgamesh engages in Belt Wrestling with Enkidu. There is a summary available here.

Earlier than that even, cave paintings dating back to 7000 BC in the Bayankhongor Province of Mongolia show two naked men grappling while surrounded by crowds. This is mentioned on several wiki pages, although I am so far unable to find a source 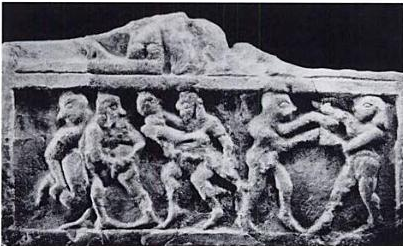 Wrestling seems to be the earliest sport recorded, based on the available archaeological evidence. While it may not be the first sport, it certainly predates Polo by at least 500 years.

Not the answer you're looking for? Browse other questions tagged history sport .

188
Did people think the Earth was flat?
31
Is playing sport at your 'home ground' a benefit?
10
Is there one (and only one) endurance sport in which women outperform men?
12
Did Marco Polo travel to China?
9
Does wearing red give an advantage in competitive sport?
11
Was Christian Europe the first place to abolish slavery?
21
Did the ballet/orchestral work 'The Rite of Spring' provoke a riot?
20
Did (former) German Minister Manfred Lahnstein admit that Germany wanted the EMS in order to get a competitive edge over other European countries?