Is the climber's head-lamp backstory for this long-exposure photo feasible?

I enjoyed reading the fascinating story of how a climber took an amazing long-exposure photo of his climb up, down and around a Peak District landmark.

I don't doubt that he has produced a beautiful picture, but there is some alarm bells ringing in my head wondering if the light streaks were really created by his head-lamp as he performed his arduous journey.

So I'd appreciate if you could take a sceptical look at this image: 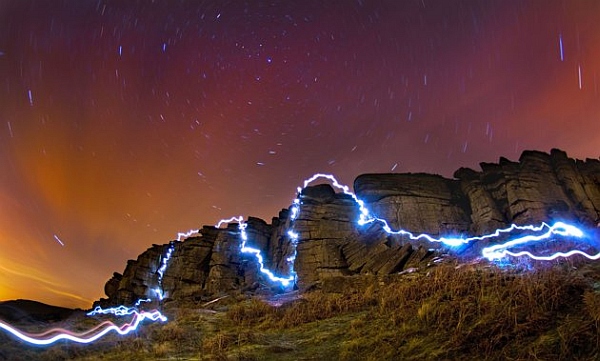 How long would it take to create an image of those stars that streak in that fashion and is it possible to travel the distance marked by the climber's headlamp in that time?

So are those lights the fleeting wisp of a hand torch, Photoshop or the climber's head lamp?

These pictures are ostensibly made by using a head-mounted light as well as a secondary light pointing toward the camera.

The photographer (Dan Arkle) has a number of similar photos on his website as well as a very detailed explanation of the technology and techniques used.

In addition, you can see an extensive "making of" documentary that was shown on BBC1's "The One Show" showing both the process by which these photos were made (including head-mounted camera footage) and the cameras used.

In several of the individual shots on the video you can distinctly make out a human form climbing along with the lights. 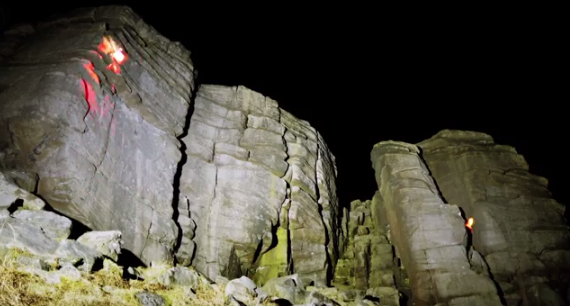 Whilst I agree that it would be perfectly possible to have faked all of the above, it stretches the bounds of credibility to imagine that that's the case.