Are more sunglasses sold in Seattle than in any other US city?

Seattlites and sunglasses enthusiasts proudly assert the claim, but I've found no comparative analysis to back it up.

Terry D. Seidler, a Seattle tour guide, makes the typical statement in a list of Seattle Firsts and attributes it to the P.E.O. Record:

Seattle sells more sunglasses per capita than any other major city in the nation.

The online archive of the P.E.O. Record goes back no further than December 2003, so it's difficult to know if the P.E.O. provides scientific support.

Darwin Liao, director of the Seattle Sunglasses Company's downtown shop, repeats the mantra in a July 2011 interview with Sunglasses magazine:

SG: Do you think the weather in Seattle has any impact on your business?

DL: Seattle has highest per-capita sunglasses sales than any other major city in the nation.

Liao goes on to cite an active-outdoors population, the mountain geography, and tourism as reasons for the perennially strong sales:

We do have a lot of water and people are active year round—whether they’re runners or cyclists—so they’re looking for eye protection, which is why we do sell a fair amount of bronze lenses and lighter color lenses. And we’ve got two mountain ranges where we get low sun at the horizon, so we get that really bright blue sky, sunny mornings, and all winter long when you’re driving, there’s a lot of glare. And even when it’s overcast, there’s a significant amount of light. But you definitely do see the seasonalities as well. We’ll definitely pick up sales in mid-February, as people are getting ready to go on spring break—we’ve got a lot of snow birds that go down to Arizona, Palm Springs, CA, or Hawaii. But, of course, the traditional strong months in spring and summer are just as strong for us because we’ve got tourists.

His explanation of popularity is plausible, but it is qualitative and makes no comparison. A salesman in California or Florida, states famous for their sunshine, could easily make a similar statement.

Without hard sales figures from stores in Seattle and other American cities, there is no way to disprove the claim of the highest sales. In the end, it's easy to dismiss this as sales banter.

Is there any data available to prove his claim? 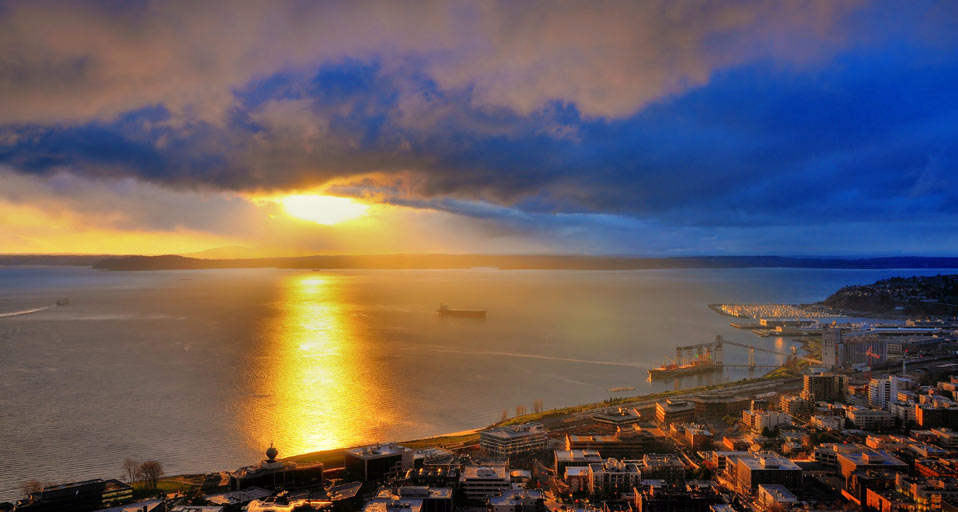 Photo: Seattle Sunset from the Space Needle by Mohammed Kamel

The USCB's report of its 2007 economic census contains data that strongly suggests the Seattlites' claim is false.

The report contains a table that sorts each US state for which data exists by total sales in USD. It includes a computed per capita column that we can use as evidence against the claim if we know that Seattle is in the state of Washington. 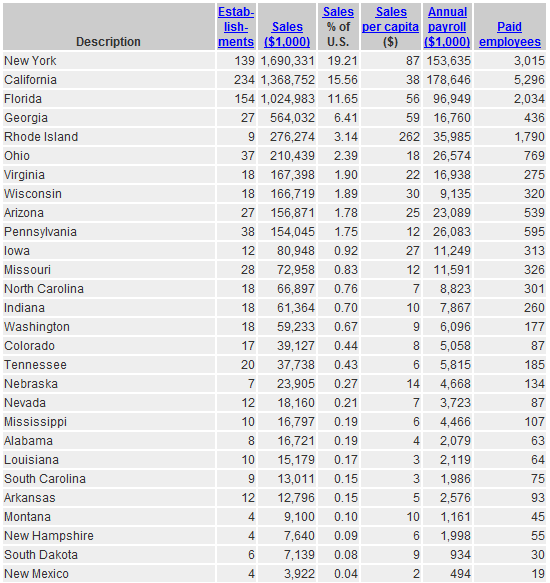 For clarity, I removed the row that represents the US total sales and the rows for states that have no data.

It's fairly clear that in this class the highest sales per capita ($262) goes to Rhode Island.

Washington has one of the lower sales per capita ($9). 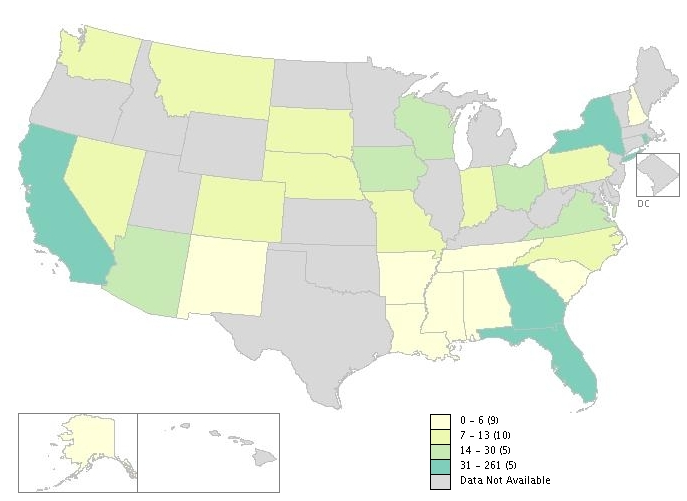 For clarity, I moved the legend closer to the map than in the source image.

When the states are viewed like this, Washington appears insignificant. What stand out again are California, Florida, New York, and Rhode Island.

All the data I could find aggregates at the state level, no finer. The report is not detailed enough to prove that Seattle sells less sunglasses than some other city. I believe the state-level evidence renders the possibility highly unlikely.

Because of the way the report aggregates industries, we could be being mislead by high sales in lines other than sunglasses. Again, I think it's unlikely. Besides, I've heard no-one make proud claims about how myopic their citizens are.

8
Does any U.S.-sold brand of “100% pure” fruit juice contain added HFCS?
10
Are consumer-grade laser pointers sold in the US lasers?
15
Are there more guns in America than people?
21
Are Fox News viewers more likely to believe misinformation than viewers of other news outlets?
26
Is the US more tolerant of failure than other cultures?
11
Is radioactive milk being sold in inner-city black neighbourhoods in New York?
69
Are black Americans responsible for more than 50% of homicides?