While all efforts should be made to get emergency food aid to Africa during this famine, the tradition of US food aid in Africa is actually part of the problem. Giving food to the hungry seems like the epitome of charity, but under the current system it has stifled the growth of agriculture in Africa and helped continue the cash crop system forced on Africa during Colonialism.

This Facebook meme extends the claim to all countries: 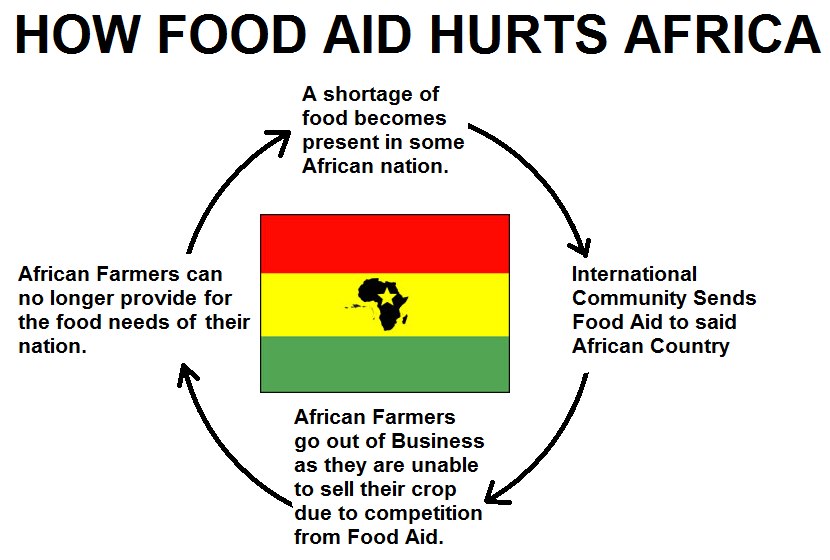 This is not limited to Africa, either, and as the first article shows, this "charity" is affected by politics and affects business: Haitian farmers undermined by food aid

The food aid from the USA is also expensive ($2.3 billion in 2010) but not expensive enough to be adequately nutritious: U.S. food aid must boost nutrition for long-term recipients, adopt sturdier packaging

Without food aid, farmers cannot survive a famine, and therefore any economic incentive or disincentive is a moot point. The cycle depicted in the chart is false, because it relies on a model of famine that is outdated and incomplete.

The cycle in the graphic depicts a speculative economic model based on famines caused by FAD - Food Availability Decline. Unfortunately, the FAD model does not take into account important characteristics of a famine, the most notable to this question being that agricultural workers suffer famines disproportionately. Farmers are the first to starve and the first to die of hunger. This is because famines work according to the FEE model - Failure of Entitlement Exchange, which replaced FAD as a more complete and accurate model in the early '80s. (Entitlement here being an academic term for "stuff to buy or barter.") What happens is that food and labor are both commodities - and a farmer's Endowment (an academic term meaning stuff he can use to trade or buy) is insufficient to exchange for enough food to survive. A bag of rice is worth X amount of hours of labor - but in times of famine, no amount of labor is going to be enough to exchange for food.

Non-agricultural workers - tradesmen, professionals, merchants and the political class - will usually have enough resources - endowments - to secure a share of a dwindling supply of food, or to import their own supply - entitlements. Farmers, who rely on part of their harvest as their entitlement, cannot do likewise. Similarly, once conditions improve, they need to return to farming to obtain other, non-food entitlements, such as clothing, education, phone bill, etc. - a depressed market due to food aid means poor prices initially after a famine, but that's better than, you know, dying.

This paper (in PDF) includes a good overview of the FEE model, with clear explanations for laymen, as well as various criticism of FEE and the responses to them.

It's not necessarily a problem when wealthy companies invest in agricultural land in poor countries for commercial use. But when families are kicked off the land or less food is grown as a result, that's a very big problem indeed. Recent data indicates that at least 33 million hectares of land deals have been identified since 2001 – an area 8 times the size of the Netherlands.

And since the food price spikes of 2008, that's been happening more and more.

Demand for land has soared as investors look for places to grow food for export, grow crops for biofuels, or simply buy-up land for profit.

But in many cases, land sold as “unused” or “undeveloped” is actually being used by poor families to grow food. These families are often forcibly kicked off the land. Promises of compensation are broken. Often people are violently evicted by hired thugs.

Assuming The Office of the Compliance Advisor/Ombudsman is a more credible source than Oxfam, here's one recent report Oxfam's land grab page linked to:

Background to the Complaint

The IFC-supported Agri-Vie Agribusiness Fund is a private equity fund with the purpose of making equity investments in agribusiness companies in Southern and Eastern Africa. In its current portfolio, Agri-Vie has invested in New Forests Company (NFC), a UK-based forestry company operating established and growing timber plantations in Eastern Africa. Operational in Uganda since 2005, NFC operates three pine and eucalyptus plantations - in the Mubende, Kiboga and Bugiri districts respectively.

In December 2011 affected community representatives, Oxfam International, Oxfam Great Britain, and the Uganda Land Alliance (a national consortium of organizations advocating on land issues) submitted a complaint to the CAO on behalf of people living around the plantation in Mubende. The complaint raised concern s about evictions and displacement in the plantation area, alleging that the evictions negatively impacted the communities by displacing them from land, destroying their private property, and forcing them to forgo health, education, and livelihood opportunities. The complaint also voiced broader concerns about the IFC’s due diligence.

Energy, Environment and Resources EER PP 2013/01, "The Trouble with Biofuels: Costs and Consequences of Expanding Biofuel Use in the United Kingdom", by Rob Bailey, April 2013 agrees with Oxfam's research:

Current biofuel standards do not ensure biofuel use is sustainable

Agricultural biofuel use increases the level and volatility of food prices, with detrimental impacts on the food security of low-income food-importing countries.

So Africans are too poor to buy their own food, if they can even grow it, because they're being robbed of their wealth by greedy people.*

If they were able to, they could aid themselves, so food aid is not the cause of famines.

a selfish desire to have more of something (especially money)

Assuming the victims of alleged land grabs as "other people", then those responsible for them losing their land are greedy. QED

Feel free to refute my logic in the comment section.

Coca-Cola has committed to ending abuse among its suppliers:

In Q1 2014, we will incorporate and publish FPIC guidance into our Supplier Guiding Principles under the section regarding Laws and Regulations as well as in the Sustainable Agriculture Guiding Principles, establishing auditable criteria for FPIC to be implemented as new supplier audits are conducted.

Yet, if poor people cannot earn money by working for low wages, how will they be supported if not through aid (e.g. social security)? The USA had child labor (source, source), but is now #2 at obesity: Study. Would the USA have prospered without that shameful phase? The exercise of answering that question must be left for another occasion.

Not the answer you're looking for? Browse other questions tagged economics charities africa .

35
Can we grow enough crops to feed all people on Earth?
25
Can we end poverty for $US175 billion per year?

12
Are food deserts a real phenomenon?
24
Is it cheaper to eat fast food?
53
Does UNICEF use less than 14% of the donated money for the advertised causes?
5
Does the Humane Society of the United States provide only 1% of their budget to pet shelters?
14
Does "raising awareness" have a meaningful impact?
2
Has the US given more aid to the average Israeli citizen than the average American citizen?
4
Did Food Prices Spur the Arab Spring?
7
Are high temperatures the cause of nudity being not unusual amongst the Daasanach?