Was there 100% turnout and 100% Obama support in Cuyahoga County in 2012 Presidential Election? 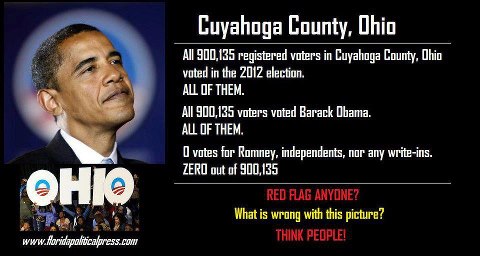 Is it accurate that:

Here are the results of the Nov 6th 2012 election for Cuyahoga county Ohio.. A simple Google search found this.

I apologize in advance for the the language but - why do people think they can get away with spreading this bulls**t?

P.S. I've updated for the official certified results, which were not significantly different from the 'unofficial' results published on the day.

The graphic attributes the data to "www.floridapoliticalpress.com".

However, the Florida Political Press web-site disavows the graphic and the data in it, as a distortion of their earlier claims:

an unknown individual created an image [...] based on the aforementioned article, distorting the information within and then tagged Florida Political Press as the verifying source of this blatantly false production.

As can be seen, it states that ALL of Cuyahoga County voted for Obama, which IS NOT true and is not stated in the article. I’d guess this is the work of some well meaning individual distraught over the results of last Tuesday’s election, however, this effort distorts the truth, assaults my integrity and hurts the conservative movement because it gives detractors (Far Left) the opportunity to dismiss everything coming from bloggers on the Right. [...]

With an assist from a reader, I was able to track the photo to a FaceBook page titled ‘Let’s Make Fun of Liberals – A Political Stomping Ground‘… ironically, it espouses the virtues of free speech. While the page does not identify who is behind it, I was able to send a message requesting that the image be deleted – thus far, no response.

Google is your friend: Official results from the Board of Elections:

38
Is voter fraud practically non-existent in the United States?
22
Did Barack Obama receive 108% of the vote in one Ohio county?
8
Did the Republican Party in the House of Representatives recently propose not a single job bill, but many morality and gun-related bills?

5
Colorado non-citizen vote vs Tennessee's photo ID frequency
38
Is voter fraud practically non-existent in the United States?
22
Did Barack Obama receive 108% of the vote in one Ohio county?
6
Were there 1 million fraudulent votes in the 2012 US election?
9
Are there 141 US Counties that have more registered voters than residents?
40
Was JFK's 1960 election win due to fraud?
45
Were a large number of votes from suspiciously old Pennsylvanians received in the 2020 US presidential election?
6
Do the 2020 votes for Trump and Biden add up to more than the total number of votes made?