One day, while bouncing around some alternate history and conspiracy theory videos I came across a reference to a man named Drunvalo Melchizedek. I was curious about some of his work and decided to check out one of his books The Ancient Secret of the Flower of Life. In the very first chapter I started questioning some of the claims about his research and decided to start fact checking, and hit a dead end on my first query (...not a huge surprise for a book in the New Age section).

In his book he states that there was a blind woman named "Mary Ann Schinfield" that was studied by NASA and had some extraordinary psychic-like abilities.

Here is an excerpt from another of his books, Living In The Heart:

I met Mary Ann Schinfield, an outstandingly unusual woman. (I mentioned her briefly in the first volume of The Ancient Secret of the Flower of Life.) Mary Ann was completely blind and technically had no eyes, could see absolutely nothing. However, she was able to perform normal everyday tasks — she could even read a book and watch television without any outside assistance. NASA scientists performed extensive tests to determine how she was able to "see." They asked her what she was seeing inside her head while she was sitting in a room, and she—as she related to me later—told them that she was moving through space and was continuously watching what was going on in the solar system. Even more interesting was that she said she was restricted to this solar system and couldn't leave. Of course, NASA didn't believe that she was "moving through space," and so they made up a test to see whether she was telling the truth. They asked her to move alongside one of their satellites and give them some kind of a reading from it, a serial number or something. I'm not sure what it was, but she did it precisely, and from that moment on, Mary Ann belonged to NASA. They have never let her go and continue to use her for their own purposes.

However I cannot find a single shred of evidence or information about this woman. All my searches lead me back to Drunvalo Melchizedek. Does anyone have any information on this? Is it completely bogus?

This is completely bogus.

Although absence of evidence is not evidence of absence, her name has no results on the NASA website (only Mary Ann Esfandiari does; unrelated).

Taking another look at the book you mention, it is full of claims that are highly implausible (to put it mildly): 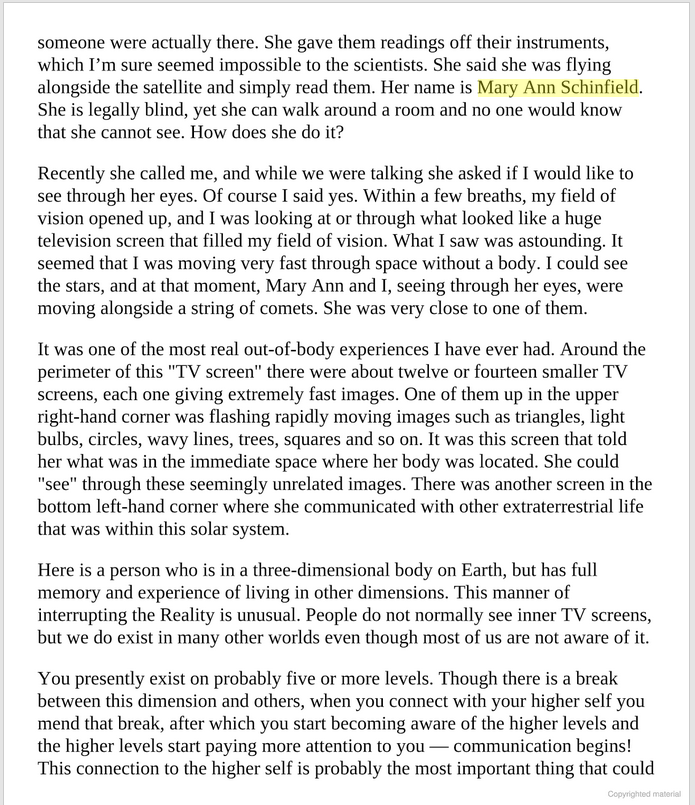 There are rational explanations for out-of-body experiences, and can in some cases be actively induced, according to a publication in the New England Journal of Medicine:

It has been suggested that out-of-body experiences are the result of a transient failure to integrate the visual, tactile, proprioceptive, and vestibular information that converges at the temporoparietal junction, especially on the right side of the brain. Out-of-body experiences have attracted the most interest when reported by people who have had near-death experiences, but they have also been reported to occur spontaneously in patients with epilepsy or migraine and have been induced by electrical stimulation of the temporoparietal junction on the right side in patients with epilepsy.

References within that article contain many more medical explanations for perceived out-of-body experiences.

Whether there has been a person called Mary Ann Schinfield is difficult to determine. However, the claims about this person are incredibly unlikely to be true.

Not the answer you're looking for? Browse other questions tagged psychics nasa .

13
Is this video from NASA proof that LENR is a real effect?
25
Did Neil Armstrong find aliens on the moon?