A family member posted a link to a blog about companies using slave labor.

While the title is a bit misleading because it is not the companies themselves directly employing slave labor but rather their suppliers in foreign countries. Most of the claims boil down to sources using people under 18 working long hours for low pay rather than true slavery.

However I did find one claim that I found very troubling:

In Uzbekistan, the government actually removes throes of children from school and places them in cotton fields during the harvest season.

My question is: Is this an accurate statement that the government literally goes through schools and takes children to use as forced labor harvesting cotton?

Literally forces them? probably No. Compels them by threats of expulsion from school, lower grades or stigmatisation - Probably Yes.

Each September the cotton harvest begins. Many rural schools are closed down by government officials as children, some as young as nine, are forced to pick cotton by hand for up to three months in order to fill the shortfall in voluntary adult labour. They receive little, if any, pay.

And it's not just limited to children

Forced labour within the industry does not just affect children. Local administration employees, teachers, factory workers and doctors are commonly forced to leave their jobs for weeks at a time and pick cotton with no additional compensation. In some instances refusal to co-operate can lead to dismissal from work.

Additionally, there was a BBC Newsnight report on this subject back in 2007

As part of a special report we filmed children in Uzbekistan being forced to work in cotton fields instead of going to school.

However, the Uzbek embassy denied even then that they use Slavery, torture or coersion

The legislation of the Republic of Uzbekistan forbids any form of child labour on the cotton fields. full statement

Have things changed since 2007? Probably not, the BBC again ran a piece in September of 2011 which reports the situation to be mostly the same.

The BBC's Uzbek service has received reports of school children being bussed to agricultural areas in various parts of the country.

One human rights worker in Uzbekistan said she had talked to a 10-year-old girl who said her class was made to pick cotton in the mornings and attend lessons only in the afternoon.

This is not unique to Uzbekistan, and was a standard practice all through USSR. Older age schoolchildren and all college students, every single autmn, were forced to go "Na kartoshku" (the best idiomatic translation I can think up is "Go potatoing"), which basically was mandatory yealy harvesting trips to the collective farms to help with whatever harvesting was needed (the term was always the same even when the crop in question had nothing to do with potatoes). In Russia, it usually was around September/October for college students and summertrime (~20 days) for school kids.

Please note that - since the average school years were 6/7 YO to 16/17 YO before 1990s reforms - even freshman college students would be under 18.

Granted, in Uzbekistan it was/is a more heavy load, often with entire summer instead of 20/30 days, and presumably cotton picking is harder than other harvesting (citation needed).

Source: Having lived in USSR when everyone went potatoing :) The linked Wikipedia article has some sources, and Google has a lot more, e.g. [1], [2 - by Russian Premier Dmitry Medvedev], [3] but the phenomenon is basically a cultural artefact experienced by pretty much every citizen and therefore not worth referencing extensively. 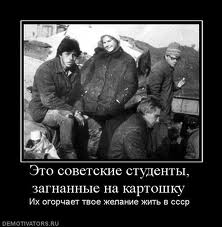 Not the answer you're looking for? Browse other questions tagged children labor slavery .

5
Does organic cotton use less water than conventional cotton?

30
Did the Irish Catholic church have slaves in Ireland as recently as 1996?
5
Are there fewer Americans in the labor force than in 1979?
8
Does clapping children on the back in certain positions help clear mucus from their lungs?