UFO theorists claim that there are US laws preventing people from investigating or contacting aliens.

From "Alien Contact Laws- $5,000 Fine And Imprisonment" at http://www.unexplainable.net/artman/publish/article_223.shtml

Already Passed by Congress On October 5, 1982, Dr. Brain T. Clifford of the Pentagon announced at a press conference ("The Star", New York, Oct. 5, 1982) that contact between U.S. citizens and extra-terrestrials or their vehicles is strictly illegal. According to a law already on the books (Title 14, Section 1211 of the Code of Federal Regulations, adopted on July 16, 1969, before the Apollo moon shots), anyone guilty of such contact automatically becomes a wanted criminal to be jailed for one year and fined $5,000.

From "UFO theorists gain support abroad, but repression at home" at http://www.ufoevidence.org/documents/doc598.htm we have this claim of censorship regulations:

If the US military is concerned about UFOs, it is not saying so publicly. Indeed, the French report chastises the United States for what it calls an ''impressive repressive arsenal'' on the subject, including a policy of disinformation and military regulations prohibiting public disclosure of UFO sightings.

Air Force Regulation 200-2, ''Unidentified Flying Objects Reporting,'' for example, prohibits the release to the public and the media of any data about ''those objects which are not explainable.'' An even more restrictive procedure is outlined in the Joint Army Navy Air Force Publication 146, which threatens to prosecute anyone under its jurisdiction - including pilots, civilian agencies, merchant marine captains, and even some fishing vessels - for disclosing reports of sightings relevant to US security. 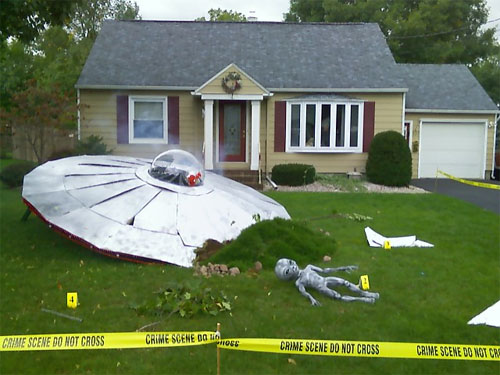 Is there evidence that these, or similar laws or regulations exist?
Is it specifically illegal to investigate a crashed spaceship yourself, chat with the occupants, or discuss such a "genuine" event with others?

According to these references:

The law did exist, but did not make contact illegal. Specifically, it made quarantine by the US government of an exposed person (exposed to any celestial body, such as the moon by the Apollo 11 crew) legal, in the event that any danger (think Andromeda Strain) was present (1211.104.a.3):

It has, apparently, been removed from the the books. The official .gov site for Title 14 simply says "Reserved" (3rd link), but the second link above contains supposed text of a 1991 removal of the quarantine section of the code:

Summary: NASA is removing 14 CFR part 1211 since it has served its purpose and is no longer in keeping with current policy.
Effective Date: April 26, 1991.

Not the answer you're looking for? Browse other questions tagged law aliens ufo .

16
Are there reptilian creatures hosting the news?
7
Are incarcerated pedophiles protected by special laws in federal prison in the US?
9
Are there discriminatory laws against Israelis marrying Palestianians?
64
Are there any laws preventing the copying of keys containing a DO NOT DUPLICATE stamp?
3
Are "young people aged 14 and 15 are allowed to have sex with each other" in Germany?
5
Are all Oreo-cookie ingredients listed in accordance with EU ingredient labelling regulations?