Is yawning contagious across species?

The Mythbusters have "confirmed" the contagiousness of yawning between humans and this study concludes it may be part of a neural network involved in empathy.

This hypothesis is supported by another study that found that children under the age of 4, and children with autism, are less susceptible to contagious yawning.

Yawning also seems quite common in the animal kingdom 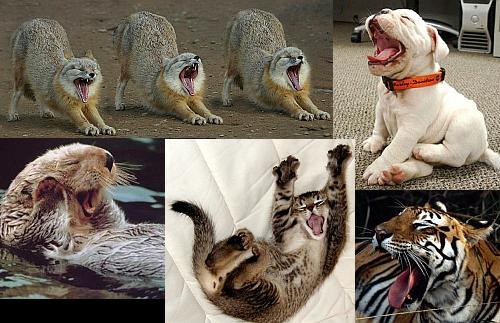 and apparently humans can "infect" dogs with their yawning, which made me wonder:

Is yawning contagious across species? Are there studies researching this?

A 2008 university of London study showed that dogs can catch yawns from people who are strangers to them. http://news.bbc.co.uk/1/hi/sci/tech/7541633.stm

Anecdotally, my cats often catch yawns from me!

It is freely available on the web: http://www.currentzoology.org/paperdetail.asp?id=11922

Aim of the study was to find an animal that does not show empathy or non-social mimicry and see if that species showed contagious yawning. If so, it would support the first hypothesis, if not, it would rule it out.

The result of their paper:

So we have at least one species that yawns, but doesn't yawn contagiously.

Long story short...there is no evidence to support an answer one way or another. Even in humans only 40%-60% (at best) find a yawn to be contagious.

36
Are humans the only species that hunts down competitors, denies and destroys food for others?
20
Are yawns contagious?
25
Are some species of animals born pregnant?
24
Is reviving an extinct species possible?
6
Can some species of jellyfish live forever?
15
Are humans the only species to have permanently enlarged breast?
43
Does a human on a bicycle travel more efficiently than any other species?
13
Are species becoming extinct at a rate of 0.01%-0.1% per annum?
53
Do studies show that viruses are contagious?