I came across the following unsourced claim: 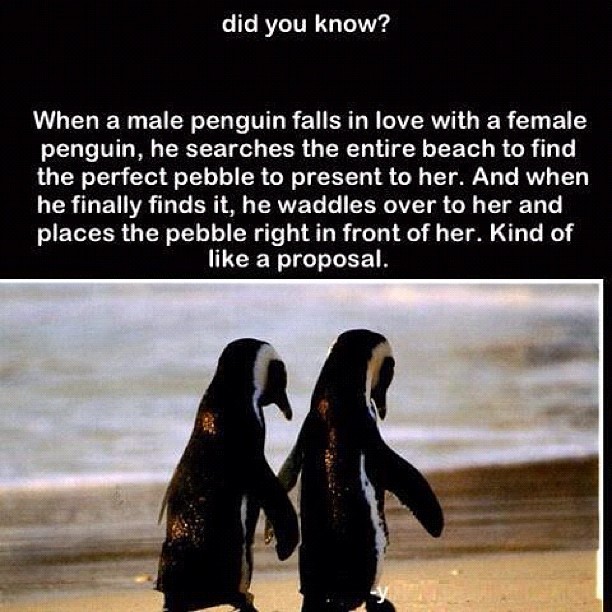 When a male penguin falls in love with a female penguin, he searches the entire beach to find the perfect pebble to present to her. And when he finally finds it, he waddles over to her and places the pebble right in front of her. Kind of like a proposal.

A quick search on Google brings up lots of pages like "The Penguins FAQ" stating it is just a myth:

I heard that when Adelie penguins are choosing a mate the male searches for the perfect pebble and presents it to the one he wants as his mate. It's a myth based on the fact that Adelie penguins build nests out of pebbles. And they build the nest while they do the courting, so it's actually partly true. I guess a penguin who doesn't bring any pebble wouldn't stand a chance, but any pebble will do and both mates bring them in!

I could not find any specific peer reviewed study on this, aside from a couple of papers showing that (very unsurprisingly) hormonal levels play an important role in courtship and nest leaving in Adélie penguins.

Should I stay or should I go? Hormonal control of nest abandonment in a long-lived bird, the Adélie penguin. - Horm Behav., 2010

Seaword.org gives a few clues (with refs) about courtship

a. Courtship varies among the species. It generally begins with both visual and auditory displays. In many species, males display first to establish a nest site and then to attract a mate.

b. Most penguin species are monogamous (one male breeds with one female during a mating season) (del Hoyo, et al., 1992); however, research has shown that some females may have one to three partners in one season and some males may have one or two partners (Davis and Speirs, 1990).

c. Mate selection is up to the female, and it is the females that compete for the males (Davis and Speirs, 1990).

d. A female usually selects the same male from the preceding season (Sparks and Soper, 1987). Adélie penguins have been documented re-pairing with the previous year's mate 62% of the time. Chinstraps re-paired in 82% of possible cases, and gentoos re-paired 90% of the time (Trivelpiece, 1990). In one study of Adélies, females paired with males within minutes of arriving at the colony (Davis and Speirs, 1990).

e. When a female selects a different mate it is usually because her mate from the previous season fails to return to the nesting area. Another reason may be mistiming in returning to the nesting area. If they arrive at different times and miss each other, one or the other penguin may obtain a new mate (Davis and Speirs, 1990).

Again, the idea that the male builds a pebble nest first and then starts the courtship fits in very well and Occam's razor would favour this one rather than some forced antropomorphisation of penguins.

According to the same page:

So, it seems the male would have to go on and on bugging the female a couple of thousand times to show her yet another pebble he collected... This seems unrealistic and this behaviour seems not to have been reported.

We can conclude that, lacking further scientific proof, this is just another myth.

Its funny how we anthropomorphise almost all animal behaviour that we find even slightly similar to our own.

However in this case it's more akin to you bringing home a brick to your girlfriend for building your house, than scouting the local jewelery stores for a dimond ring perfect for her.

Gentoo penguins are less likely to stick together than other penguins and can be found in small groups, sometimes with other species. Although they are not strongly attached to the same nest site (they have plenty of choice of sites) their pair-bonding is strong, and they usually mate with the same partner as the previous year. They nest on low hilltops or open beaches. When available, they make a nest with pebbles and other objects, and sometimes use a scrape in the ground - but all nests are fiercely defended

According to the Edinburg Zoo they Genntoo penguins do: http://www.edinburghzoo.org.uk/news-and-events/news/articles/news_0089.html

Pebbles are very important to penguins as you'll see here:

As you'll see there penguins do give female penguins pebbles, but not as a token of affection nor because they are shinny. Pebbles are gathered to form a proper nest.