Do corporations own human DNA sequences?

I came across the claim that Human DNA sequences are now owned by corporations: 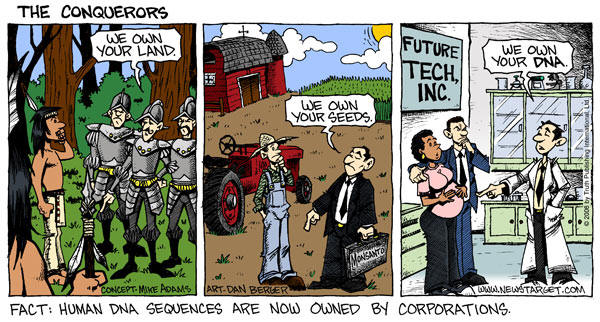 If so, what does this mean?

(I realise question 2 may be off-topic on this site, but I find it is really part of question 1)

It all depends on what you mean by "own".

The major issue is that of patents of individual genes, particularly in the United States. A study in 2005 published in Science suggested 20% of human gene DNA sequences were patented and that some genes were patented as many as 20 times. But (in theory at least) each patent is not of the gene itself, but of its use for a particular purpose. A recent example in the news was the Myriad Genetics patents on the BRCA1 and BRCA2 genes, linked to diagnosing breast cancer, which were upheld by the US Federal Circuit Court of Appeals.

But this is not ownership in the standard sense. The company cannot sue you if you reproduce your genes in the natural way. Nor can you sue the company if one of their genes in your body damages you.

There may also be copyright issues if you have your full DNA sequenced and that too has been discussed. But it is much less likely to be a significant issue, as you can always have it resequenced, rather in the way a photograph of a mountain may be copyrighted but this does not prevent a different photograph of the same mountain.

Not the answer you're looking for? Browse other questions tagged genetics copyright dna .

14
Has natural occuring genetic insertion ever been observed in direct offspring of some organism?
34
Length of uncoiled human DNA
17
Do humans share 99% of their DNA with rats?
9
Do commercial DNA synthesis labs maintain a "watch list" of dangerous DNA sequences?
6
Are Ashkenazi Jews genetically more European than Semitic?
103
Is 8% of human DNA from viruses?
4
Do the hemoglobin genotypes of a couple affect whether their offspring will get Sickle Cell Disease?
2
Was human DNA found in a sample of Priorix Tetra MMRV vaccine?