A Boy with the Magnetic body & healing hands, How this is scientifically possible? [duplicate] 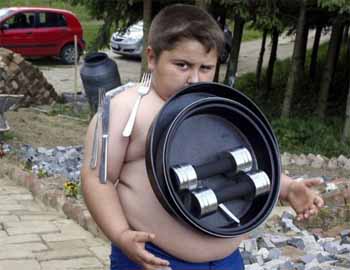 A six-year-old Croatian schoolboy Ivan Stoiljkovic has a magnetic personality and astounds people with his magnetic body. He can stick metallic objects such as spoons, mobile phones and even frying pans to his body. In total, his family says, he can carry up to 25kg (almost four stones) of metal stuck to his torso. But they say his talents don’t end there. It is claimed he has “healing hands” which he uses to ease pain. Grandfather Ivo said when he was having pains in his stomach; Ivan laid his hands on his body. They became extremely hot and the pain went away.

This can't just be a talent, (not a talent at all indeed) , then how he has these abilities ? Does it have something to do with Static electricity ?

Whoo, Problem solved... As I've already mentioned, It's a FRAUD. There are other people like this young lady who says that she has got so may positive & negative charges. Adding to that small kiddo.

These people could also attach some plastics or wood objects and even a rubber where magnetic fields don't take place at normal conditions (you require a good value of Teslas for that). However, when these magnetic people have been tested, there's no evidence of a magnetic field being produced. One thing should be noted that, "All these people are using their skin (body surface) to do their astonishingly smart magic activity. They should've done it with clothes in order to prove it. They don't require some nudeness... My sources say that, It's completely based upon FRICTION.

A good image as PROOF:

This could be noted in that boy's photography either...