Is Tagg Romney the owner of a company that makes Ohio voting machines? 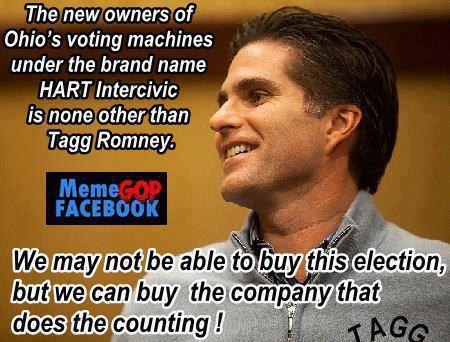 The new owners [sic] of Ohio's voting machines under the brand name HART Intercivic is none other than Tagg Romney.

We may not be able to buy this election, but we can buy the company that does the counting !

Is it true that members of the Romney family own this company? Are these machines actually used in Ohio?

Hart InterCivic Inc. is a privately held United States company that provides elections, and print solutions to jurisdictions nationwide. While headquartered in Austin, Texas, Hart products are used by hundreds of jurisdictions nationwide, including as of October 2012, all counties of Texas, the entire states of Hawaii and Oklahoma, half of Washington and Colorado, and certain counties in Ohio, California, Colorado, Illinois, Indiana, Kentucky, Oregon, Pennsylvania, Texas, Virginia and Washington

This information is backed up by a press release on Hart Intercivic's website:

From there you have to follow the paper trail.

Taggart Romney is publicly the Managing Director and Co-Founder of Solamere Capital.

According to Forbes, Solamere Capital or its subsidiary Solamere Advisors has an ownership stake in private equity firm - HIG Capital - who report:

Furthermore, it is reported that:

H.I.G. Capital has on its board of directors at least three close associates of the Romney family. H.I.G. Capital directors John P. Bolduk and Douglas Berman are major Romney fundraisers. So is former Bain and H.I.G. manager Brian Shortsleeve. H.I.G. employees have contributed at least $338,000 to Romney's campaign. Fully a third of H.I.G.'s leadership previously worked at Romney's old Bain firm.

Still, it is unclear if the investments made by Solamere are involved in H.I.G. Capital's transactions relating to Hart InterCivic. A Solamere spokseman tells The Weekly Standard no:

“Not only does Solamere have no direct or indirect interest in this company [Hart Intercivic], Solamere and its partners have no ownership in this company, nor do they have any ownership in nor have made any investments in the fund that invested in the voting machine company,” the spokesman said.

FactCheck.org takes a stab at the accusation and concludes there is little reason to suspect foul play:

We cannot independently confirm Solamere’s statement, since it is a private company investing in another private company. But this much is clear: There is no evidence to disprove the company’s public declaration that it did not invest in Hart InterCivic.

It appears this conspiracy theory is just about debunked.

4
Does the Canadian Charter of Rights and Freedoms not apply to government hiring practices?
15
Is Walmart the largest company in history?
5
Was Roscoe Filburn ordered to destroy his crops?
38
Is there a correlation between voting for the Democratic Party and gun crimes in the USA?
12
Are the last two primaries and caucuses won by Hillary Clinton under investigation for major voting irregularities?
8
Are the voting figures correct in this image about historical US decisions by party?
18
Did Mueller indict a Russian company that didn't exist?
9
Is voting by mail subject to substantial fraud in the US?