Has the War on Drugs disproportionately affected minority communities?

The premise of Eugene Jarecki's The House I Live In documentary is that the US War on Drugs, other than being a mostly failed campaign, has also disproportionately affected minority communities. A summary of the film's premise is presented on its website:

While recognizing the seriousness of drug abuse as a matter of public health, the film investigates the tragic errors and shortcomings that have meant it is more often treated as a matter for law enforcement, creating a vast machine that feeds largely on America’s poor, and especially on minority communities. Beyond simple misguided policy, THE HOUSE I LIVE IN examines how political and economic corruption have fueled the war for forty years, despite persistent evidence of its moral, economic, and practical failures.

The filmmaker iterates the claim on a recent interview with Bill Maher, where (0:30 of the video) he's answering a question about whether the campaign is a war on minorities as:

Michelle Alexander, in her book The New Jim Crow: Mass Incarceration in the Age of Colorblindness, claims:

In the era of colorblindness, it is no longer socially permissible to use race, explicitly, as a justification for discrimination, exclusion, and social contempt. So we don’t. Rather than rely on race, we use our criminal justice system to label people of color “criminals” and then engage in all the practices we supposedly left behind. Today it is perfectly legal to discriminate against criminals in nearly all the ways that it was once legal to discriminate against African Americans.

I was rushing to catch the bus, and I noticed a sign stapled to a telephone pole that screamed in large bold print: The Drug War Is the New Jim Crow.

Are there studies, preferably non-partisan, to support the claim that the War on Drugs has disproportionately affected or even targeted minority communities?

Wikipedia has a farily long list of such studies. The more interesting ones are those that try to eliminate confounding factors typically by inserting them as explanatory variable in a regression model. For instance:

And the actual study's model & fit: 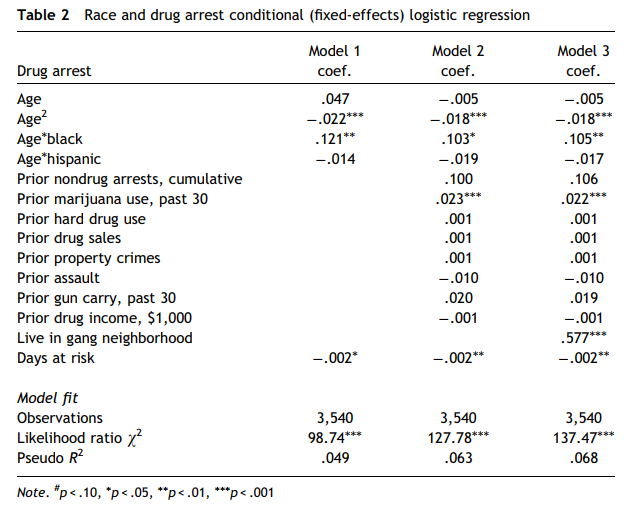 The reason for age squared in the model is that very old and very young people don't get arrested as much as the middle aged. The "age" variable above is also centered at age 16, i.e. age = 0 means 16-years old. The fact that prior marijuana but not "hard drug" use was significant is explained by the authors as the (prior) arrests being mostly for marijuana possession. And they further note that this is by design of the "War on Drugs", which intended to hold all drug offenders accountable... the majority of which turned out to be marijuana possessors. However the main finding, quoting the study's authors, is that

Simply stated, roughly 85% of African-Americans’ higher probabilities of drug arrest are not attributable to differences in drug use, drug sales, nondrug offending, or neighborhood context. Instead, our findings are consistent with Beckett et al.’s explanation, which attributes African Americans’ higher probability of drug arrest to racial bias in law enforcement. To be clear, these findings do not prove that blacks’ elevated rates of drug arrest are due to racial bias in law enforcement—these findings are simply consistent with such an explanation.

This is consistent with other/prior research, which may not have controlled for as many potential confounding variables, but is usually easier to present, e.g. also quoting from Wikipedia:

A 2013 study by the American Civil Liberties Union determined that a black person in the United States was 3.73 times more likely to be arrested for marijuana possession than a white person, even though both races have similar rates of marijuana use.

So whether the War on Drugs was intended (or not) to target minorities, it has certainly worked as an amplifier for the racial bias in policing.

From a different paper on juvenile delinquents:

Not the answer you're looking for? Browse other questions tagged united-states recreational-drugs politics race .

12
Does USA imprison people of color at a higher rate than whites for the same crime convictions?
7
Is AD/HD over diagnosed within the US

52
Did the CIA sell drugs in the US?
3
Are drugs, sex and weapons the largest three markets?
16
Are SWATs in the US mostly used for serving marijuana warrants?
11
Did the Nixon administration use anti-drug law against anti-war movement?
25
Can you determine the type or quality of illicit drugs by tasting them?
18
Did Ehrlichman claim the reason for the Nixon drug war was to criminalize black people and hippies?
83
Do blacks in the US get arrested more often for drug usage despite using drugs at the same rate as whites?
38
Did the DNC claim in court that it has no obligation to have a fair and impartial primary?
6
Has the US declared war since WWII?