Are most terrorists Muslim?

Those arguing for more profiling quite frequently claim that while not all Muslims are terrorists, most terrorists are muslim. Is there data to show that more than 50% of terrorists attacks can be attributed to any one religious or political affiliation.

To clarify some.
Terrorism : The use of violence, outside of war, to manipulate or coerce a population.
Region : US and Europe

The answer to this question varies greatly, depending on country you are from.

If you're from the Netherlands, Islamists represented 100% of the individuals suspected of terrorism each year from 2006 to 2009 (between 2 or 6 per year), except in 2007. On the other hand, if you are from France, then, while Islamists do represent a sizable number of the arrested suspects, the percentage is far lower (342 out of 1468, or 23.2%) in the same timespan.

In the United States, more than 80% (186 out of 228) of all convictions tied to international terrorist groups since 9/11 involve defendants driven by a radical Islamist agenda.

The European Union has a graph of arrested terrorism suspects by Member State in its Terrorism Situation and Trend Report 2010: 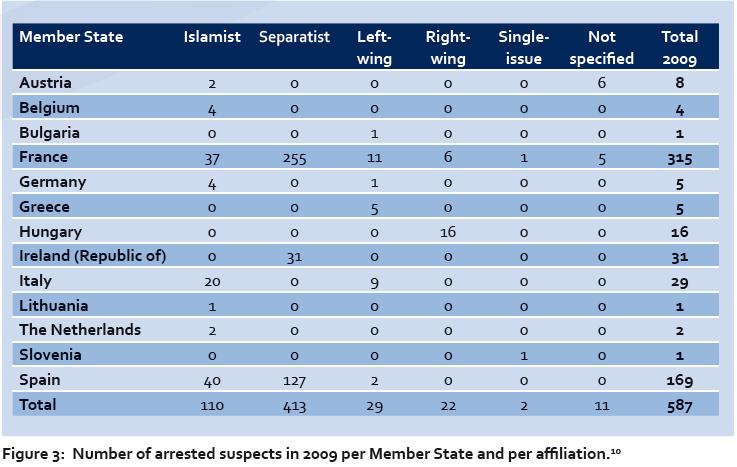 It also states that:

The number of arrests relating to Islamist terrorism (110) decreased by 41 % compared to 2008, which continues the trend of a steady decrease since 2006.

Since you're interested in those numbers to discuss more profiling, arrested suspects are not what is interesting to look at. Instead, that would be successful attempts.

There are few successful attempts, at least in Europe, over the last few years. For example, there was only one attempt in 2009:

..and it was foiled.

The preceding years are not very different. In the recent years, Islamist terrorism has not been very successful. For example, the Terrorism Situation and Trend Report 2008, which reports on terrorism in the European Union in 2007, states that:

However, as the report notes, "The failed and attempted attacks mainly aimed at causing indiscriminate mass casualties." As such, even one successful attack can lead to a large amount of causalities.

According to the FBI data only 6% of all terrorist in the US between 1980 and 2005 were Muslim. There were even more Jewish terrorists.

For the US the categorical claim "more than 50% of terrorists attacks can be attributed to Muslims" is therefore false.

Robert Pape, in Dying To Win, provides evidence that most suicide terrorists are not Muslim:

"No previous analysis of suicide terrorism has been able to draw on a complete survey of suicide terrorist attacks worldwide. This drawback, together with the fact that many such attacks, including all those against Americans, have been committed by Muslims have led many in the United States to assume that Islamic fundamentalism must be the main underlying cause. This, in turn, has fuelled a belief that anti-American terrorism can be stopped only by wholesale transformation of Muslim societies, a belief that helped create public support of the invasion of Iraq. Comprehensive study of the phenomenon of suicide terrorism, however, shows that the presumed connection to Islamic fundamentalism is misleading." (p38 of the 2006 paperback edition)

He goes on to show that most suicide attacks are carried out by the Tamil Tigers in Sri Lanka. Again, this evidence is just for suicide terrorism, so much depends on how you define 'terrorism'.

The NCTC used to publish yearly reports via the Worldwide Incidents Tracking System (WITS), which indicated the religion group of perpetrators of terrorist attacks worldwide. This service was discontinued in 2012, however all of their reports have been archived.

For the purposes of this analysis, the NCTC used the following definition of "terrorist":

NCTC analysts determine if an event meets the definitional criteria of 22 U.S.C. § 2656f(d)(2) as an act of terrorism

Their yearly reports clearly show that Sunni terrorists make up an absolute majority of deaths caused. The majority holds for all of the individual years that were available on the archives. For example, this is the deaths breakdown by perpetrator group for the year 2008: 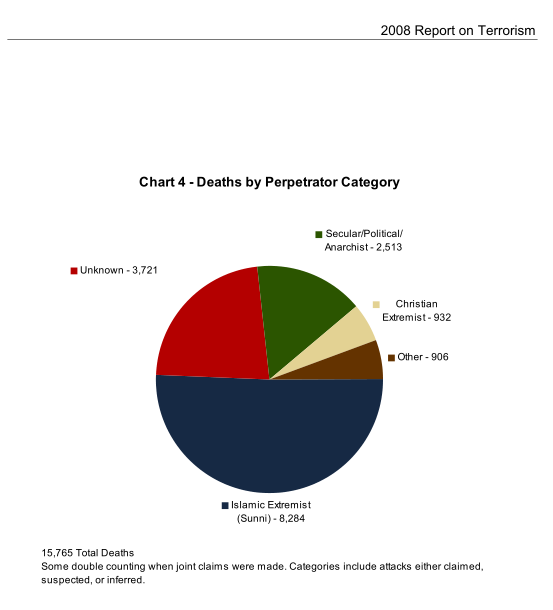 While the breakdown by number of attacks was not stated in the reports from 2005-2008, they stated in their 2010 report that Sunni terrorists made 60% of attacks in 2010, and caused 70% of all terrorism-related deaths.:

Sunni extremists committed almost 60 percent of all worldwide terrorist attacks. These attacks caused approximately 70 percent of terrorism-related deaths, a significant increase from the almost 62 percent in 2009.

In their 2009 report, the NCTC also made similar statements:

Sunni extremists were identified with about one-half of all attacks in 2009. Almost 90 groups were associated with these attacks. According to open source reports, the Taliban claimed credit for the largest number of attacks causing the highest number of fatalities. Al-Shabaab was the second deadliest group, followed by al-Qa’ida in Iraq as the third deadliest group.

Therefore, for the limited timeframe surveyed by the NCTC WITS, we can say that Muslim terrorists perpetrated the most attacks and caused the most deaths worldwide.

According to dictionary the definition of terrorism:

"the use of violence and threats to intimidate or coerce, especially for political purposes."

Using this definition for terrorism then no, most terrorists are not Muslim. The largest group of terrorists includes people from different religions and ethnic backgrounds who all wear government uniforms (some examples are here, here, and here).

As Brendan Behan so astutely pointed out:

"The terrorist is the one with the small bomb."

Not the answer you're looking for? Browse other questions tagged religion politics .

6
Is this true that few terror attacks are motivated by Islam?

19
Does Pakistan harbor terrorists?
42
Are atheists barred from holding public office in Texas?
15
Did Muslim immigrants rape over 300 Swedish children in seven months of 2013?
75
Are thousands of Islamic terrorists entering the United States?
6
Are white people who believe Obama is Muslim largely Trump sympathisers?
2
Does Maryam Namazie identify as a Muslim?
12
Do 75% of new Muslim converts in the US leave Islam within a few years?
8
Did all of Germany's Muslim MPs vote in favor of same-sex marriage?
8
Will the new Royal Adelaide Hospital have a Muslim-only prayer room while other religions share?