Is the Bible the most read book?

I have often heard that the most popular book is the Bible, but it seems to me that, for example, classical Indian books as the Mahabharata or the Chinese Four Books and Five Classics may be more popular. Does any one have any source related to that?

The Bible still remains at the top as the most read book in the world.

I was maybe hopping for a better metric then the number of book sold (if it exists). As it is mentioned in the comments, many produced Bibles were probably never read. I have no idea what metric could be used.

Since it's virtually impossible to count the number of people who have read any published book, the claim must be analysed on purely statistical/circumstantial evidence. I propose to show whether the Bible is the most widely available book in terms of translations and copies. Then I will examine whether a copy of the Bible is more or less likely to be read than other likely contenders.

According to Wycliffe Global Alliance the Bible as a whole is available in 471 languages which covers 4.8 billion people: 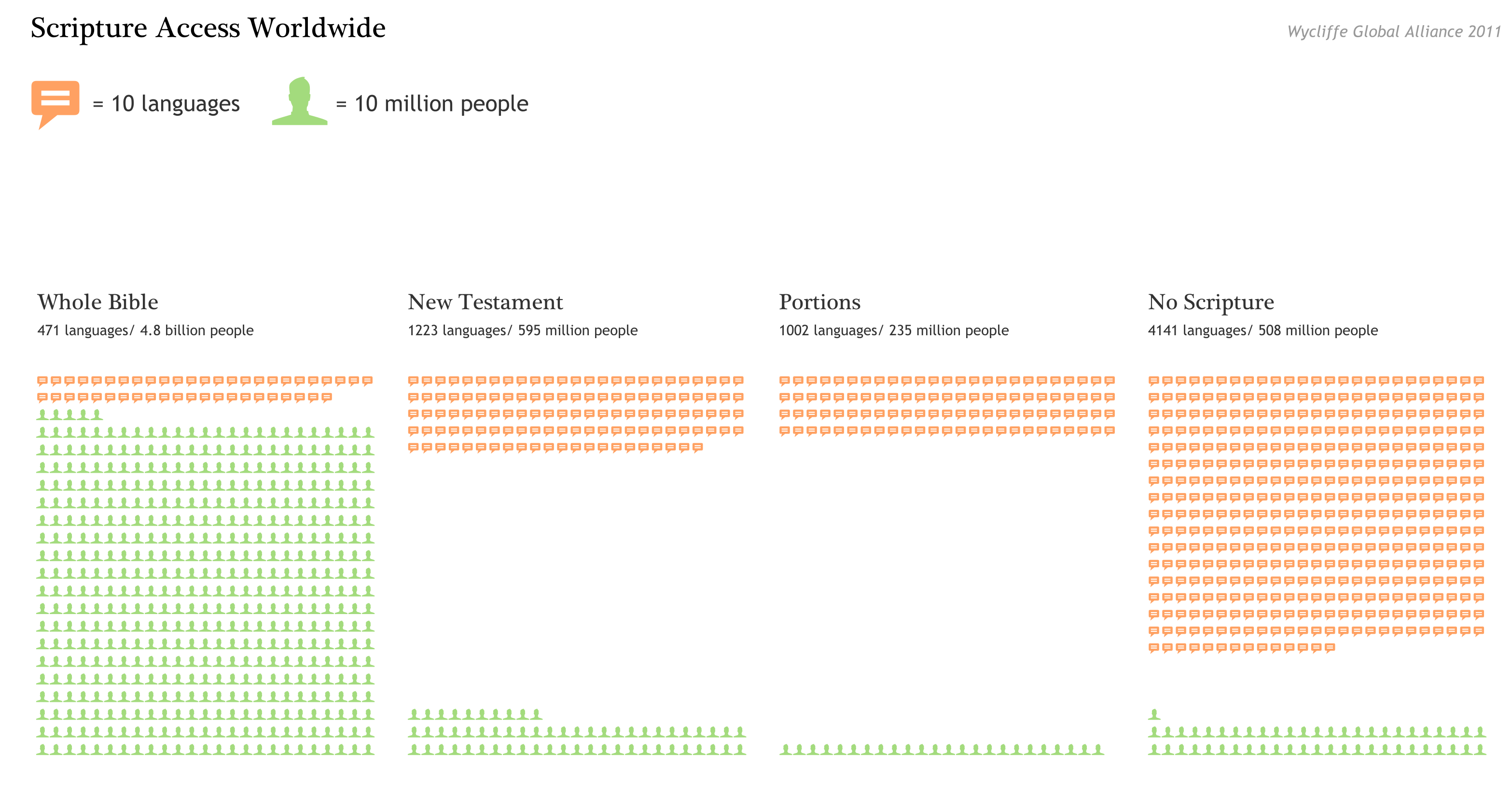 I have been unable to track down reliable numbers for other works, including the two listed in the question. Don Quixote is often cited as the second-most translated book, but I have yet to even find a number of target languages associated with it. As a point of comparison, Quotations from Chairman Mao Tse-Tung had been translated into 65 languages by 1967. The Qur'an exists in at least 112 languages. In terms of language availability, it seems unlikely that any work exceeds the Bible.

Wikipedia's list of best-selling books excludes the Bible, the Qur'an, and Quotations from Chairman Mao because of the difficulty of obtaining accurate figures. However, the Gideon's International (of hotel-drawer-Bible fame) estimates they have distributed "1.7 billion Bibles and New Testaments". Last year, they counted 78.9 million copies. Many websites list "6 billion Bibles", but I can't find a solid source. This number seems to be a guess.

There may be 6.5 billion copies of The Little Red Book. Apparently, the actual number is somewhat smaller, however. Because of changes in China, Mao's Quotations are extremely unlikely to be read anywhere near as often as other contenders. I think it safe to remove this remarkable volume from further consideration.

According to this 2007 article in The Economist, Saudi Arabia gives away 30 million copies of the Qur'an each year. Most estimates for the total number of existing Qur'ans that I've found begin with the suspect assumption that each Muslim owns a copy.

Again, I could find no figures for either Mahabharata or Four Books and Five Classics. I also had difficulty finding any verifiable figures for any book with more than a billion copies besides the three listed above. Surprisingly, The Book of Mormon has only been printed 150 million times, which is roughly the total for The Lord of the Rings.

In terms of total copies, the most reliable evidence suggests that the Bible probably wins out over any other book. There's a chance that the Qur'an approaches the same levels, but we have no solid data either way.

Of course, having a copy of the Bible does not mean the book is actually read. I personally have more copies of the Bible than I can count as did my father as did his father. Anecdotal evidence suggests that most Bibles distributed by the Gideon's and most "family Bibles" are rarely opened and never actually read.

On the other hand, it seems quite likely that most books being sold are not read. A 2007 Associated Press-Ipsos poll conducted in the United States, which has almost universal literacy, suggests that 27% of adults do not read books at all. That year, 3.1 billion books were sold in the country. Active readers read 7 books a year, which suggests that something like half of the books purchased were not read that year.1

However, the article about the poll did note:

The Bible and religious works were read by two-thirds in the survey, more than all other categories.

Another poll (PDF) by the Barna Group and commissioned by the American Bible Society, found that the average US household had 4.3 Bibles. While that does indicate that many people own more Bibles than they read, it also suggests that, at least in the US, a Bible is likely to be on-hand when someone wants to read one. More helpful to the question, however, the study asked how often the respondent read the Bible:

Now, this is self-reported and only in the US, which is probably the best case scenario for independent Bible reading. Even so, it's difficult to imagine any book besides the Bible and the Qur'an which could hope to be read even occasionally by 69% of the population.2 That 26% claim to read often enough to finish the entire Bible once a year is staggering. Very few books hold up to multiple readings across many generations. If the question were focused entirely on the US, there's no question that the Bible is the most read book.3

Given that people (especially Christians) believe they should read the Bible, it could be argued that these polls over-report Bible readership. YouVersion, a popular Bible app, reports live statistics. At the moment, the software has been installed 57 million times. According to the site, 28.5 billion minutes of reading have been logged. A simple average shows 500 minutes per installation, which works out to 8 hours and 20 minutes. Of course there's no way to know how many of those installations are active. Another measure is the 3.8 million reading plans finished so far. Not all of the plans are daily or cover the entire Bible, but it does indicate that at least 6% of YouVersion users are regular readers of the Bible.

The Bible versus the Qur'an

From the evidence above, the only two possible contenders for "most read book" are the Bible and the Qur'an. If another book can claim significant readership, it has left little statistical evidence. Certainly the works suggested by the question do not register on any of the lists I've been able to discover. The Bible has a lot of statistical evidence to back its readership claim, but there's a nontrivial possibility that the Qur'an has it beat. From The Economist article:

Reciting the Koran is the backbone of Muslim education. One of the most prized honorifics in Islamic society is “hafiz” or “one who has the entire scripture off by heart”. Do so in Iran and you get an automatic university degree. The great recitors compete in tournaments that can attract audiences in the hundreds of thousands—the world cups of the Islamic world. The winners' CDs become instant bestsellers.

If we expand the definition of "reading" to include listening to a live or recorded recitation, the Qur'an can claim a much larger, undocumented readership.4

If the question considers the US only, the Bible clearly is the most read book. Worldwide, the Bible is no worse than the second-most read book. Whether the Qur'an is more widely read is difficult to determine because of the lack of statistical information.

Not the answer you're looking for? Browse other questions tagged history bible books religious-texts .

22
Is the IKEA catalogue being distributed in more prints than the Bible?
9
Is the bible the most shoplifted book?

22
Is the IKEA catalogue being distributed in more prints than the Bible?
15
Did the Swiss not produce anything of importance aside from cuckoo clock?
18
Was the character of Lilith written out of the Bible?
13
Did William Shakespeare help make the KJV bible?
66
Do 33% of high school graduates never read another book for the rest of their lives?
5
Is the name of Prophet Muhammad mentioned in the Bible?
9
Is the bible the most shoplifted book?
22
Has anyone ever memorized the entire bible?
14
Does the average software developer not own (or has never read) a book on software development?
7
Is the New Testament significantly corrupted from its originally intended form?