Does Louis Vuitton burn all their unsold bags?

It first ran across the notion with this meme 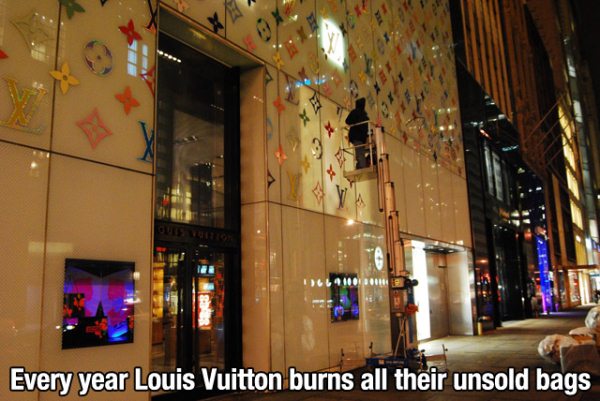 Every year Louis Vuitton burns all their unsold bags

A google search yields lots of results but none of them seems credible. Snopes yields nothing.

I work nearby the flagship LV shop in Paris, and I am pretty surprised by this kind of rumours. In fact, there is a constant line to enter the shop, like an Apple store if they were releasing a new iPhone every day of the year. Does Apple burn unsold iPhones? No because there are none.

For the record, 2 years ago, Louis Vuitton had to close all shops 1 hour early during fall season, in order to avoid stock shortage during Christmas holidays, despite raising price (yes, raising already over-priced items), according to Le Figaro, a credible French newspaper.

I honestly don't see why LV could not sell all their production.

While I couldn't find evidence for Louis Vuitton destroying their unsold products, except for the original article, there are proof for other companies doing it.

The clothing retailer H & M promised on Wednesday that it would stop the practice of destroying new, unworn clothing that it could not sell at its store in Herald Square, and would instead donate the garments to charities...

She also found bags of new Wal-Mart garments with holes punched through them...

A Wal-Mart spokeswoman, Melissa Hill, said that she had been unable to learn why new clothing with the store’s tags had been destroyed, but she added that the company typically donated or recycled such items.

And yes, this rumor appears to be true. Chanel has been known to burn leftover goods at the end of a season. In an attempt to outrun counterfeiters who make millions each year producing fake designer bags, Chanel has burned leftover stock so that no part of its brand is left to easily duplicate. Coco Chanel herself is believed to have initiated the first conflagration. In addition, disposing of leftover stock this way helps to preserve the upper-class nature of the brand (only a few can afford it, as opposed to deep-discounted sale items winding up on the arms of middle-class soccer moms). In addition, the idea of a Chanel bonfire only adds to the mystic of Coco and her brand.

Also, from the same source about LV:

Myths circulating around fashionable Internet forums claim Chanel never goes on sale. This is not true, however, the myth likely stems from other, high-end designers of handbags, such as Louis Vuitton, which historically does not put its pieces on sale.

Another source for Chanel:

Years back I had written about how Chanel burns any merchandise that doesn't sell.

LV doesn't sell its products with discounts, and destroying unsold products is a common practice with both high-end and less expensive brands to avoid counterfeiting and increase the exclusivity of the brand. So it's a safe assumption that LV are destroying their unsold products. Not necessarily by fire, but still destroying them instead of putting them on sale.

Not the answer you're looking for? Browse other questions tagged economics consumer-products marketing corporate-finance .

41
Does Ryanair use cookies to raise the price of their tickets after you have visited the site before?
39
Does Germany want their gold back?
3
How much does the White House pay to their employees?
81
Does fossil fuels use since 1990 account for half of all the fossil fuels used in history?