Do windmills in Ireland turn clockwise, unlike the rest of the world?

I've seen a few places online (example) that lays out a statement, essentially with two claims.

"Windmills always turn counter-clockwise. Except for the windmills in Ireland."

So there are two claims to check:

A couple of the sites I've seen claim it might be a local custom or design, but that's hypothetical; none of them provide proof of this, or where the 'facts' come from.

Can anyone provide some insight into these claims?

The older windmills have any spinning CW or CCW, in fact in the district of Cambridgeshire, England, you have an example of nearby similar mills whose sails rotate in opposite directions in Cambridgeshire at Bourn (anticlockwise) and Great Gransden (clockwise). reference, here are some not so great pictures: 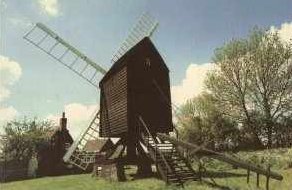 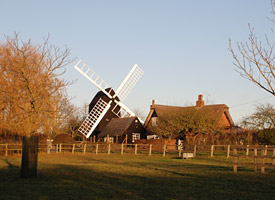 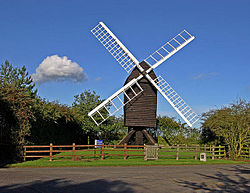 As you can check in my studies (for the fun), and in this Website, the spinning depends of the shape of the blade... and the likes of the owner. Why?, well because...

In olden times all of the 'dutch' type of windmills turned left and there was a reason for that. The sails were rigged on long pegs that were driven right through the spars and stuck out a long way beyond toward the trailing edge. The windmiller would hammer these pegs through the main spar, climbing up them like a ladder from the tip as he went. Being mostly right handed, they preferred if the pegs went in from the right hand side and so the trailing edge was on the left of the sweep. This made the sails turn anticlockwise.

Modern Windmills enforce this, for the practical reason, the nuts and the force:

If your prop is attached to the generator using a Single Bolt or Nut, then you would want it to rotate Clockwise which would keep it tightened up.

Reference Here, the same discussion board

but lastly the proper design of the blades instead of just "put the blades in the opposite direction" will reverse this effect.

CW as seen on this video here, here or there.

CCW as seen in this Video, also here or here and here.

Lastly in a related question Physics SE, we can see that the latest wind turbine generators take great care to prevent "reverse spinning" and have two sets of turbines (CW and CCW type) will just add cost and work overhead.

"Windmills always turn counter-clockwise" - False, it depends of the design and construction of the wind mill or wind turbine. Mainly right handedness of the builder/fixer in the older ones for CCW and Bolt/nuts design for CW in the-not-so-old windmills.

Wind turbines can go either way, but company/market policies dictate a CW or CCW for supplies (blades and generators), maintenance manuals, personal training and connection to the power grid (see physics SE).

"Irish windmills turn clockwise" - False, it depends too, same reason as above.

A single counter-example is sufficient to show that this statement is not strictly true. This windmill in Orange County, Iowa is a clockwise windmill. And it appears that Blennerville Windmill - Tralee is an anti-clockwise windmill.

Interestingly, however, a google for images of windmills does suggest that the majority do turn counter-clockwise (assuming that the pictures returned by Google are not mirror-images). However, it isn't clear that the Irish windmills buck that trend.

It is possible that the idea originates from a common (at least in England) stereotype of the Irish as being prone to doing things in the opposite way to the way it should be done.

Not the answer you're looking for? Browse other questions tagged architecture .

21
Is there any other skyscraper that was destroyed totally just by fire except the three World Trade Center towers?
5
Did the British attempt to rename the Taj Mahal?
4
Was the Taj Mahal originally called Tej-o-Mahal?
11
Are there any underground cities in the United States?
5
Has the legendary city of Dwarka been found under water?
7
Will the Sheikh Jaber Al-Ahmed Al-Sabah be the 'longest bridge' in the world?