At the NAACP, Attorney General Eric Holder said Tuesday he opposes a new photo ID requirement in Texas elections because:

"the State of Texas filed against the Justice Department under Section 5 of the Voting Rights Act seeking approval of its proposed voter ID law. Now, after close review the department found that this law would be harmful to minority voters ... Many of those without IDs would have to travel great distances to get them and some would struggle to pay for the documents they might need to obtain them. We call those poll taxes."

It seems to depend on who you ask, and they will depend on different interpretations of the same data gathered since HAVA went into effect.

tl;dr Photo ID does not seem to lead to minority voter suppression, but it does lead to drops in lower income voter participation.

The results provide some evidence of vote fraud and that regulations that prevent fraud can actually increase the voter participation rate. It is hard to see any evidence that voting regulations differentially harm either minorities, the elderly, or the poor. While this study examines a broad range of voting regulations, it is still too early to evaluate any possible impact of mandatory photo IDs on U.S. elections. What can be said is that the non-photo ID regulations that are already in place have not had the negative impacts that opponents predicted. The evidence provided here also found that campaign finance regulations generally reduced voter turnout.

So, according to this one (conservative) commentator, non-photo ID laws do not affect turnout, while the jury is still out on whether or not photo ID laws do affect turnout.
Lott's arguments seem to mimic those of @user1873; namely, that participation increased, so therefore there could not have been a suppression of the vote. Later in the paper, he states:

How did these laws impacted voter participation rates? As a first crude measure, I only considered states that had changed their laws over time to compare how the participation rates changed when the laws changed. Obviously this simple comparison ignores that many other factors are changing, but it at least compares only the same states over time.

He goes on to provide a number of other metrics, but they all seem to rely on the assumption that the introduction of a voter ID law should result in a lower number of participating voters. To me, this seems like a shaky assumption, when such a small percentage of potentially eligible voters is participating in any given election. If only 50% (or fewer) of people are voting, then increasing to 54% does not mean that some people were disenfranchised, it just means that more people decided to go vote. People could still have been disenfranchised, and not reflected in final vote tallies.

Richard Atkinson argued in 2007 that the logic in Lott's article is incorrect:

Unfortunately, it's paywalled, like many other legal documents on the subject, which limits my ability to present the results here.

Figure 5 of the paper shows: 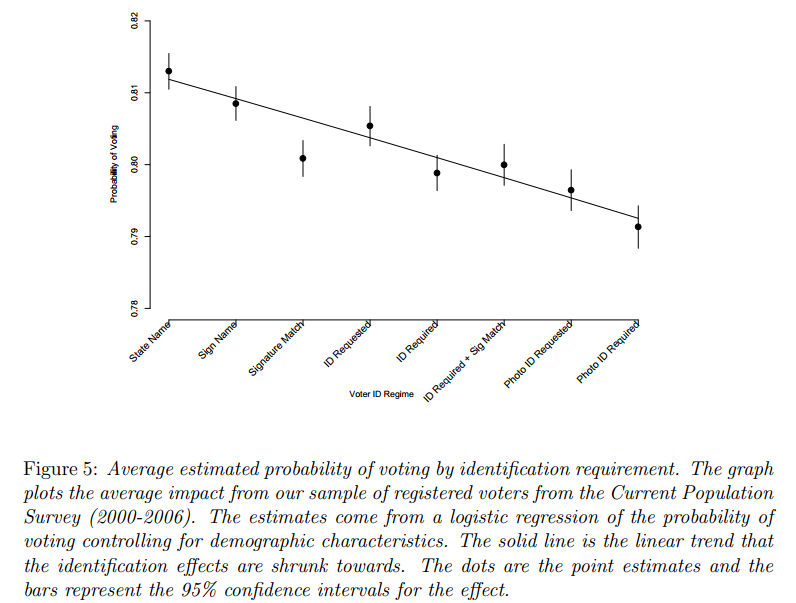 Given that this second paper acknowledges the incompleteness of the aggregate data in describing voter behavior, and then proceeds to address that lack in a closer examination of individual behavior, I believe they have produced a more robust argument that stringent voter ID laws lead to voter suppression.

Even so, they proceed to Figure 6, which shows that there's no correlation between race and voter suppression, and suggest that it is actually whites who are more disenfranchised than non-whites: 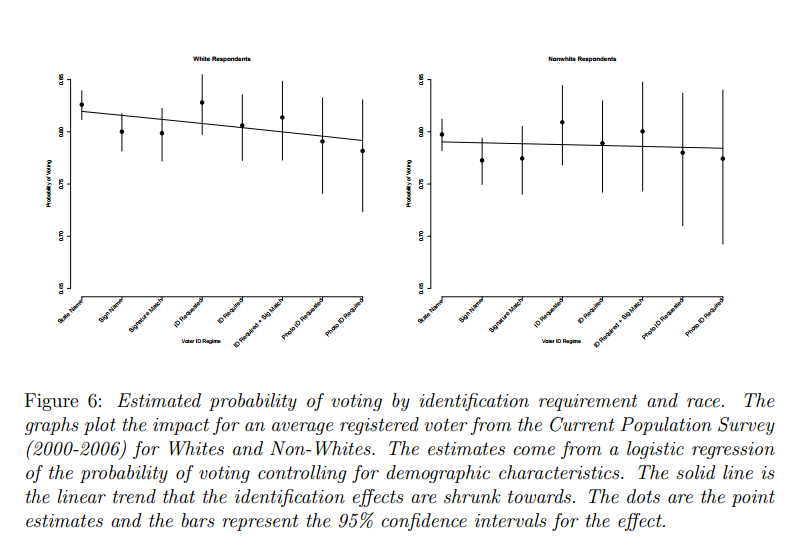 Note, however, the very large error bars for the minority voters-- this gap is probably why the problem is so difficult to resolve.

Even so, the authors claim that it is not race that determines real suppression, but income. They continue, with a later figure: 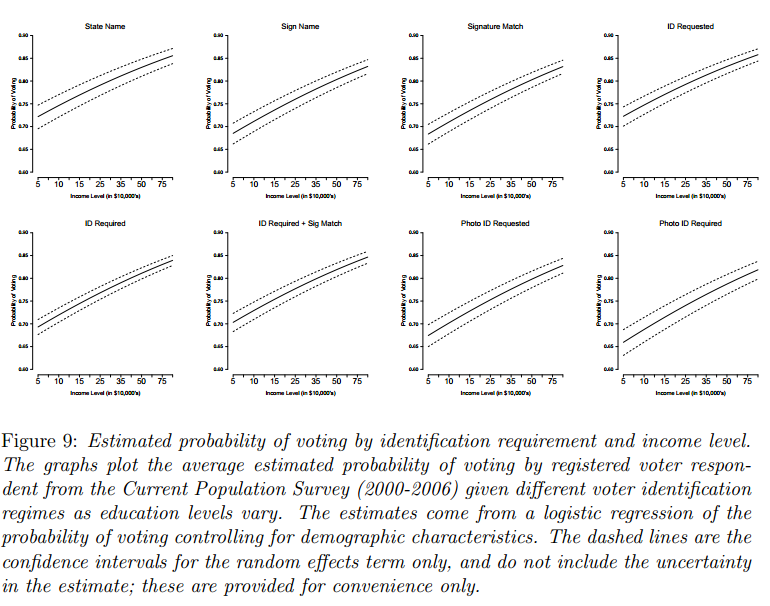 Note that people with $50k or less in income have a ~72% chance to vote with just stating their name, and ~66% chance to vote if required to present photo ID, compared to 85% to 83% reduction for those making $750k. To me, that's a very significant effect, and clearly demonstrates that photo ID requirements will reduce turnout of lower-income voters.

This hasn't been true in Georgia, which has a similar Voter ID law to Texas.

Georgia Secretary of State Brian Kemp has the data to back it up.

The 2008 elections were the largest in Georgia’s history, featuring record turnout among minority voters with the photo ID requirement in place. The following figures represent voter turnout statistics among Hispanic/Latino, African-American and White voters from the 2004 and 2008 General Elections.

The slides above were presented by Kemp at the Civitas Conservative Leadership Conference. He notes:

He reported that in the four years since the law was implemented, Georgians cast tens of millions of votes in 40 state and federal elections and hundreds of city and county elections, and the law has withstood challenges in four courts. He also said that the opponents of photo ID have failed to find one individual who has been harmed due to the requirement.

Even when opponents can find plaintiffs for their cases, when they lose the case, the plaintiff turns around and gets a VoterID the next day.

14
Is there a significant difference between voters' and non-voters' preferences in political elections?
9
Are voter ID laws effective tools at *suppressing* voter fraud?
17
Is it, in some parts of the U.S., easier to get a rifle than to register to vote?
18
Has the War on Drugs disproportionately affected minority communities?
14
Is voter turnout inversely correlated with Republican success?
9
Are there 141 US Counties that have more registered voters than residents?
67
Did Donald Trump say republicans are the dumbest voters in the country?
40
Was a massive case of voter fraud uncovered in Florida?
30
Are there "1,071 Proven Cases of Voter Fraud"?
6
Are these anomalies in the Biden-Trump vote data indicative of voter fraud?