Did the computing term "bug" come from a moth stuck in a computer?

Back when computers still consisted of vacuum tubes, a system went down one day and people started investigating the cause. They found that a moth was stuck in the computer which fouled it up. When asked what was wrong the tech said "There was a bug in the computer", and since then the term has stuck.

Is that a mostly true story, and if so is that where the terms "computer bug" and "debugging" came from?

No; however, this is partly due to semantics, the actual log entry is as follows:

First actual case of a bug being found. 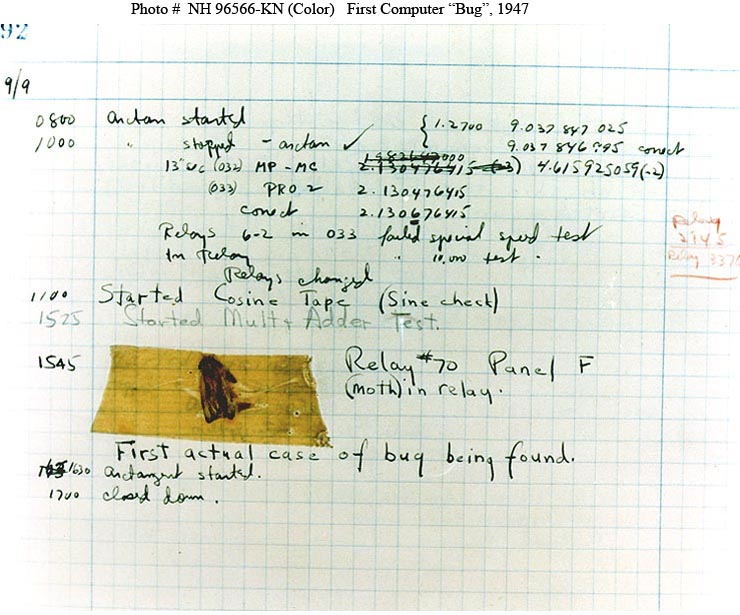 This is a bit of a tongue-in-cheek reference to the term "bug" that was in use at the time meaning:

The term "bug" is used to a limited extent to designate any fault or trouble in the connections or working of electric apparatus.

Whose definition is courtesy of Hawkin's New Catechism of electricity from 1896. So we know the term was already around at the time and from the log entry we can deduce that other mechanical failures were likely called "bugs" as well.

However, it is apparently the first case of an actual bug being stuck in the computer.

14
Was "bug" used to refer to software bugs before being popularized by Grace Hopper?

56
Is a writer named Lisa Holst responsible for the belief that everyone eats eight spiders a year?
11
Can overheating laptops cause fire?
14
Was "bug" used to refer to software bugs before being popularized by Grace Hopper?
19
Did Gandhi trump Professor Peters in a number of interactions?
9
Did Martin Luther refer to physicians who assume diseases come from natural causes as "ignorant blockheads" (or the German equivalent)?
17
Did Two Eagles tell this joke?
10
Did the term "meritocracy" originate in a dystopian satire?
8
Did Ayn Rand use the term "ineptocracy"?
13
Did Margaret Mead say that a healed femur is the earliest sign of civilization?
8
Was the living room called the "death room" around World War I? If so, by whom?