Elastic therapeutic tape, better known as kinesio tape, has become ubiquitous in sporting events, notably after the 2008 Olympic games in Beijing, and again in 2012 in London. 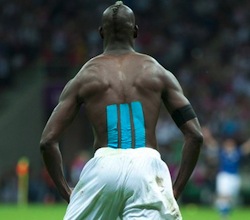 Mario Balotelli, another iconic taper, at the EM 2012.

Websites that sell the tapes are very stingy when it comes to defining which precise effects the tape is supposed to have. However, there seem to be claims that taping stabilises muscles, increase blood circulation and support the lymphatic system. Supposed explanations aren’t detailed, and don’t sound scientifically plausible.

It may be worth noting that the original inventor, Dr Kase, admits to a lack of studies. But this doesn’t deter vendors from claiming effectiveness.

Which, if any, proven benefits does taping have?

One of the sites linked to in the question (www.kinesiotaping.co.uk) has been the subject of a complaint to the UK Advertising Standards Authority:

The complainant challenged whether the following claims were misleading and could be substantiated:

The ASA investigated the complaint and upheld all 4 parts of it.

We considered that the body of evidence provided in relation to this issue was not sufficiently relevant or robust to substantiate the description of the therapy under the heading "How does Kinesio Taping Work?" and concluded it was misleading.

We considered that the body of evidence provided in relation to this issue was not sufficiently robust to substantiate the efficacy claim that the therapy could be used for "Lymphoedema treatment, Sports Injuries, Hand Therapy, Paediatrics, Scar Taping" and concluded that it was misleading.

We therefore considered that the body of evidence did not substantiate the efficacy claims that KT could assist the medical conditions listed on the website, and concluded that the claims were misleading.

LV provided six studies in relation to this issue. However, we considered that they were not sufficiently robust to substantiate the claims

Not the answer you're looking for? Browse other questions tagged medical-science sport .