Does body armor render the wearer "invulnerable" to bullets?

The vicious murderer who shot up the movie theater in Aurora, Colorado last week was wearing, according to some reports, "full body armor."* Proponents of concealed-carry permits maintain that if the theater had not been a "gun-free" zone, the shooter could have been taken out in short order by an armed populace.

Given that the man was wearing body armor, is this a reasonable conjecture? If someone — an off-duty policeman carrying a standard-issue .40 caliber Glock 22, say — had been in the audience and been able to get off three shots at the shooter's center mass, would the impact, while not penetrating the chest cavity, at least have disabled the man long enough for him to be rushed and overpowered, or would he merely have shrugged it off and gone about his gruesome business?

My impression of body armor (absent any experience except from movies and TV) is that it prevents lethal injuries but perhaps transmits enough shock to the body to be extremely unpleasant, possibly disabling. My Google searches haven't led me to anything definitive (and, indeed, I feel a bit skeevy about searching for the term "body armor" on the web in the aftermath of the shooting). Can anyone shed some light on this?

I ask this after reading William Saletan's contention that crazies can escalate the mass-murder war simply by use of readily available "SWAT gear."

*The first reports of the shootings had the man in full body armor. Some people now say this was not true. Please treat this question as a hypothetical about a shooter who was wearing full body armor, including Kevlar vest, etc., as suggested in the Saletan article.

@Rusty cites a DOJ report which discusses body armor in depth. The portions of the document he quotes refer to protection against fatalities from penetration, which is not really what I'm asking about. A portion of the document not cited states:

Officers and police administrators must be aware of the possibility of blunt trauma injury sustained behind body armor that has stopped a ballistic threat (i.e., not been penetrated). Any officer who has had their body armor impacted by a ballistic threat should receive a medical evaluation as soon as possible. Even though the officer shows no after effects other than soreness or a bruise, the possibility of serious internal injury still exists. A prompt medical evaluation will allow for an assessment of occult serious injury.

The crux of my question hinges on whether the "occult serious injury" may include immediate incapacitation from the blunt trauma. Although the text refers to "no after effects other than soreness or a bruise," it should be obvious that trauma resulting in soreness and bruises (such as a punch from someone who knows how to punch) can easily knock a person down, knock the wind out of him, or immediately incapacitate him from pain. For example, this personal account: when I played football in high school, I was once "speared" by a player's helmet during a play. The contact hit me right in the solar plexus, knocking me down and rendering me incapable of doing anything, even drawing a breath, for what seemed like a minute but was probably ten or fifteen seconds. If blunt trauma through body armor could result in the same sort of incapacitation, could not a deranged, body-armored shooter be stopped long enough for him to be overpowered?

While nothing is "invulnerable"; Modern body armor is extremely effective.

As suggested by Saletan, here is the U.S. Justice Department’s breakdown on body armor... 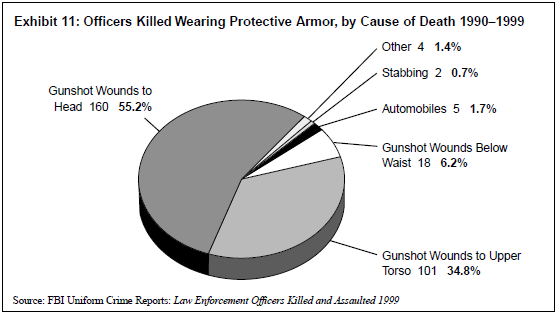 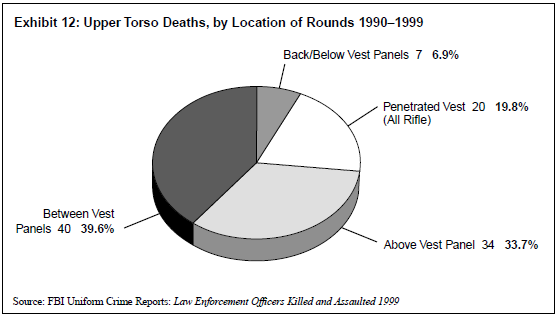 Twenty of the 101 officers killed by gunshot wounds to the upper torso died as a result of rounds penetrating the body armor. Of these 20 incidents, all were the reported result of rifle rounds, which the armor was not designed to protect against. It is important to note that no documented fatal injury has ever resulted from a round of ammunition penetrating body armor that NIJ had approved as protection against that level of threat.

There is evidence that even without any armor humans can be pretty hard to stop:

Short of disrupting the brain or severing the upper spinal column, immediate incapacitation does not occur. Therefore, the threat remains to the officer. Yet, implicit in the media presentations of law enforcement encounters is the belief that with the “proper handgun” and the “proper ammunition,” officers will inflict immediate incapacitation if they shoot offenders anywhere in the torso. Varied and multiple real-life law enforcement experiences contradict this false and dangerous belief.

In the authors’ ongoing study of violence against law enforcement officers, they have examined several cases where officers used large-caliber handguns with limited effect displayed by the offenders. In one case, the subject attacked the officer with a knife. The officer shot the individual four times in the chest; then, his weapon malfunctioned. The offender continued to walk toward the officer. After the officer cleared his weapon, he fired again and struck the subject in the chest. Only then did the offender drop the knife. This individual was hit five times with 230-grain, .45-caliber hollow-point ammunition and never fell to the ground. The offender later stated, “The wounds felt like bee stings.”

And when wearing armor...

So imagine your disbelief when a threat continues to progress-even after you've delivered what would normally be considered "incapacitating" rounds. You think to yourself, Is it the gun? The ammo? Did I hit or miss? I had to have hit, but he keeps coming. Imagine the thud of realization when you determine your adversary is wearing body armor.

Source: Bullet Proof: What do you do when the bad guy seems invincible?

And definitely no sign of "shock trauma" in the 1997 North Hollywood shootout:

In this case, approximately 650 rounds were fired at two very heavily armored men, who had fired approximately 1,100 rounds. The responding police officers directed their fire at the "center of mass," or torsos, of Matasareanu and Phillips. Each man was shot and penetrated by at least ten bullets, yet both continued to attack officers.

Multiple hits only seemed to give these two guys a direction to shoot in.

I could find no other evidence that the force of bullet impact(s) would "have disabled the man long enough for him to be rushed and overpowered".

Ps. I'm not taking a stance on guns here so please don't start that debate.

Not the answer you're looking for? Browse other questions tagged weapons .

98
Can bullets fired into the air kill a person when they fall?
8
Does the use of tasers by the police lead to an increase in people killed by police?
2
Does the GRU-43/B "Massive Ordnance Air Blast" weapon cost $US16 million?