Can Skype wiretap your calls?

The Skype-Open-Source Blog speculates that Microsoft have changed the architecture of Skype in order to facilitate wiretapping:

Two months ago, Skype replaces user-hosted P2P supernodes with Linux grsec boxes hosted by Microsoft, but for what?

Ars Technica reported on the change in infrastructure on May 1st 2012.

Microsoft has drastically overhauled the network running its Skype voice-over-IP service, replacing peer-to-peer client machines with thousands of Linux boxes that have been hardened against the most common types of hack attacks, a security researcher said. The change, which Immunity Security's Kostya Kortchinsky said occurred about two months ago, represents a major departure from the design that has powered Skype for the past decade.

Because Microsoft now controls a the connection mechinism between each call, and controls the software that routes the call they have the ability to route the data (of select clients)to a third party server.

Contrary to what I expected Skype does use encryption. However if you read the answer on the Skype FAQ:

If you make a call from Skype to landlines and mobile phones, the part of your call that takes place over the PSTN is not encrypted.

For example, in the case of conference calls involving two users on Skype-to-Skype and one user on PSTN, then the PSTN part is not encrypted, but the Skype-to-Skype portion is.

Skype uses the AES (Advanced Encryption Standard*), also known as Rijndael, which is used by the US Government to protect sensitive information, and Skype uses the maximum 256-bit encryption. User public keys are certified by the Skype server at login using 1536 or 2048-bit RSA certificates.

So since Skype is the one doing the encryption/decryption it is conceivable that even encrypted calls could be intercepted at this point and recorded/retransmitted.

So the answer to Can they is apparently yes. In answer to will they I would refer you to Vartec's answer. As a result of CALEA any call that involves a phone network (land line or cell), would fall into the realm of the law. Microsoft would be required, with appropriate court orders, to provide Law Enforcement with real time access to the phone call(s) through Skype.

It's clear that from a legal point of view, the are obliged to do so.

The Communications Assistance for Law Enforcement Act (CALEA) wiretapping law was passed in 1994.

requiring that telecommunications carriers and manufacturers of telecommunications equipment modify and design their equipment, facilities, and services to ensure that they have built-in surveillance capabilities, allowing federal agencies to monitor all telephone, broadband internet, and VoIP traffic in real-time.

In 2004 FCC ruled, that CALEA applies to "Internet phone services", which they defined as "providers of interconnected (with the public switched telephone network) Voice-over-Internet-Protocol (VoIP) services". Skype is such a service.

Update: it has been confirmed that they are screening text messages:

"Skype may use automated scanning within Instant Messages and SMS to (a) identify suspected spam and/or (b) identify URLs that have been previously flagged as spam, fraud, or phishing links."

A spokesman for the company confirmed that it scans messages to filter out spam and phishing websites. This explanation does not appear to fit the facts, however. Spam and phishing sites are not usually found on HTTPS pages. By contrast, Skype leaves the more commonly affected HTTP URLs, containing no information on ownership, untouched. Skype also sends head requests which merely fetches administrative information relating to the server. To check a site for spam or phishing, Skype would need to examine its content.

Skype is one of the participants in the PRISM program

But now it seems as though there isn't the bright line separating Silicon Valley from the telcoms like we thought. The Washington Post and The Guardian crack open the White House surveillance scandal even wider by uncovering a secret program called PRISM—a six-year-old classified intelligence program that "[taps] directly into the central servers of nine leading U.S. Internet companies, extracting audio, video, photographs, e-mails, documents and connection logs. 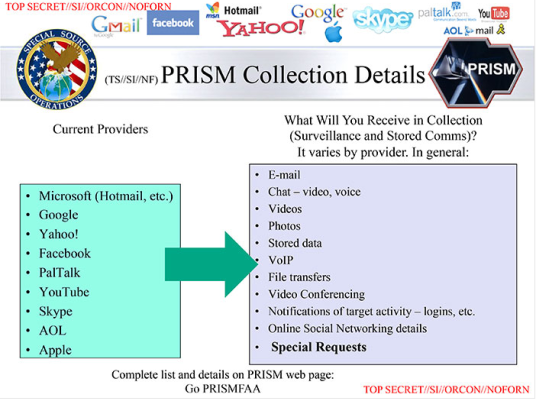 More on this in VentureBeat, which in turn sources The Washington Post, The Guardian, National Journal and more.

Not the answer you're looking for? Browse other questions tagged software surveillance microsoft .

19
Can Microsoft's success be attributed to their abuse of a monopoly
12
Do off-the-shelf software products which claim to "Clean Your PC" work?
18
Does your choice of browser relate to your IQ
5
Can NSA's portable surveillance radars emit 1kW of RF energy?
5
Sharing tool claims files can be "unshared"
10
Did MIT develop software that can recover sounds from video of vibrating objects?
22
Can cell phones be turned on remotely for surveillance by the NSA?
8
Can cell phones be remotely converted into listening devices?
17
AI can guess whether you're gay or straight – how do they get 91% success rate?
5
Can wifi signals be used to read lips?