Does the Humane Society of the United States provide only 1% of their budget to pet shelters? 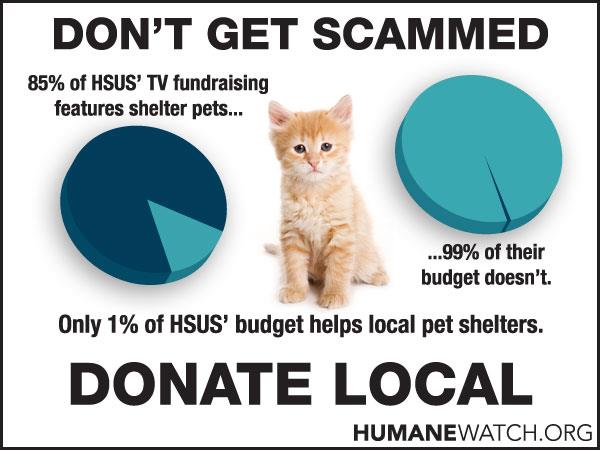 Does the Humane Society of the United States only budget 1% for actually helping animals as claimed here?

I just came across this news article from TribLive. It seems that the Humane Society is not denying the spend, but stating they are more concerned with other things that they see as more important.

“The Center for Consumer Freedom is a fraudulent organization,” Wayne Pacelle, president and CEO of the Humane Society of the United States, told the Tribune-Review. “Their job is to undermine public interests, charities and other entities.”

Pacelle said the mission of the Humane Society of the United States, which has no affiliation with local humane societies, is to bring to light — and bring down — puppy mills, dog and cock fighting rings and baby seal killing operations, among others.

While the national group supports some local programming for dogs and cats, its mission is more broad.

“They’re essentially saying the only legitimate animal welfare work is local animal welfare work,” Pacelle said. “We’re not trying to hide who we are. We shout from the rooftops that every day we fight for animals everywhere. Animals in all sorts of places, not just in animal shelters.”

Not the answer you're looking for? Browse other questions tagged zoology charities .

6
Are bugs and other pests "crawling with disease"?
8
Do Americans spend 49 billion dollars a year on pets?
14
Are bagged turtles and goldfish sold as keychains in China?
12
Are 100 million sharks killed by humans per year?
9
Does food aid cause famines?
8
Did the vast majority of animals escape 2004 December Asian tsunami?
10
Does TNVR work to reduce cat populations?
160
Is bread bad for ducks?