Does UNICEF use less than 14% of the donated money for the advertised causes?

I have heard claims from several people in relation to the occasional donation my wife or I make: that some charities have so much waste in their organization, or use so much money to market their charity work in order to get donations, that only x% of the donated money goes to the advertised cause, where x% varies from 10% to 50%.

I thought I might get some good results by Googling, but wasn't too successful: I seem to encounter specific numbers only in un-cited sources, like this one which is where I got the UNICEF/14% claim from.

Only pennies from the actual donations go to the UNICEF cause (less than $0.14 per dollar of income)

On the one hand, a charity might need to pay their employees at least something, but on the other hand requiring lots of employees to do the same work as another charity can do with a third of the cost is certainly a waste of the donated money.

Have there been proper studies of how much of the money donated to UNICEF in particular (since it is claimed to be the worst offender) is used wastefully, in the sense that the same charity work could actually be done without spending that money?

This is not the case.

All charities in the United Kingdom (excluding Scotland) are under the remit of the Charity Commission. As part of a charities registration, they are required to submit annual financial returns to the regulator, which in the case of large charities such as Unicef UK ("The United Kingdom Committee for Unicef", Charity Number 1072612) are made public for transparency.

Of the £81.25M that they spent, £63.17M was classified as charitable spending. This equates to 78% of spending reaching charitable causes. Of the remainder, only 22% was spent on further fundraising and governance whilst <1% was retained for future use.

2012: To illustrate that this trend is continuing, the spending percentages for 2012 recorded 67.4% on charitable spending. Screenshot of funding for 2012 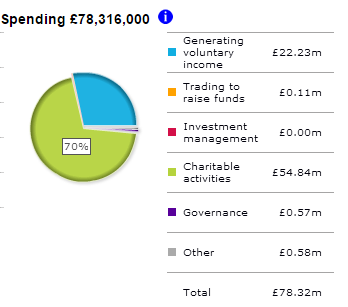 What counts as charitable spending?

The definition of this charitable spending that the Charity Commission provide (this help page) indicates that this figure only includes:

Therefore costs to simply raise awareness would be counted as "Generating voluntary income":

Meaning that the figure quoted above seem accurate - the percentages of spending given in this answer is directly helping people.

As you mentioned employees, it is worth mentioning that Unicef UK has 216 paid employees, the remainder being volunteers.

No this allegation is not true.

Charities are subject to strict auditing requirements, and UNICEF is no different. i'm going to point you at the report of Canadian UNICEF because I'm more familiar with it it. It says:

That means 76% goes to the actual programs. That's a pretty good ratio.

The Red cross is not quite as good: 16% administrative and 30% fundraising leaves 55% spent on programs. For World Vision (which your example singles out for special criticism) it is 5% and 14%, leaving 81% for programs.

Not the answer you're looking for? Browse other questions tagged economics finance charities united-nations .

11
Does using ethanol fuel save money, and is it better for the environment?
15
Does pornography bring in more money than all US sport franchises combined?
30
Does Apple have more cash reserves than the U.S. government?
17
Are Americans less prosperous and less educated than their parents for the first time?
10
Does pumping gas when the tank is half full and on the low flow setting provide an economic benefit?
256
Has Stack Overflow saved billions of dollars in programmer productivity?
9
Does nearly half the world's population live on less than $2 a day?
81
Does fossil fuels use since 1990 account for half of all the fossil fuels used in history?